Before everyone goes too far down the rabbit hole on President Trump’s “Obama had my wires tapped” tweet, I just want to remind everyone that this is what he said: 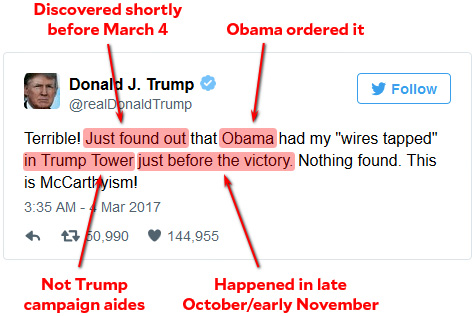 We’ve known almost from the start—because White House sources have confirmed it—that Trump based his tweet on a summary of a Mark Levin radio rant published in Breitbart News on March 3. The article is a timeline of “the known steps taken by President Barack Obama’s administration in its last months to undermine Donald Trump’s presidential campaign.” Here’s the bit that Trump was almost certainly talking about:

4. October: FISA request. The Obama administration submits a new, narrow request to the FISA court, now focused on a computer server in Trump Tower suspected of links to Russian banks. No evidence is found — but the wiretaps continue, ostensibly for national security reasons, Andrew McCarthy at National Review later notes. The Obama administration is now monitoring an opposing presidential campaign using the high-tech surveillance powers of the federal intelligence services.

Trump had “just found out” about this because he doesn’t read Slate, where the story of the suspicious server was first published, and the rest of the media didn’t give it much coverage. The “Obama” part is Trump’s typical attack dog mode. The FBI investigated the server but found no evidence of wrongdoing, and Obama himself was never involved. “Trump Tower” is because that’s where the suspicious server was. And the Slate piece ran on October 31, “just before the victory.”

Since Trump’s tweet first burst on the world, the White House communications team has feverishly looked for news sources other than Breitbart that they can credibly name as the source of Trump’s tweet. But none of them fit. The DNC hacks had nothing to do with Trump Tower. The Trump “dossier” had nothing to do with surveillance. The general investigation of Trump’s aides and their ties to Russia has been ongoing since summer, and Trump had known about it for months. He didn’t “just” find out about it. Finally, British news outlets ran stories claiming that the FBI had asked for a FISA warrant to examine Trump aides, but this wouldn’t involve Obama personally even if it did happen—and Trump made it clear in multiple tweets that he was accusing Obama personally of ordering the surveillance.

Bottom line: Trump is talking about the FBI’s brief investigation of a server in Trump Tower that communicated with a Russian bank. He read about it in Breitbart News the day before his tweet. That’s it. He has no evidence that Obama had anything to do with it; that it involved any surveillance of him personally; or, for that matter, that it involved any actual surveillance at all. Just a Breitbart piece based on a Mark Levin harangue based on a British story based on “two separate sources with links to the counter-intelligence community” that has never been confirmed by any of the legions of extremely sharp national security reporters based in the United States.

There is nothing more to this.