Apparently the CBO plans to have an official score of RepubliCare next Monday. That gives Paul Ryan three days to ram it through committee and onto the floor before the world learns just how bad his bill is. Or, maybe five days if he’s willing to work weekends. Do you think he can do it? I don’t.

While we wait, however, let’s take a look at some unofficial estimates. First, here is Edwin Park of CBPP on the Medicaid provisions of the bill:1 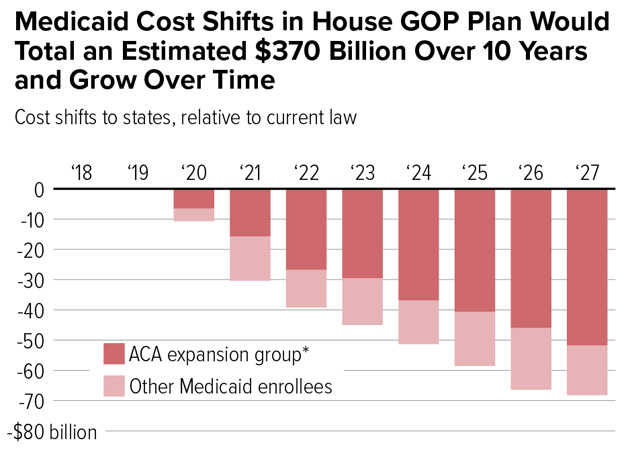 I should note that in practical terms, “shifts to states” means “cuts.” But who cares, amirite? It’s all just a bunch of poor people anyway. They may have to cut back on their iPhones and their T-bone steaks, but that’s all.

On the other hand, the cuts would also affect people that Republicans care about. Here are David Cutler and friends over at Vox:

….Over time, the value of the new tax credits under the Republican bill would erode significantly. That’s because they are indexed to grow with consumer inflation plus 1 percentage point, which is much slower than the rate medical costs are actually growing. Under the ACA, by contrast, tax credits grow in lockstep with premiums for “silver” plans, and costs are capped as a percentage of income.

Yikes! “Older individuals ages 55 to 64.” That describes a lot of Republicans. We’re certainly not going to ask them to give up their iPhones and T-bone steaks, are we? This is a real problem.

And one more thing. That business about “consumer inflation plus 1 percentage point” sounds really dry and tedious—and it is. But it’s also really important. Here’s a look at how CPI + 1 compares to medical inflation over the past few decades:

If this standard had been in place for the past three decades, subsidies would have eroded by more than a quarter. What used to be a subsidy of $1,000 would be a subsidy of $720—and you’d have to make up the difference out of your own pocket. It’s sneaky and slow, but it makes a big difference over time.

1I note that CBPP’s chartmakers have fallen prey to the PowerPoint disease of using apostrophes that point the wrong way. It’s very sad. Pretty soon, though, this will be the new standard and we’ll all just have to get used to it. Thanks, Bill Gates.