Republican senators moved Thursday to dismantle landmark internet privacy protections for consumers in the first decisive strike against telecommunications and technology regulations created during the Obama administration, and a harbinger of further deregulation.

The measure passed in a 50-to-48 vote largely along party lines. The House is expected to mirror the Senate’s action next week, followed by a signature from President Trump.

The move means Verizon, Comcast or AT&T can continue tracking and sharing people’s browsing and app activity without permission, and it alarmed consumer advocates and Democratic lawmakers. They warned that broadband providers have the widest look into Americans’ online habits, and that without the rules, the companies would have more power to collect data on people and sell sensitive information.

This kind of thing genuinely puzzles me. It’s not unexpected, but I still can’t figure out why Republicans are so hellbent on doing this. There’s nothing particularly conservative about allowing telecom companies to collect personal information without permission. Neither the general public nor the tea party base is clamoring to repeal this rule. And there’s no special reason Republicans should favor telecoms in their endless fight against content providers (Google, Facebook, etc.).

But Republicans seem to prefer a privacy free-for-all. Is this just blind opposition to something Democrats like? Part of a general attitude that big corporations should be able to do anything they want? Or perhaps it’s just a realistic appraisal of the fact that Americans seemingly don’t care much about their personal information: 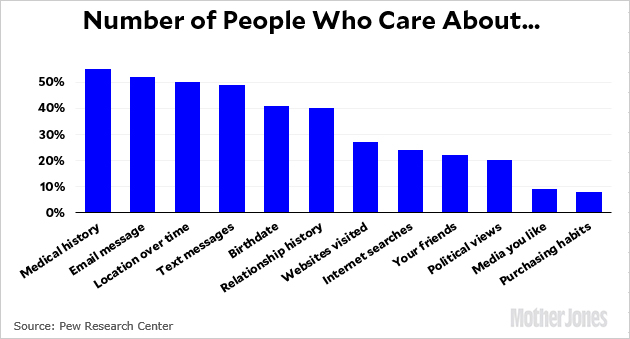 Personally, I favor very strong privacy protections. But even a more moderate view should understand that certain industries operate core infrastructure we all have to interact with: banks, credit card companies, doctors, phone companies, internet providers, and so forth. This puts them in a unique position to collect a lot of information.

But being in that position shouldn’t mean they get to do anything they want with all this information. Quite the contrary. The fact that we have essentially no choice in dealing with these folks means that privacy regulations should be especially tight on them. They shouldn’t be able to share their information with anyone else except under very specific conditions (for example, blinded scientific studies), and they should even be limited in what they can do with this information internally—especially since “internally” can mean a huge number of subsidiaries and sister corporations these days.

But for now, that’s off the table. Big telecoms will be allowed to do anything they want and only a few privacy nuts seem to care. Still, you can put me down among the 8 percent who aren’t thrilled about large corporations all having access to information about everything I buy. It’s a lonely 8 percent, but at least there are still a few of us around.