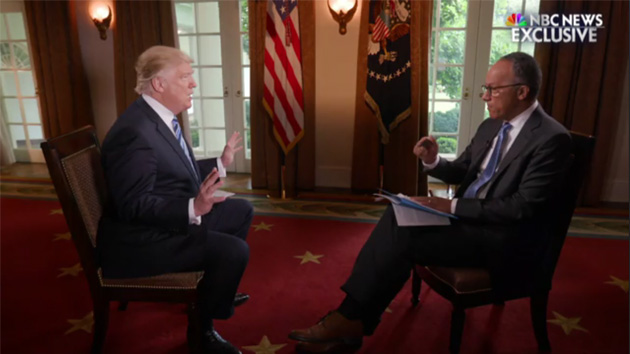 On January 26, deputy AG Sally Yates informed the White House that Mike Flynn had been compromised by the Russians. The next day, according to the New York Times, Donald Trump invited FBI director James Comey over for dinner:

As they ate, the president and Mr. Comey made small talk about the election and the crowd sizes at Mr. Trump’s rallies. The president then turned the conversation to whether Mr. Comey would pledge his loyalty to him.

Mr. Comey declined to make that pledge. Instead, Mr. Comey has recounted to others, he told Mr. Trump that he would always be honest with him, but that he was not “reliable” in the conventional political sense.

….By Mr. Comey’s account, his answer to Mr. Trump’s initial question apparently did not satisfy the president, the associates said. Later in the dinner, Mr. Trump again said to Mr. Comey that he needed his loyalty.

Mr. Comey again replied that he would give him “honesty” and did not pledge his loyalty, according to the account of the conversation.

But Mr. Trump pressed him on whether it would be “honest loyalty.”

“You will have that,” Mr. Comey told his associates he responded.

The White House denies everything about this, of course, though I imagine they’ll scramble to reverse course when Trump fires off a 3 am tweet saying that he fired Comey because he was a double-crossing backstabber or something. After all, that’s what Trump did today in his interview with NBC’s Lester Holt, describing how he decided to fire Comey:

He’s a showboat, he’s a grandstander….Regardless of recommendation, I was going to fire Comey….And in fact when I decided to just do it I said to myself, I said, “You know, this Russia thing with Trump and Russia is a made-up story, it’s an excuse by the Democrats for having lost an election that they should’ve won.”

I don’t know about you, but if I did something like that I’d keep it to myself.