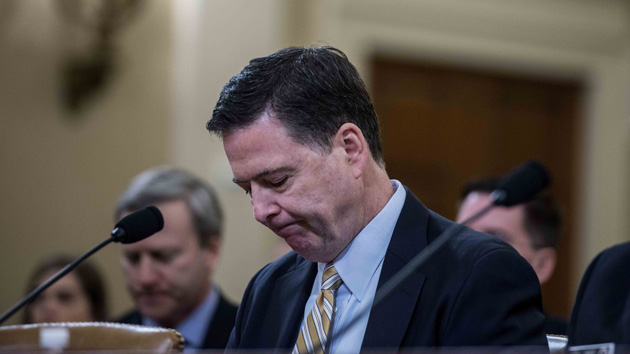 Politico has a big “inside” look at the Comey firing tonight, and it is bananas:

….Trump had grown angry with the Russia investigation — particularly Comey admitting in front of the Senate that the FBI was investigating his campaign — and that the FBI director wouldn’t support his claims that President Barack Obama had tapped his phones in Trump Tower.

….Trump received letters from Rod Rosenstein, the deputy attorney general, and Jeff Sessions, the attorney general, calling for Comey’s dismissal…[A White House spokesman] said Trump did not ask for the letters in advance, and that White House officials had no idea they were coming. But several other people familiar with the events said Trump had talked about the firing for over a week, and the letters were written to give him rationale to fire Comey.

Summary: The Comey firing had nothing to do with the Hillary Clinton email investigation. It was all because Trump was outraged over Comey’s public acknowledgement that the FBI was investigating his Russia ties. He wanted the investigation to disappear, and he began obsessing about firing Comey—presumably in hopes that this was all it would take to kill the case. And apparently Trump was shocked when Democrats didn’t line up behind him. They hate Comey too, don’t they?

Trump’s astronomical ignorance has finally caught up with him. He seems to have had no idea that firing Comey wouldn’t stop the investigation—nor that a new FBI director wouldn’t dare quash it. In fact, all the firing does is make the investigation untouchable. And Trump’s astronomical narcissism has caught up with him too. He has so little insight into other humans that he simply couldn’t conceive of anyone hating Comey but still defending his right to serve out his term. In Trump’s world, you reward your friends and punish your enemies and that’s that.

This is hardly unexpected from Trump, whose ignorance and narcissism are legendary. But does he really have nobody on his staff to warn him about this stuff? Reince Priebus surely knew how this would play out. Ditto for Mike Pence.

And one final thing: once again, we learn that many of Trump’s advisors are perfectly willing to portray him as an idiot. The Politico story is based on conversations with insiders who were happy to confirm that the Comey firing was all about Russia. This directly contradicts the White House narrative that it was about the fact that everyone had lost confidence in Comey because of the way he mistreated poor Hillary Clinton. Who are these people who work for Trump (?) but are happy to undermine him to the press on a regular basis?