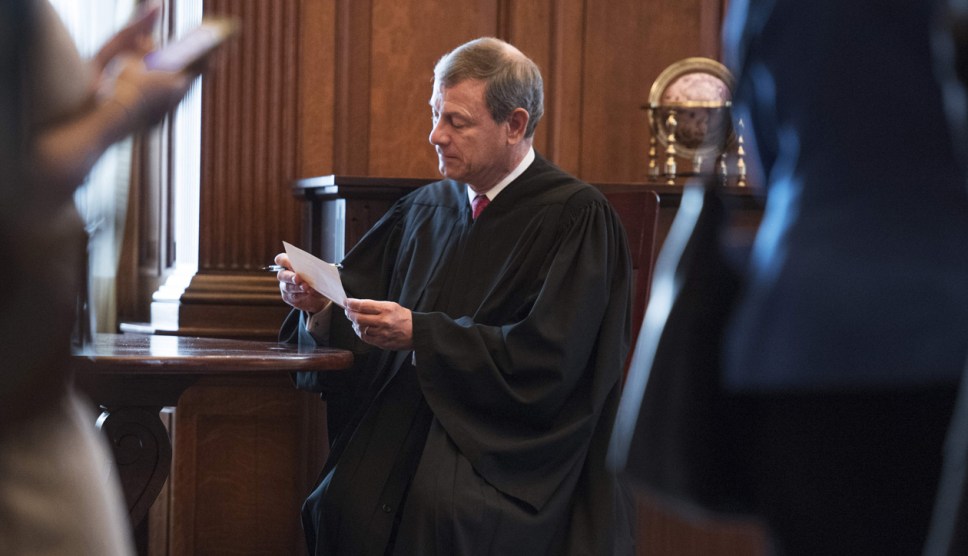 No, this is not a picture of John Roberts rereading his opinion in Shelby vs. Holder. But maybe he should.Tom Williams/Congressional Quarterly/Newscom via ZUMA

The majority opinion by Judge Wynn is an unqualified victory for the plaintiffs, finding multiple grounds (including equal protection, the First Amendment, and the Elections Clause) for ruling that North Carolina’s plan is unconstitutional.

The result is not a big surprise given what North Carolina did here. After its earlier redistricting was declared a racial gerrymander, it came up with a new plan using only political data that it described as a partisan gerrymander on its own terms. It did this as a defense against a future racial gerrymandering claim. As the court explained at page 16, NC “Representative Lewis said that he “propose[d] that [the Committee] draw the maps to give a partisan advantage to 10 Republicans and 3 Democrats because [he] d[id] not believe it[ would be] possible to draw a map with 11 Republicans and 2 Democrats.” If there’s any case that could be a partisan gerrymander, it’s this one.

The Supreme Court is already considering two partisan gerrymandering cases, one from Wisconsin and one from Maryland. No doubt NC will appeal this case to the Supreme Court, which is likely to hold it in light of the decision in those cases (it would be too late, absent extraordinary briefing, to set the case for argument this term). It likely will be sent back to this court to reconsider in light of what the Court does.

In the unanimous opinion, Judge James Wynn writes that legislators never argued that their plan was designed to do anything other than favor Republicans:

Legislative Defendants also do not argue—and have never argued—that the 2016 Plan’s intentional disfavoring of supporters of non-Republican candidates advances any democratic, constitutional, or public interest. Nor could they. Neither the Supreme Court nor any lower court has recognized any such interest furthered by partisan gerrymandering—“the drawing of legislative district lines to subordinate adherents of one political party and entrench a rival party in power.” And, as further detailed below, partisan gerrymandering runs contrary to numerous fundamental democratic principles and individual rights enshrined in the Constitution.

Rather than seeking to advance any democratic or constitutional interest, the state legislator responsible for drawing the 2016 Plan said he drew the map to advantage Republican candidates because he “think[s] electing Republicans is better than electing Democrats.” But that is not a choice the Constitution allows legislative mapdrawers to make. Rather, “the core principle of [our] republican government [is] that the voters should choose their representatives, not the other way around.”

Not only does this ruling come after a previous map was tossed out for racial gerrymandering, but it comes only 18 months after a court struck down North Carolina’s new voting laws too. The court gave the North Carolina legislature two weeks to produce a new map.

I wonder what Chief Justice John Roberts thinks of all this? He was the deciding vote to gut the Voting Rights Act on the grounds that it wasn’t really needed anymore because we live in a more enlightened age.¹ The next day² Republican leaders in North Carolina announced their intention to enact new election laws. Over the next couple of years, North Carolina tried to enact a racial gerrymander of its legislative districts that was struck down; passed a voting law that was overturned because it was designed to “target African Americans with almost surgical precision”; passed a racial gerrymander of its congressional districts that was struck down; and then produced yet another gerrymandered map that tried to hide the original’s intent by favoring Republicans instead of whites.

If North Carolina had still needed preclearance from the Justice Department for this stuff, it never would have seen the light of day. But as soon as preclearance was gone, racial targeting was instantly back on the menu. The same thing has happened in other states too. The big difference is that North Carolina’s Republicans are unusually stupid and never even bothered to hide what they were doing. Republicans in most other states at least made a pretense that race had nothing to do with their voting law changes.

Roberts’ decision was basically an empirical one: he wrote that requiring preclearance wasn’t unconstitutional per se, but it did need to be based on evidence that racial discrimination still existed. Given what’s happened since, I wonder if he’s had second thoughts? After all, we don’t really have to rely on arguments over demographics and social science anymore. We just have to look at what’s actually happening now that Southern states are freed of most constraints. It’s not pretty.

¹I want to note that this isn’t really snark. It’s a pretty fair summary of what Roberts wrote in Shelby County v. Holder.

²Seriously. It was literally the day after the Supreme Court handed down its opinion. See p. 10 of the court decision overturning North Carolina’s election law.