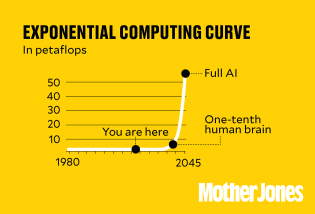 Things are slow this morning, so I’m going to rail against one of my pet peeves: analogies to the Industrial Revolution as evidence that robots won’t reduce employment. My victim today is Heather Long at Wonkblog:

History suggests new jobs will replace old ones. As the Industrial Revolution demonstrated, technological transformations create new jobs no one has thought of yet. The same trend appears to be happening today.

Companies shed workers during the Great Recession and rapidly tried to cut costs, including by introducing more machines on assembly lines and in fast casual restaurants like Panera, where you can now order on a touch screen. Yet even with those trends, the U.S. economy has added more than 16.4 million jobs since the low point for employment in December 2009.

“Tom Cotton is woefully misinformed,” said Joe Brusuelas, chief economist at RSM. “Robots will create more jobs.” Brusuelas points out that many of the fastest-growing jobs today, such as “user design” and “cloud engineers,” weren’t around a decade ago. We like to talk about how robots kill jobs, but we tend to talk a lot less about how many other jobs are being created in the economy.

Ah yes: user design and cloud engineers. All those displaced truck drivers will just transition into Silicon Valley engineering jobs. Sure they will.

In fact, it’s vanishingly unlikely that the AI Revolution will work the same way as the Industrial Revolution. The latter displaced human muscle power, but all those machines still had to be run by humans with brains. That’s where the new jobs came from. The AI Revolution will displace human brainpower, and that means there will be nothing left for most humans to do. If a robot is both mentally and physically equal (or superior) to a human being, then by definition they can do whatever a human can do. We don’t have to argue one by one about every job category, or even think about every possible new job that might be created in their place. The answer to all of them is: robots will do that too.

Now, if you don’t think AI will ever get to human level, that’s fine. Then the AI Revolution will never happen. I’d still argue that enough of it will happen to cause considerable upheaval, but now we’re in a technological argument. What happens, for example, if AI and robotics get smart enough to perform all unskilled and semiskilled labor, but never advance further than that? We won’t have 100 percent unemployment, but we’ll have 30-40 percent unemployment, and that strikes me as still a big enough problem to worry about.

However, if you accept that AI will eventually get to human level, then yes, robots will take all our jobs. And they’ll take all the new jobs too.

As for Cotton, though, he’s also wrong. There’s no conflict between the American economy needing more workers in the short term but being in danger of having too many workers in the longer term. Today we’re short of workers. In 20 years we’ll be wondering what to do with all the workers we have. There’s no reason to think those two things are in tension.

¹I say “class of workers” because many of the actual workers displaced by the Industrial Revolution were indeed put out of jobs. It was only later that other jobs cropped up to replace them. Workers of similar skill levels then took those jobs, but that was no help to the original folks who had lost their livelihoods.