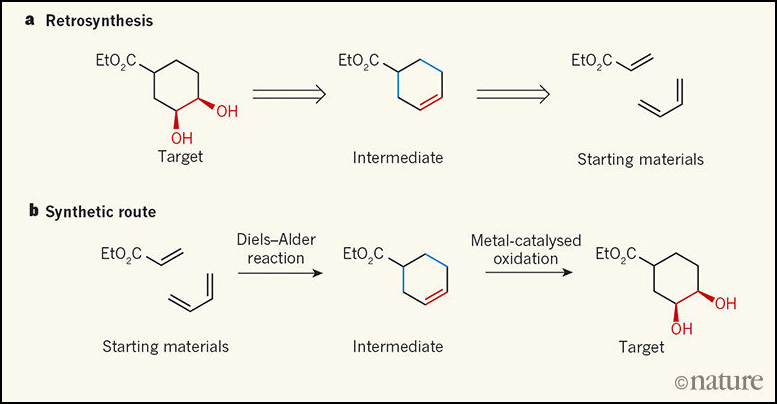 Back in 1984, when I got my first job in the tech industry, human beings created circuit boards. Engineers designed them, and then other people figured out how to fit all the chips onto a board and connect them to each other in the proper way (this is called “routing”). It’s a tricky task, and it got trickier as circuit boards got denser and more complex.

Wait. What was the last one again? Here is biochemist Derek Lowe on a new piece of software for performing retrosynthesis, the process by which chemists create blueprints for constructing organic molecules:

Organic synthesis is a lot harder to reduce to game-type evaluation than chess is, as the authors rightly point out. To get around this, the program combines neural-network processing with a Monte Carlo tree search technique….What the authors did…was have the program generate retrosyntheses for already-synthesized molecules, and then have these routes and the known ones evaluated blind by experienced chemists. The results were a toss-up: the machine routes were considered just as plausible or desirable as the human ones, and that (as above) is a victory for the machine. AI wins ties.

….Where does that put us? And by “us”, I mean “us synthetic chemists”. My conclusions from the earlier paper stand: we are going to have to get used to this, because if the software is not coming to take retrosynthetic planning away from us now, it will do so shortly….It’s not that this new software is coming up with routes that no human would be able to. But if we’re approaching “good as a human”, the next step is always “even better than a human”. Eventually — and not that long from now — such programs are going to go on to generate “Hey, why didn’t I think of that” routes, but you know what? Those of us in the field now are going to be the only ones saying that. The next generation of chemists won’t bother.

I want to emphasize, as usual, that this is still not AI. However, it uses techniques that are to AI what Robert Goddard’s model rockets were to the Apollo program. Goddard didn’t know for sure that what he was doing could be scaled up to man-on-the-moon size, just as we don’t know for sure that current deep-learning algorithms can eventually form the basis for AI. But the odds seem pretty good. In time, our current algorithms will seem like little more than toylike proofs of concept, but they’ll still be the starting point. Lowe says the next generation of chemists won’t bother with synthetic transformation routes, but of course that’s only the beginning. Eventually, they won’t bother with creating new molecules at all. A computer will do it.

So who will be put out of work first? Truck drivers or pharmaceutical biochemists? Is anyone taking bets?