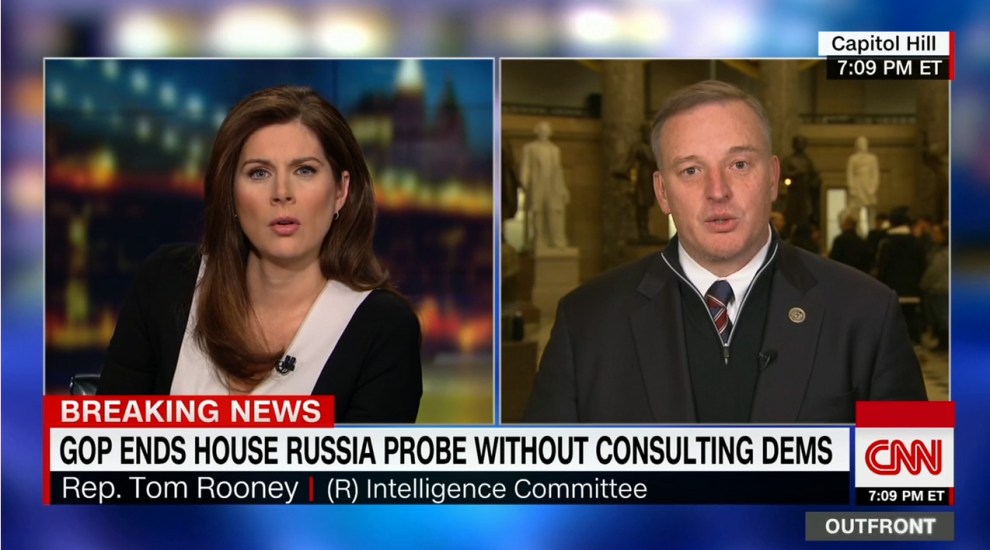 Breaking news, folks. A Republican congressional committee says that a Republican president has done nothing wrong:

THE HOUSE INTELLIGENCE COMMITTEE HAS, AFTER A 14 MONTH LONG IN-DEPTH INVESTIGATION, FOUND NO EVIDENCE OF COLLUSION OR COORDINATION BETWEEN THE TRUMP CAMPAIGN AND RUSSIA TO INFLUENCE THE 2016 PRESIDENTIAL ELECTION.

But not every Republican agreed. Rep. Tom Rooney stopped by Erin Burnett’s show on CNN and said the whole investigation was a farce:

Rep. Tom Rooney (R-Fla.), a member of the House Intelligence Committee, said on Monday that “there is evidence” showing the Russians attempted to help Trump during the 2016 presidential election, contradicting a draft report from the panel.

….Burnett pointed out that “the intelligence community had said” Moscow’s intention “was to hurt Hillary Clinton,” and that the Kremlin “wanted to explicitly help Donald Trump.” Rooney responded: “Yes, I believe there’s evidence of everything that you just said.”

….Rooney argued that the investigation needed to end because the committee was losing its credibility. “We’ve gone completely off the rails and now we are just basically a political forum for people to leak information to drive the day’s news,” Rooney said. “We’ve lost all credibility and we are going to issue probably two different reports, unfortunately.”

Do I even need to tell you that Rooney is retiring this year? It’s pretty amazing what Republicans are willing to say once they decide not to run for reelection.