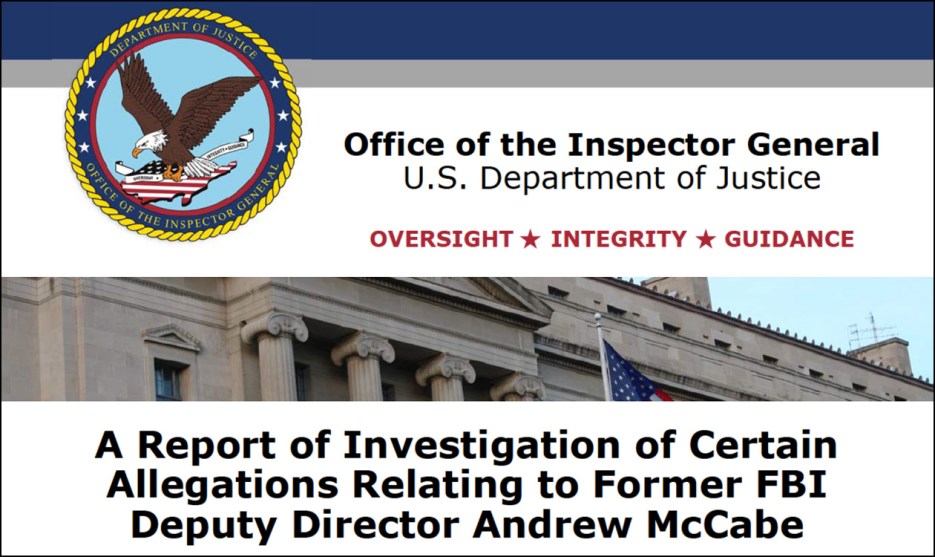 A few weeks ago, the Justice Department’s inspector general rushed out a draft copy of its report on Andrew McCabe to Attorney General Jeff Sessions. Why? So that Sessions could fire McCabe 26 hours before he qualified for his full pension and retired.

Well, the final report has now been released and I’ve read it. But first, here are the background facts:

Everyone accepts this as the basic background of the case. What’s more, as deputy director, McCabe was authorized to speak to the press on background or to allow others to do it for him. The question is: did McCabe lie about authorizing this disclosure to the Journal? The inspector general says he did, and lays out the following timeline:

McCabe has defended himself against all the charges:

I don’t know any more about this than anyone else, but McCabe’s defense sounds sort of sketchy. That said, this whole thing is over the most trivial and common kind of leak imaginable: a senior official defending himself and the bureau—truthfully—against a newspaper article that was objectively incorrect.¹ The information McCabe leaked was intended to defend both himself and the integrity of the FBI, and it was literally no more than a sentence or two that was completely harmless. The biggest charge is that McCabe’s leak effectively confirmed that the FBI was investigating the Clinton Foundation, but was anyone really in any doubt about that anyway?

I dunno. The inspector general didn’t believe McCabe’s story and concluded that he had “lacked candor.” Maybe that’s a firing offense no matter what the issue is and no matter who does it. But it sure sounds to me like the kind of thing that wouldn’t normally get a guy fired 26 hours before his retirement unless the president of the United States was gunning for him. Obviously Trump was, and he issued his usual unhinged gloating over the downfall of an enemy after the inspector general’s report was released:

DOJ just issued the McCabe report – which is a total disaster. He LIED! LIED! LIED! McCabe was totally controlled by Comey – McCabe is Comey!! No collusion, all made up by this den of thieves and lowlifes!

¹And not just incorrect: it was part of a coordinated campaign of character assassination from a presidential campaign.