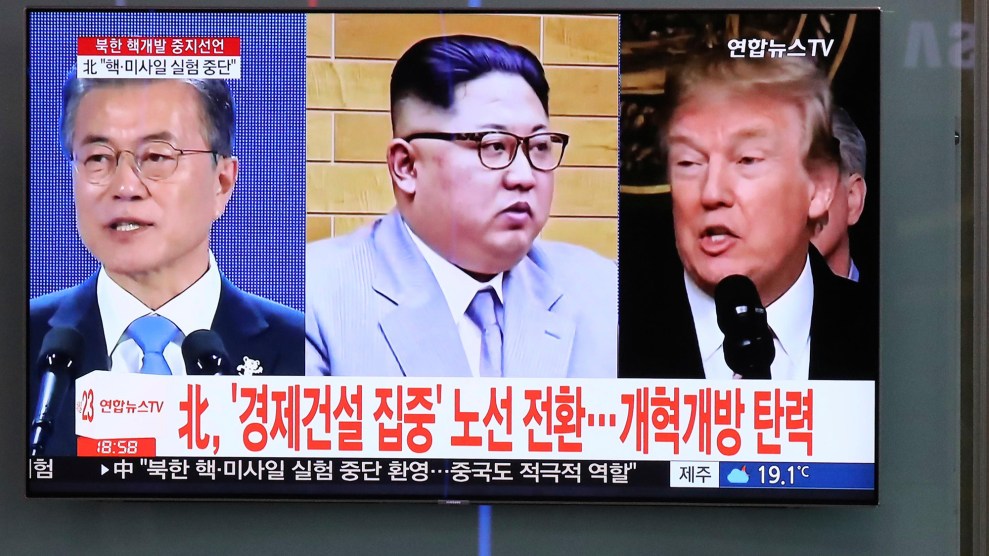 What does Donald Trump’s stance on the Iran deal have to do with his relationship with North Korea? It turns out, quite a lot.

That’s because the president’s desire to pull out of a historic nuclear deal with Iran could likely hurt his chances of reaching a significant weapons agreement with Pyongyang. There’s a simple reason why, experts tell me: If Trump backtracks on America’s promises to Tehran, then North Korean leader Kim Jong Un has no reason to trust Trump during negotiations about Pyongyang’s nuclear and missile programs.

I think this is backward. It assumes that Kim will conclude that Trump can’t be trusted to keep his word. But if Kim is smart, that’s not at all what he’ll assume.

What is it that motivates Trump? We’ve all said it a million times: taking revenge on Barack Obama. And more generally, taking revenge on the political and cultural elites that have mocked him his entire life. Trump isn’t especially notorious for breaking his word, but he is notorious for nursing eternal dreams of vengeance against his enemies.

It hardly takes 3D chess analogies to figure out what this means. Obama couldn’t make a deal with Kim, which means Trump desperately wants to. Foreign policy elites have long declared North Korea a rogue state, so Trump wants to show that they were just too stupid to figure out how to handle the Kim family. And if Trump does make a deal, it will be his deal. He’ll defend it loudly and passionately no matter what. A nuclear missile could be in the air a minute from the White House and Trump would still be claiming that he made a great deal with Kim.

Now, this doesn’t mean that Trump will agree to anything. At the very least, his advisors will make sure of that. But killing the Iran deal is a very clear confirmation of his temperament: he may hate other people’s deals, but as long as it’s Trump’s deal—and the Obamas of the world disparage it—he can be trusted to stick with it. I’d guess that the odds of a deal with North Korea are now a bit better than they were a month ago.

POSTSCRIPT: Will it be a good deal? Will we get it quickly? I don’t know. But Kim probably understands his own leverage better than before. He knows what Trump wants, and that will make it a little easier to construct an agreement he’s likely to accept.