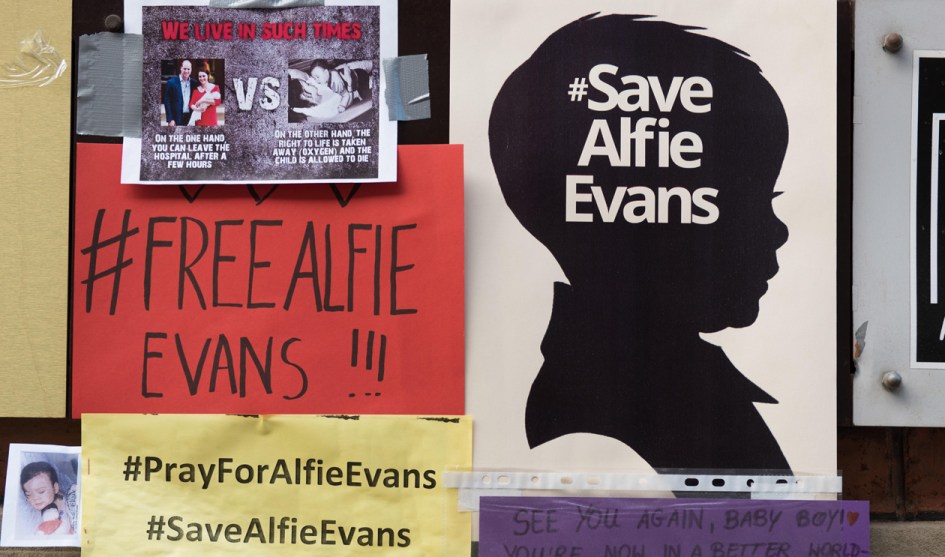 Alfie Evans was a two-year-old British infant who suffered from an irreversible neuro-degenerative disease that destroyed his brain and caused persistent seizures. His doctors eventually concluded that Alfie had lost all brain activity and recommended he be taken off life support. His parents fought this, but lost in court. At the end, they asked for permission to transfer him to a Vatican hospital, but that was refused too. Alfie died two days after his respirator was unhooked.

Megan McArdle wrote a column suggesting that in cases like this the wishes of the parents should be given greater weight. In a follow-up, she wrote this:

If a court is going to overrule parents who are trying to keep their child alive, then for the reasons laid out in the column, I demand a high burden of proof….This, I think, was part of the vitriol I triggered. After years of writing about health care, I have a great respect for doctors. But I also respect the limitations of what they can know. And I think a grave mistake of late modern liberalism is to overestimate the powers of science and expertise.

Those powers are great, mind you; through science and expertise, we have conquered all sorts of disease and hunger and general human misery. I admire these achievements as much as anyone. But it’s no good tearing down ignorance and superstition if we just erect an idol to science in its place — which some of my interlocutors seemed perilously close to doing. Imperiously informing me that the courts were very careful and serious about their decision does not go very far towards proving that those judges were right. Stating that all the experts agreed about the decision simply begs us to ask the question: “Experts in what?”

Alfie’s case is not the first of this type. And who knows? Maybe British law should be changed. But Alfie was examined by nearly a dozen doctors. Consultants from outside were called in. Alfie’s parents retained their own doctors. All of them concluded the same thing, based on MRI scans, EEGs, and various other tests. The judge in the case summarized it like this:

The scan of 2 February 2018 confirmed the progressive destruction of the white matter of the brain which Dr R interpreted as now appearing almost identical to water and cerebrospinal fluid (CSF). In addition, new areas of signal abnormality were demonstrated in the deep grey matter of the basal ganglia. The thalami, which I have been told fire the pathways within the white matter which generate sensory perception is, Dr R points out, effectively invisible in the scan. In simple terms the thalami, basal ganglia, the vast majority of the white matter of the brain and a significant degree of the cortex have been wiped out by this remorseless degenerative condition.

One of Alfie’s primary doctors said this:

I believe that it is unlikely that Alfie feels pain or has sensation of discomfort but I cannot be completely certain of this….The continuation of active intensive care treatment is futile and may well be causing him distress and suffering. It is therefore my opinion that it is not in Alfie’s best interests to further prolong the current invasive treatment.

This is not a case in which “experts in what?” is a reasonable question. The burden of proof wasn’t just high, it was immense—and yet there still wasn’t the slightest dispute. Alfie Evans was not “disabled.” He was brain dead:

Professor Cross was clear that there was little in the way of reactive response. The EEG she told me was “markedly attenuated” which she clarified as “essentially flat”.

Despite this, Alfie became a cause célèbre on the pro-life right. The general tenor of their criticism was that the abortion lobby was no longer satisfied with killing infants in the womb. Now they wanted to kill them after they were born based on nothing more than their opinion about Alfie’s quality of life.

I find it puzzling that this is a hill they want to die on. It’s much like the Terry Schiavo case, and in both cases the pro-life folks were defending the notion that a person could still be alive even if their brain was all but destroyed. Why? There are always judgment calls to be made about when life ends, but lack of brain activity is pretty clear cut. In the case of Alfie Evans, his parents were effectively performing an experiment to see how long a brain-dead child’s heart can be kept beating.

In the past week conspiracy theories have flourished. Alfie was killed by a nurse while the parents were out of the room. Alfie was given a cocktail of four mysterious drugs shortly before he was taken off the ventilator. Alfie was killed by aluminum from vaccines. This is pizzagate territory, and it’s put hospital staff in considerable danger. There’s a real cost to this stuff.

Still and all, there’s one more thing: why weren’t Alfie’s parents allowed to transfer him to the Vatican hospital? It would have been paid for privately, after all. What’s the harm?

I don’t know. If I were the judge, maybe I would have allowed it. But this case was heard by half a dozen different courts, all of which ruled the same way. The evidence was absolutely clear that nothing could help Alfie, not in Britain and not in the Vatican. And keep in mind that the law is designed to protect more than one interest. For example, the law is designed to protect patients from charlatans who make promises they can’t deliver. A judge will naturally consider whether the pro-Alfie forces actually had Alfie’s best interests at heart, or if they were cruelly prolonging his parents’ pain for little more than cynical ideological purposes. A judge will also bring a certain distance to the case. It’s natural that parents will never give up on a sick child, but when that child is effectively dead it might be time for someone to gently but firmly insist that they face the truth and move on.

Is that the place of a judge? We can have that argument. But wouldn’t it be better to have that argument in a case that’s genuinely on the bubble rather than a case in which it’s absolutely indisputable that the child’s brain is gone? Why is the pro-life right so attached to cases like this? Keeping the heart beating in a brain-dead child really doesn’t seem to serve anyone’s purpose.