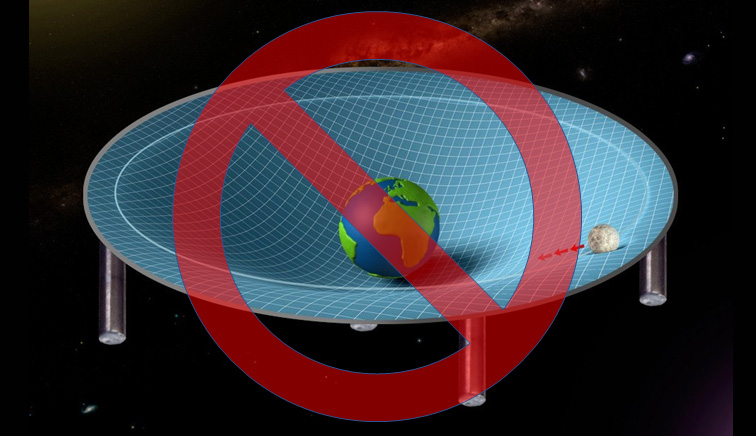 This common illustration of how gravity works in general relativity is possibly the worst scientific analogy ever invented. It should be banned forever.

Yesterday I mentioned in passing that the product of my dex-fueled nights a couple of years ago was a tutorial on special and general relativity. Why? Beats me. Ask the dex.

Several people have asked me to post this masterpiece of pop science, but I’m afraid I can’t do that. Before I explain that, though, here were my goals. I wanted to explain relativity without using a number of tropes that are almost universal in relativity books:

Beyond this, my overarching goal was to try to persuade readers that time and space really are inextricably linked together. That is, I wanted to do it in a way that threaded through the entire tutorial and eventually made sense emotionally, not just mathematically. This is, I think, not truly possible thanks to the wiring of our brains, but I wanted to get close.

Now, some of these tropes, like the first two bullets, are just plain hard to understand if you don’t have any background. That’s why I wanted to avoid using them. Some, like the traditional “trampoline” to illustrate gravity in general relativity, are wildly misleading. And the last bullet is a two-edged sword: there’s no hard math, but there is math. I’m not convinced that you can do even a modestly decent job of explaining relativity with literally no math.

Anyway, I mostly accomplished this, although I think I may have caved in and finally mentioned inertial frames toward the end. So why can’t I post it? Is it because I’m embarrassed to let people see my writing? Please. Is it because I’m afraid of criticism? Nah. My overarching goal, after all, was to talk about relativity very differently than it’s normally talked about, and this is bound to attract boatloads of criticism.¹ It’s all part of the job.

No, the problem is that my tutorial is wrong. At least, I’m pretty sure it’s wrong. There were some parts at the beginning that I never did quite manage to pound into shape before my doctor stopped the dex and I lost interest. There are also one or two things later on that might be right, but might also be wrong, and I never quite figured them out. I don’t mind getting beat up for being wrong, but I’m not really willing to publish stuff that I already know is probably wrong.

On the bright side, in a couple of weeks I’ll be taking the evil dex once a week, which means I’ll have one night a week that I’m wide awake and twiddling my thumbs looking for something to do. So maybe I’ll take another look and see if I have some new ideas for how to fix it up. If I do, you’ll be the first to know.

¹This is especially true among relativity mavens, who all seem to have an almost religious view of the “proper” interpretation of the math.