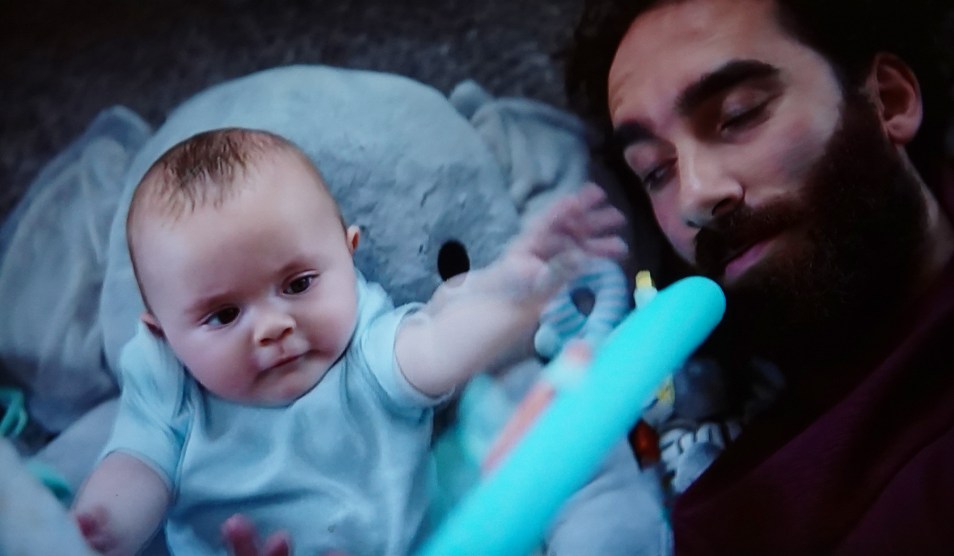 I turned on the TV for a few minutes to snap some pictures of commercials, and boy howdy did I see plenty of white men. Of course, some of them were like this guy, forced to take care of the baby because the femlibs have totally emasculated us. Plus, there were plenty of black men and women in the commercials too.

Here’s an interesting sort of story. Over at the Washington Post, Monica Hesse tells us about her Facebook friend Tom, who is unhappy at the increasing absence of white men on TV. So she sent him a couple of studies showing that TV still had plenty of white men. It didn’t work. Eventually they agreed to a test:

A scientific experiment was Tom’s idea. He’s a data guy; he likes experiments. In this one, we’d make our own data by watching an hour of the same channel, coding ads by gender, by voice-over vs. on-screen appearance, main actor vs. extra….He suggested the experiment would be a win-win for him. “Either I get to prove you wrong, or I’m wrong, and the world is less scary than I think it is.”

“In reviewing these statistics, I have to change my opinion. They do represent the population fairly well. There are some commercials that don’t have any white males in them, but this is to be expected.”

His spreadsheet matched mine, but the email was still stunning. Had his mind really changed? Over an hour-long experiment? A few days later I phoned him, certain I’d missed something. Nope. “Give yourself a win,” he said. Something about that analytical-viewing hour had been cathartic. He’d begun reminding himself, for example, that if there was no man in one ad, there might have been in the previous one.

Unfortunately, this experiment entirely misses the point, and I’m surprised that neither of our participants noticed it. What Tom said was that he saw fewer white men on TV. To test that, you’d need to pick random hours of commercials over the past few decades and see what the trendline looks like. But there’s not much point in wasting your time: the number of white men has declined. We all know this. It’s because TV was overwhelmingly white up through the 60s, and after that people of color started agitating for change. The result—slowly but steadily—is more blacks, more Hispanics, more Asians, more women, and by simple arithmetic, fewer white men.

That said, about 30 percent of Americans are white men, and I’m willing to bet that the average TV commercial still features more than 30 percent white men. The problem is (a) most whites live among other whites and assume that the percentage is higher, and (b) there are a lot more blacks and Hispanics in TV commercials these days. My guess is that Tom has only barely noticed the decline of white men, which has maybe gone down from 40 percent to 35 percent over the past decade, but has noticed the growth of blacks of both genders, which has maybe gone from 8 percent to 12 percent. The absolute numbers may be small, but that’s an increase of half for blacks, while the decrease in whites is about a tenth.¹

So we’re back to where we started. The fact is that Tom is basically right: there are fewer white men and more people of color on his TV. This has been a deliberate change, and as he acknowledges, it fairly represents America—or is getting closer to it, anyway. The question is what we can do to make this less scary to white men—and yes, it matters that we do this. If your attitude is “suck it up, snowflake,” then we’re likely to get a lot more Donald Trumps in the future. That may not be fair, but the fact is that we have to suck it up and deal with it if we want a better, more tolerant, less fearful country casting ballots every two years. So what are we going to do about it?

¹I pulled these numbers out of thin air just to illustrate a point. I have no idea what the real figures are or how to find them.