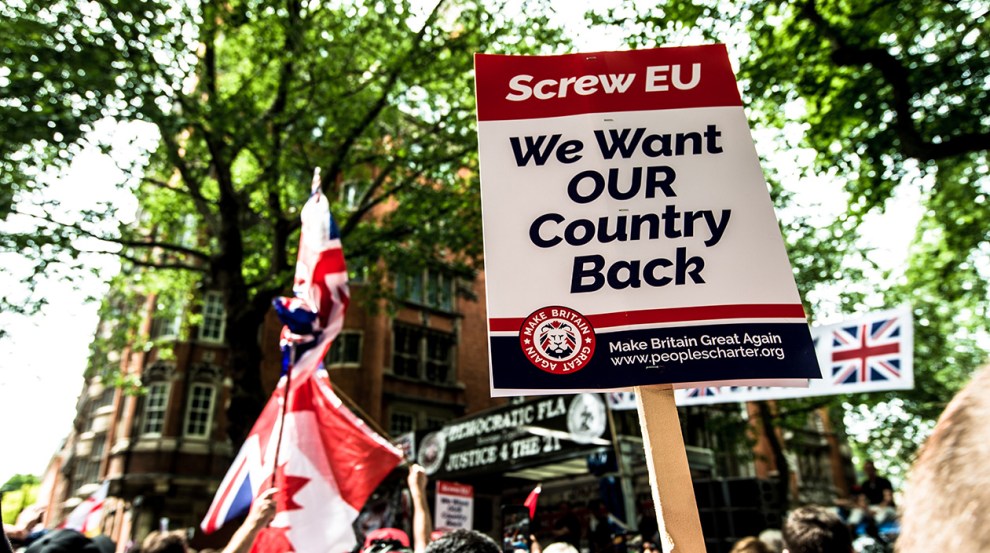 We are now eight months away from Brexit. In theory, the terms of Brexit will be dictated by whatever agreements are hammered out between the UK and the EU, but damn little progress has been made so far and there’s not much time left. So what happens if Der Tag arrives and no agreements have been agreed to?

What’s the likelihood of that happening? On the one hand, this kind of negotiation is massively complex, and we’re getting to the point where there’s just flatly not time to do it. On the other hand, we’ve seen before that deadlines can be wonderful motivators. When we get down to the final few weeks and panic starts to set in, it might turn out that both sides have a little more flexibility than they’ve admitted so far. And on the third hand, it’s even possible that if the EU sticks to its guns and panic turns into hysteria, Britain might call off Brexit entirely. Parliament certainly has the power to do this if it’s so inclined.

So just what kind of panic and hysteria am I talking about? I now turn the microphone over to Charlie Stross, who puts both his narrative talents and his political cynicism to work explaining just what he thinks no-deal Brexit might look like:

The EU is the UK’s largest trading partner, with roughly 44% of all our foreign trade going through our EU siblings. This includes food—the cramped, densely populated UK hasn’t been self-sufficient in food since the 19th century, and we import more than 50% of what we eat.

A customs union with the EU has been ruled out unless the UK agrees to cooperate with certain EU “red line” requirements—essentially the basis for continuing free trade: for reasons too preposterous and stupid to go into this is unacceptable to the Conservative party even when national food security is in jeopardy. In event of a no-deal Brexit, Operation Stack will become permanent, causing gridlock on motorway routes approaching Channel ports. Perishable goods and foodstuffs will be caught up in unpredictable protracted delays, resulting in dairy produce (including infant formula) becoming ‘very scarce’. Large manufacturing concerns with cross-border supply chains such as BMW, Airbus, and Toyota are threatening to shut down production in the UK in event of a hard Brexit; Amazon’s UK manager warns of civil unrest in event of a no-deal Brexit, and in event of a no-deal that doesn’t include services (as well as goods) it’s hard to see how the Amazon supply chain can continue to function in the UK.

….Current warnings are that a no-deal Brexit would see trade at the port of Dover collapse on day one, cutting the UK off from the continent; supermarkets in Scotland will run out of food within a couple of days, and hospitals will run out of medicines within a couple of weeks. After two weeks we’d be running out of fuel as well. Note that this warning comes from the civil service, not anti-Brexit campaigners, and is a medium-bad scenario—the existence of an “Armageddon scenario” has been mooted but its contents not disclosed.

In the past month, the Health Secretary has admitted that the government is making plans to stockpile vital blood products and medicines in case of a no-deal Brexit, and the Brexit secretary is allegedly making plans to ensure there are “adequate food supplies” to cover a no-deal exit.

….A Hard Brexit, on its own, would be a very dubious but probably long-term survivable scenario, with the UK economy taking a hit not much worse than the 10% downsizing Margaret Thatcher inflicted on it in 1979-80. But a hard Brexit, coinciding with the worst harvest failures in decades, ongoing climate destabilization, a fisheries collapse, and a global trade war being started by the Tangerine Shitgibbon in the White House is … well, I’m not optimistic.

Right now, the British cabinet seems to be locked in a suicide pact with itself. Theresa May is too weak to beat back the cabal of unscrupulous opportunists within her own party who want the worst to happen—the disaster capitalists, crooked market short-sellers, and swivel-eyed imperialist revenants of the European Research Group. Any replacement Conservative PM would face exactly the same impedance mismatch between reality and his or her back bench MPs. On the other side of the house, Jeremy Corbyn’s dislike for the EU as a capitalist entity has combined with his fear of alienating the minority of “legitimate concerns” racist voters in Labour’s base so that he’s unwilling or unable to adopt an anti-Brexit stance.

….What happens next? On a micro scale: I’m stockpiling enough essential medicines to keep me alive for six months, and will in due course try and stockpile enough food for a couple of weeks. I’m also going to try and move as much of my savings into other currencies as possible, preferably in financial institutions accessible from but outside the UK. (I expect a Sterling crisis to follow promptly in event of NDB. We saw Sterling drop 10% the day after the referendum—and certain people made a fuck-ton of money by shorting the stock market; I expect it to go into free fall if our trade with the EU is suddenly guillotined.)

Maybe Charlie is just a worrier? But at least he’s an entertaining one—as long as you live in some other country, of course. And I have to admit that if you put a gun to my head and forced me to make a prediction, I’d say that some kind of panic-induced shambles of an agreement will be cobbled together at the last minute, preventing the worst from happening. Details will then be worked out over the next decade or so, since Britain and the EU don’t have anything better to do with their time, do they?

In the meantime, I’d guess that China and Russia can barely conceal their incredible good fortune in watching both the US and the EU create completely unnecessary domestic chaos just at a time when both countries have problems of their own and could use a little economic breathing space. We live in interesting times.