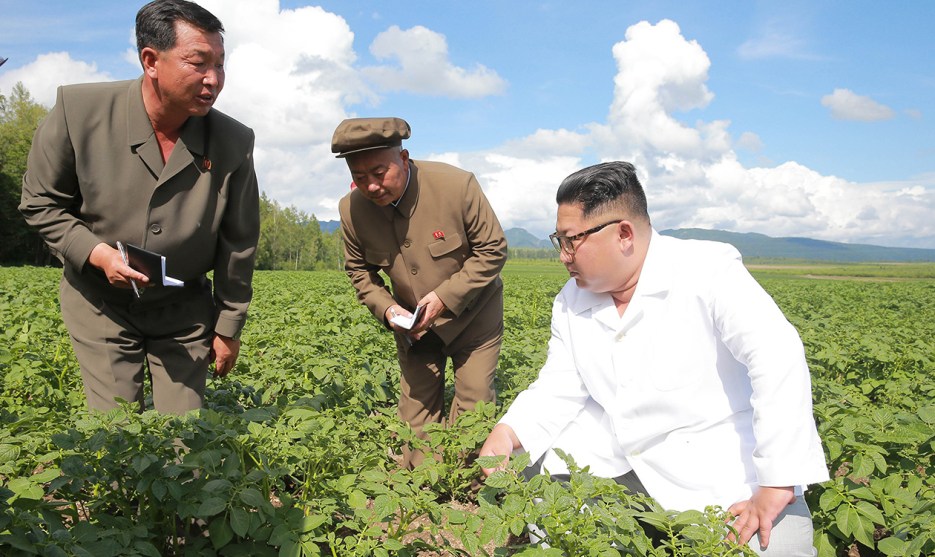 North Korea's Supreme Leader Kim Jong Un instructs his top agronomists in the fine points of potato horticulture last Saturday. He was supposed to meet with Secretary of State Mike Pompeo that day, but somehow their schedules got crossed up and Kim didn't make it.Yonhap News/Newscom via ZUMA

Our relationship with North Korea is getting stronger all the time thanks to President Trump:

North Korean officials did not turn up to a Thursday meeting with the U.S. military about repatriating the remains of the war dead, according to a U.S. official with knowledge of the situation. The two sides had been expected to meet at the Korean Peninsula’s demilitarized zone and discuss the return of U.S. troop remains from the 1950-1953 war — an arrangement that the State Department had announced after Secretary of State Mike Pompeo’s visit to Pyongyang last Friday and Saturday.

….On Thursday, however, Department of Defense and United Nations Command officials were left waiting in the DMZ’s Joint Security Area. The expected North Korean officials never arrived, according to the official who requested anonymity as he was not permitted to talk publicly about the event. “We were ready,” the official said. “It just didn’t happen. They didn’t show.”

This is so unlike North Korea. Maybe Trump needs to pick up the phone and make a personal call to his friend Kim. Or send Dennis Rodman to straighten things out. I’m sure it was just a misunderstanding. Probably they were using Outlook and our guys were using Google Calendar and they failed to synchronize or something. It happens.