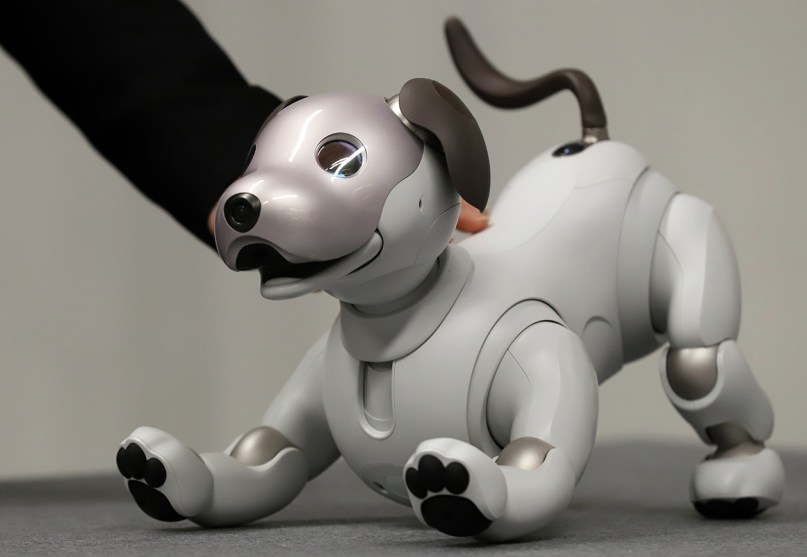 Sony ended production of its robot dog, Aibo, more than a decade ago, but now it’s back and better than ever. The robotics are better, the intelligence is better, and—well, let’s allow Washington Post tech columnist Geoffrey Fowler to explain:

Aside from walking around the house, barking and performing a few tricks, Aibo doesn’t do a whole lot. It can’t play music or answer trivia like a smart speaker, though those would be welcome additions.

Yet here’s why Aibo matters: Despite all those limitations, I fell for it. Over two weeks of robot foster parenting, almost every person I introduced to Aibo went a little gaga. The Amazon Echo and Google Home speakers got us to open our homes to new ways to interact with computers. Aibo offers a glimpse of how tech companies will get us to treat them more like members of the family. Affectionate robots have the potential to comfort, teach and connect us to new experiences — as well as manipulate us in ways we’ve not quite encountered before.

Aibo works, in part, because real robots are catching up with what we’ve been trained by Pixar movies to find adorable. Aibo’s 22 joints — including one bouncy tail and two perky ears — and OLED-screen eyes communicate joy, sorrow, boredom or the need for a nap.

When I talk to people about artificial intelligence, the most common pushback has to do with emotion and sociability. Sure, maybe robots will be better than us at driving cars or doing taxes, but they’ll never replace a conversation with friends or provide any kind of emotional support. A robot brain just can’t do this.

Of course not. But that’s the easy part to knock down. The real criticism of our alleged robot future is that humans are just too smart, too evolved, too well developed. There’s no way that a computer algorithm can even simulate human emotions, let alone truly feel them. But I am a cynic: not only do I think algorithms can do this, I think they can do it pretty easily. The truth is that we humans aren’t really all that smart. We’re basically overclocked apes with a few extra cognitive tricks tossed in, and those tricks aren’t especially sophisticated. Not only are we easily fooled, we practically beg to be fooled. It’s why we get conned so easily, it’s why racism is so widespread, and it’s why we trust a pretty face more than an ugly one. We’re suckers for crude heuristics that probably served some useful purpose on the savannah but often do more harm than good in 21st century society.

Anyway. My point is that we’re more easily fooled on emotional matters than other things. Geoffrey Fowler is an adult, and knows perfectly well that Aibo is just a hunk of silicon that’s programmed with a few tricks to seem sort of doglike. But he found Aibo adorable anyway. I’ll bet elderly folks who don’t get much company would too. So would I if they made a cat version.² And that’s despite the fact that even the 2.0 version of Aibo is obviously very, very limited. But give it another ten years and we’ll barely be able to tell Aibo apart from the real thing.

And another ten years after that we’ll have human robots who can worm their way into our hearts and con us out of our life’s savings. Our robot future is looking better all the time, isn’t it?

²What’s up with that, anyway? Are cats harder to simulate than dogs?