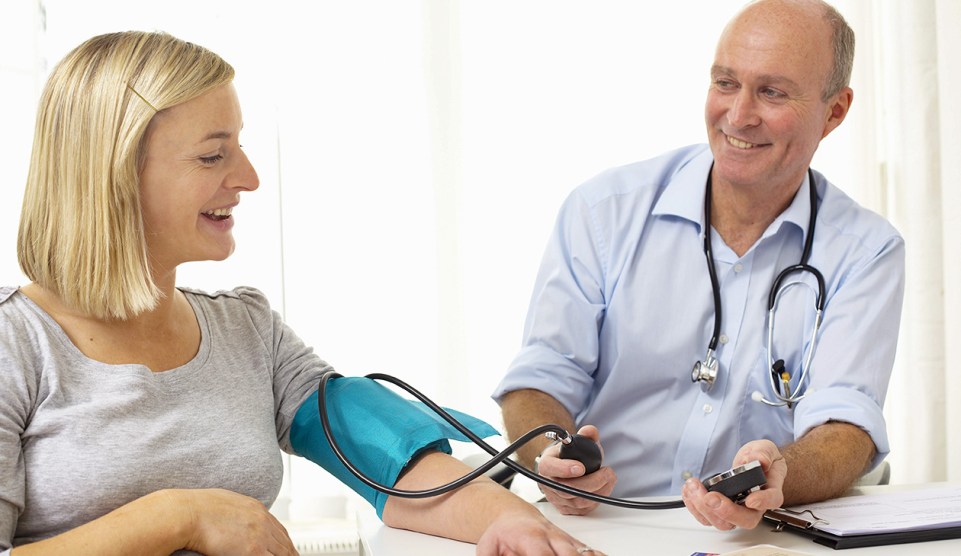 Sure, she looks happy now because her blood pressure is OK. But will she still be happy when this smiling man of medicine urges her to vote No on Proposition 8?Cultura/ZUMAPRESS

Like many doctors and nurses, I became politically active for the first time during the summer of 2017, when Congress tried to repeal the Affordable Care Act. I could see the direct risk to my patients — all of whom, inconveniently, had pre-existing conditions — and realized that protecting health care coverage was as critical as prescribing insulin.

….So is it time for doctors to pull out our prescription pads and, like Dr. Virchow, start prescribing democracy? This may seem like a radical extension of the medical mandate, but the poorer and the sicker our patients are, the more likely they are to be disenfranchised. Those with the most to lose are least likely to have their voices heard.

Of course no one should be advocating political viewpoints in the exam room — patients need a neutral, nonjudgmental atmosphere to feel secure. But civic engagement is nonpartisan. When patients say they can’t afford their medicine, fear being bankrupted by medical bills or struggle to find treatment for an addiction, we typically offer sympathy for these heartbreaking and seemingly intractable issues. But might it be our responsibility to point out that these problems are not just bad luck but also the result of political decisions? Instead of giving a kindly pat on the shoulder, perhaps we should inform our patients that they can call their elected officials to get answers. In addition to our medical counsel, perhaps we should also encourage them to vote.

They want to politicize everything! Now, in the name of promoting “health,” doctors are urged to engage their patients about politics…. Considering the repeated examples she gives of the political issues doctors should address with patients—and the apparent approach she believes they should promote—does anyone believe her disclaimer that “viewpoints” would not be advocated in the exam room? I don’t. And frankly, neither does she.

….No. I don’t want to be harangued by my doctor about politics during a physical. I don’t want my doctor asking me if I have guns or preaching to me about firearms policy (as some have urged they do). I don’t want to hear my doctor pontificating about the Affordable Care Act or what our public policy should be about the opioid epidemic–all of which would happen inevitably once politics entered the exam or treatment room.

I’m pretty sure this is a lifetime first for me, but I agree with Smith. There’s already pressure on doctors to discuss “dangerous” lifestyle choices that aren’t actually medical in nature, and haranguing patients to get out and vote is just one more step along this slippery slope. It’s a bad idea. But the reason it’s a bad idea is not because it annoys Kevin Drum or Wesley Smith. The reason is twofold:

Plus, I suppose that annoying Kevin Drum and Wesley Smith really is also a good reason to avoid this. I’m never all that thrilled to see a doctor, and if I knew I was going to have to put up with even more than just the usual crap about eating better and losing weight (thanks for the tip, doc!), I’d probably be even less likely to see my doctor. That could end up badly. Alternatively, I could make inquiries and choose my doctor on the basis of her political views, but I’m going to guess that this would end badly too.

Bottom line: think about how this plays out over the long term. It might seem like the right answer for an individual patient, but for the profession as a whole it isn’t.