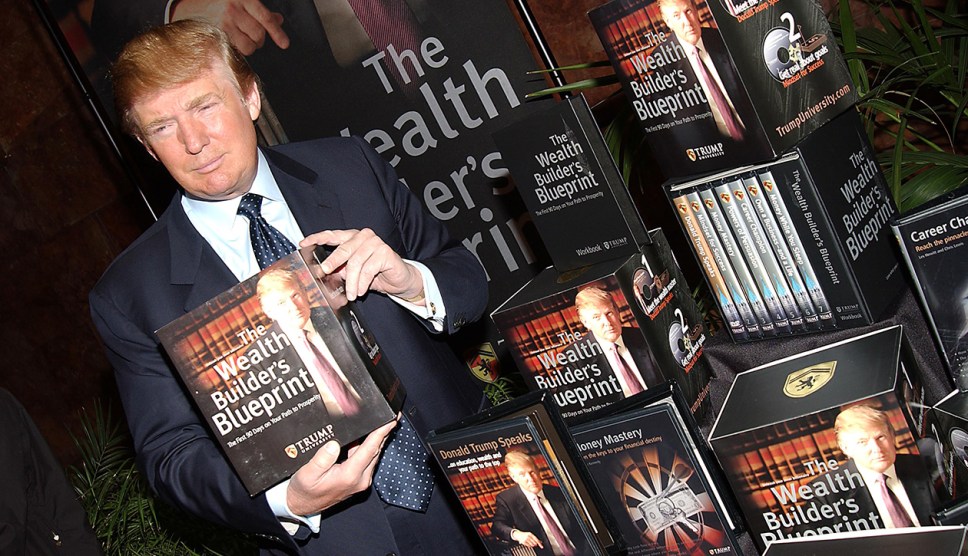 It's probably safe to say that these books and DVDs don't tell the real Trump story.Globe Photos/ZUMAPRESS

Here’s the headline at the top of the New York Times right now:

Trump Engaged in Suspect Tax Schemes as He Reaped Riches From His Father
The president has long sold himself as a self-made billionaire, but a Times investigation found that he received at least $413 million in today’s dollars from his father’s real estate empire, much of it through tax dodges in the 1990s.

I read this over lunch, then got my hair cut, bought some groceries, and came home. I expected it to be plastered over every blog, tweet and magazine I read. And yet, things are eerily quiet. It feels kind of weird.

Long story short, the Times tells us that both Donald and his father, Fred, were engaged in massive tax fraud for decades:

The findings are based on interviews with Fred Trump’s former employees and advisers and more than 100,000 pages of documents describing the inner workings and immense profitability of his empire. They include documents culled from public sources — mortgages and deeds, probate records, financial disclosure reports, regulatory records and civil court files.

The investigation also draws on tens of thousands of pages of confidential records — bank statements, financial audits, accounting ledgers, cash disbursement reports, invoices and canceled checks. Most notably, the documents include more than 200 tax returns from Fred Trump, his companies and various Trump partnerships and trusts. While the records do not include the president’s personal tax returns and reveal little about his recent business dealings at home and abroad, dozens of corporate, partnership and trust tax returns offer the first public accounting of the income he received for decades from various family enterprises.

The most common form of subterfuge in the Trump arsenal was valuation fraud. Basically, Fred would turn over some piece of property to Donald as a gift and value it at, say, $10 million. A year later Donald would sell it for $50 million. There were plenty of variations on this theme, and it turns out the IRS pretty much never audits this kind of thing. Over the years, the Trumps avoided hundreds of millions of dollars in taxes using this ruse.

Aside from the tax shenanigans, the article also makes it clear that Donald Trump is the farthest thing imaginable from a self-made billionaire. He regularly claims that the only money he ever got from his father was a $1 million loan, but that’s hogwash. We’ve all known it was hogwash for a long time, of course, but the Times puts some numbers to it:

By age 3, Mr. Trump was earning $200,000 a year in today’s dollars from his father’s empire. He was a millionaire by age 8. By the time he was 17, his father had given him part ownership of a 52-unit apartment building. Soon after Mr. Trump graduated from college, he was receiving the equivalent of $1 million a year from his father. The money increased with the years, to more than $5 million annually in his 40s and 50s.

….Fred Trump was relentless and creative in finding ways to channel this wealth to his children. He made Donald not just his salaried employee but also his property manager, landlord, banker and consultant. He gave him loan after loan, many never repaid. He provided money for his car, money for his employees, money to buy stocks, money for his first Manhattan offices and money to renovate those offices. He gave him three trust funds. He gave him shares in multiple partnerships. He gave him $10,000 Christmas checks. He gave him laundry revenue from his buildings.

….All told, The Times documented 295 streams of revenue that Fred Trump created over five decades to enrich his son….Here is what can be said with certainty: Had Mr. Trump done nothing but invest the money his father gave him in an index fund that tracks the Standard & Poor’s 500, he would be worth $1.96 billion today. As for that $1 million loan, Fred Trump actually lent him at least $60.7 million, or $140 million in today’s dollars, The Times found.

Add up all the rest of it and Donald hoovered up nearly half a billion dollars from his father—and then squandered nearly all of it. He lost everything in the 80s; was bailed out by dad; nearly lost everything again in the early aughts; was bailed out by selling off dad’s inherited empire; and then finally made some money on his own as a reality TV star. He is not quite the worst businessman ever to inherit a fortune, but he sure seems to be in the top 100 or so. Except for his TV show, Donald Trump has never really succeeded at anything in his life.

As ever, click the link to read the whole seedy story. It provides details about tax scam after tax scam and bailout after bailout. Donald Trump has a big mouth, but it turns out that’s just about the only thing big about him.