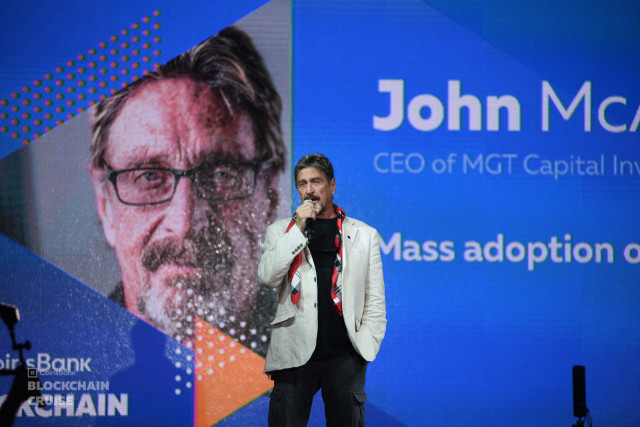 This is John McAfee, by far the biggest draw of the cruise. If you don't know who he is, just Google him. Do you expect me to do *all* your work for you?CoinsBank

It used to be libertarians. I’d mention something unflattering about Ron Paul and the result would be hundreds of angry, illiterate insults from true believers who were convinced that Ron Paul was just short of the second coming of Christ.

Now it’s crypto crackpots—unsurprisingly, I guess, since there’s a huge overlap in the crypto fan base and the Ron Paul fan base. After writing a couple of posts about Bitcoin over the weekend, my Twitter feed is bursting with—you guessed it: angry, illiterate insults from true believers who are convinced that Bitcoin is the only thing standing between us and monetary Armageddon. It would be amusing if it weren’t for the fact that so many of these people are obviously not well off themselves and are being taken for a ride by con men who care only about their bank accounts—and by that, I mean their real bank accounts, not their crypto wallets.

There’s not much I can do about that. As Jesus didn’t say, the con artists you will always have with you. But in the meantime I can recommend “Four Days Trapped at Sea With Crypto’s Nouveau Riche,” by Laurie Penny. It’s all about her invitation to spend time on a Mediterranean cruise dedicated to wining and dining crypto enthusiasts. The passenger list is about two-thirds crypto nerds and one-third “hostesses” from Ukraine, Russia, and Belarus:

On this half-empty passenger ship with its swirling ’80s carpets right out of The Shining, there is very little sober talk of blockchain’s obstacles or limitations. Nobody mentions how wildly ecologically unsound the whole project is—some estimates have bitcoin burning as much energy as the entire nation of Ireland for a relatively small pool of users. Instead, the core and only existential question is which of the various coins and ICOs (initial coin offerings) will make you the richest the fastest before dawn.

….On most ideological bandwagons, there is usually a distinction between grifters and true believers. The grifters are in it for the fame and the money and will say any old bollocks to get either. The true believers accept the money and fame as an inevitable proof of their genius. And then there is a rare subset of incredibly dangerous sociopaths soaked in Dark Enlightenment nightmare libertarianism for whom grifting is true belief. For many of them, including not a few on this boat, screwing over other people for your own gain is not just a side effect of economic philosophy, or proof of concept. It is a sacred calling. To them, the presence of thieves and Ponzi scheme dealers means the new free market is thriving.

Roger Ver is a true believer. “My ideal future,” he tells me, about 10 seconds after I turn on the recorder, “is that each individual has 100 percent complete control over their own money and they don’t have to get permission from any politician or banker or anybody at all to send or receive that money with whoever they want anywhere in the world. I’m trying to build the tools to enable that for everybody all over the planet.”

The crypto fad will eventually burn itself out as the marks lose their money and the grifter run out of new chumps to play. It feels to me like that day is near, but as Keynes didn’t say, “Con artists can keep the con going longer than you’d think.” Still, the Ron Paul bubble eventually burst, didn’t it? This one is bound to as well.