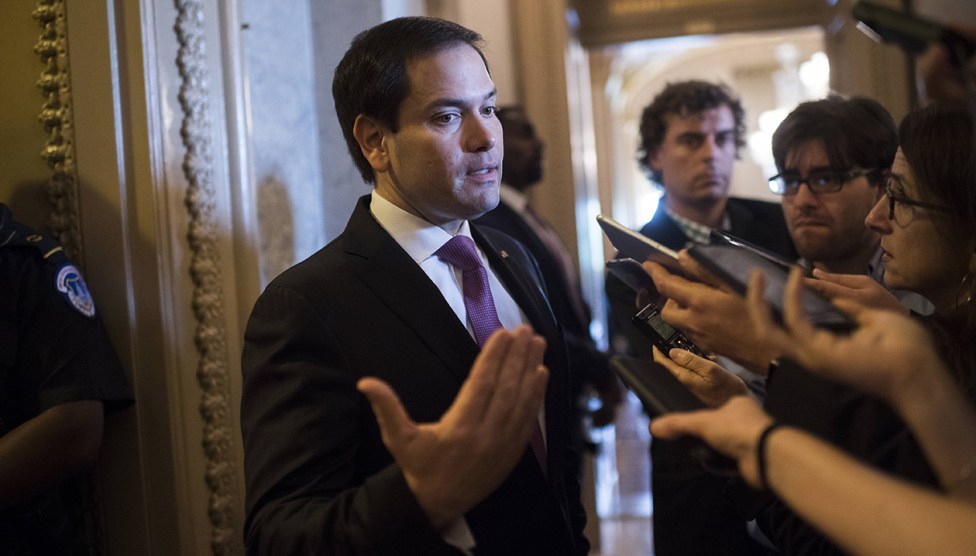 Marco Rubio wants to bring back the American Dream. Here are three excerpts from his essay in the Atlantic today:

More business tax cuts: I will soon introduce a plan to expand and make permanent the full-expensing provisions from last year’s tax-law effort and end the tax code’s favoritism for companies that spend their tax cuts on stock buybacks.

Unions: The backbone of labor law remains the National Labor Relations Act of 1935, and many of the law’s major provisions have remained unchanged since 1947. It enshrines a model of labor relations that pits worker against manager….Federal labor law should be reformed to make possible a more productive relationship between workers and employers.

Not bad for a Republican! I mean, sure, it’s a little galling to hear Rubio going on about stock buybacks when he voted just 12 months ago for a business tax cut that Republicans swore would produce massive investment and skyrocketing growth, but instead has mainly produced massive stock buybacks. But hey, we all make mistakes, amirite? Having learned their lesson, I’m sure a second Republican tax bill will focus like a laser on making things better for workers and definitely won’t sprout a million giveaways for industry by the time it’s done.

As for the “four-year-degree-industrial complex,” which insists on producing both left-wing students and left-wing science, perhaps a good dose of wood shop is just what they need. Of course, we already have a “for-profit-college-industrial-complex” that teaches stuff like aircraft mechanics and hair coloring. How about reforming that scam-infested industry instead of starting all over with welding classes at Harvard? Or maybe we should increase federal aid for community colleges, which also offer more vocationally oriented training? Obama gave this a try during his presidency, but I don’t recall much Republican support for either of those ideas. Maybe Rubio can change their minds.

And unions. Unions! But make no mistake: Rubio doesn’t want any of those old-school unions that make life hard for business owners. Instead:

This could take the form of new labor “co-ops” in the model of Germany’s sectoral workers’ groups, which negotiate wages and benefits, and provide training and apprenticeships for their workers. These voluntary, dues-paying organizations and their associated worker representatives could receive federal charters that would allow them to administer benefits such as unemployment insurance and worker-training programs. They would be banned from the kind of institutional political organization Big Labor has become bogged down in and would have the flexibility to negotiate beyond the extent of federal labor law in some areas.

Well now. I don’t know much about German worker co-ops, but I do know a little bit about German unions. For example, do you know why the German economy has been so competitive over the past couple of decades? It’s because worker compensation has grown very slowly. Why is that? It’s because in the 1990s—shortly after reunification with East Germany produced a torrent of low-paid workers who were willing and eager to move to the west for higher wages—businesses suddenly had greater leverage. Long story short, they used that leverage to force agreement from unions for a more “flexible” wage-setting process—and I don’t need to say much more about what “flexible” means, do I? So that’s the German model.