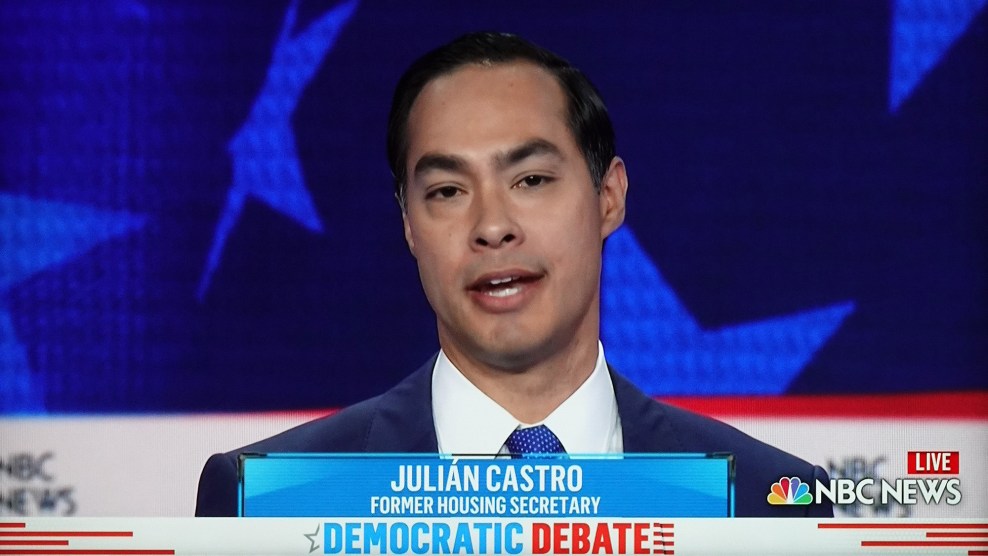 Julián Castro probably confused a lot of people with his call to “repeal Section 1325” at last night’s debate. This is something that’s been peculiar for a long time and is likely to divide Democrats.

The whole thing starts in 2005, when George Bush decided to start prosecuting undocumented immigrants in criminal courts. This was done under the authority of Section 1325 of the penal code, which had never been used before. It’s never been 100 percent clear to me why Bush did this, but the ostensible reason was that it would act as a deterrent to illegal border crossings. At first, there was a defensible case to be made for this:

The prosecutions began in 2005 and expanded over the next couple of years. And sure enough, illegal border crossings declined. When Barack Obama became president, he continued the prosecutions:

This is where things get dubious. Nobody seriously believes that Section 1325 prosecutions are responsible for this entire decline. It was mostly due to the Great Recession, which wrecked the US economy and eliminated a lot of the jobs that motivated migrant workers to cross the border. So the question now becomes: just how much of this decline is due to Section 1325 prosecutions? There’s no simple answer to that, but it’s a good guess that, in fact, the decline in 2006 is just noise and the decline in 2007 might be due partly to Section 1325 and partly to the shaky US economy. The rest is probably driven entirely by the economic collapse. In other words, it’s likely that the prosecutions actually had only a modest effect on the overall picture. Further evidence for this is the fact that prosecutions are monumentally backlogged:

The average wait for a case to be heard is now more than two years. It seems unlikely that this acts as a serious deterrent to illegal border crossings, but I suppose reasonable people can disagree about that. However, it also costs a lot of money and makes a joke out of our judicial system.

So Castro’s point is: why continue this? Why not ditch the Bush/Obama prosecutions and just return to the previous system, which was less formal but probably just as effective? Technically, this doesn’t actually require the repeal of Section 1325, merely a return to its historical non-enforcement, but repealing it would obviously be a more permanent change.

Border prosecutions have now been going on so long that everyone accepts them as a fact of life. This is why you hear endless calls for more judges and more resources to reduce the insane backlog of cases. That’s one answer. Another is to simply stop the prosecutions and end the backlog instantly. That’s Castro’s proposal, but not all Democrats are ready to accept it.