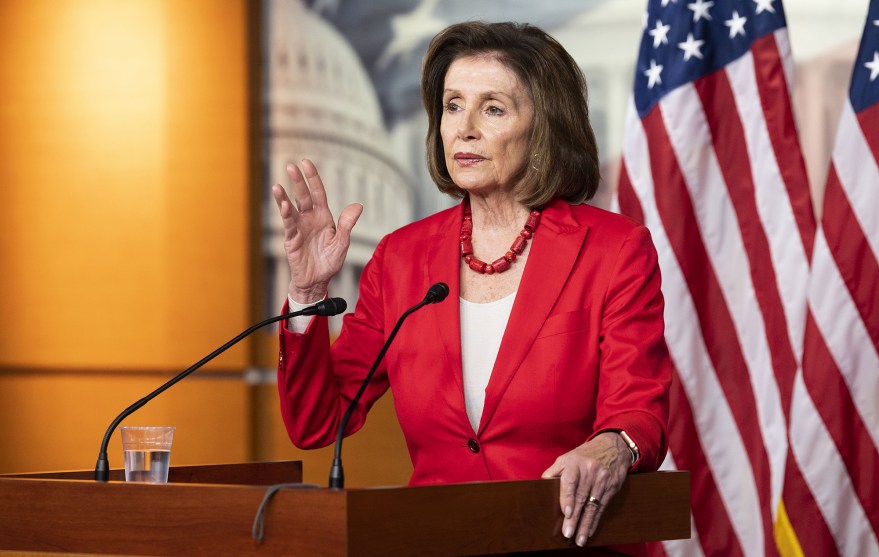 It’s summer and the news is slow. This means that Nancy Pelosi’s dismissive attitude toward “The Squad” of progressives led by Alexandria Ocasio-Cortez continues to fill the news pages. Just to refresh your memory, here’s the full excerpt from Maureen Dowd’s recent profile of Pelosi that started the whole thing:

I asked Pelosi whether, after being the subject of so many you-go-girl memes for literally clapping back at Trump, it was jarring to get a bad headline like the one in HuffPost that day — “What The Hell Is Nancy Pelosi Doing?” The article described the outrage of the Squad, as Alexandria Ocasio-Cortez of New York, Ilhan Omar of Minnesota, Rashida Tlaib of Michigan and Ayanna Pressley of Massachusetts are known.

Pelosi feels that the four made themselves irrelevant to the process by voting against “our bill,” as she put it, which she felt was the strongest one she could get. “All these people have their public whatever and their Twitter world,” she said. “But they didn’t have any following. They’re four people and that’s how many votes they got.”

This is all about the $4.5 billion bill funding additional aid to address the emergency at the border. And to refresh your memory yet again, the bill Pelosi is talking about is not the one that eventually passed after the Senate revolted and forced her hand. It was the original House bill, which included quite a few restrictions on how the money could be spent. That bill received unanimous opposition from Republicans and from the four members of The Squad. Every other Democrat voted for it.

So what’s going on? In one sense, Pelosi is just playing her traditional role as a working politician: you’re successful if you can round up the votes to get things done. The squad members may get a lot of press, but they couldn’t even persuade their fellow progressives to hold out for a better bill, let alone any of the centrists. That really is kind of a pitiful performance, and Pelosi is rightfully pointing out that she’s the one who put in the shoe leather work to get support for a stronger bill than the ones Republicans were proposing.

Of course, AOC and her colleagues don’t care about that. They’re playing an entirely different game, and they know perfectly well they don’t have the votes to actually pass anything. Their goal is to move public opinion, and the way you do that is by holding out from the majority in the most conspicuous possible way. If it works, AOC will someday be Speaker of the House and her Democratic Socialist politics will have broad support throughout the country. If it doesn’t work, she’ll serve a few terms, write a book, and then disappear.

In this sense, then, I don’t really take Pelosi’s comments very seriously. Why is she dissing AOC? Because that’s her role as leader of the party, that’s why. Among other things, she needs to protect all the people who did vote for her bill even if they had qualms about it. She’s taking the heat so they don’t have to.

But in another sense, it’s also because she knows what she’s doing. It’s interesting to watch the dynamics swirling around Pelosi. There can hardly be any question that she’s pretty progressive. She is, for example, considerably farther to the left than Paul Ryan was to the right. (According to VoteView, she ranked #32 out of 200 Democrats in the previous session of Congress.) And most progressives respect the hell out of her. She has a well-deserved reputation as the smartest, most effective Democratic politician of her era.

But I’ve always thought that if you respect someone, it means you respect them even when you disagree with them. So you can still disagree with Pelosi, but you should acknowledge that she most likely has pretty good reasons for not pursuing impeachment; going slow on investigations; not pushing for an even more liberal border bill,¹ and being publicly dismissive of AOC. I don’t know that I agree with all of these decisions, but I don’t suddenly think Pelosi is a dimwitted sellout because of that. I think we just disagree. And given her massively greater knowledge of Congress, I suspect she’s more right about this stuff than I am.

¹She was pretty obviously right about the border bill, for example. Even the version she supported turned out to be too liberal for Senate Democrats to stomach. As a result, we ended up with the Republican bill.