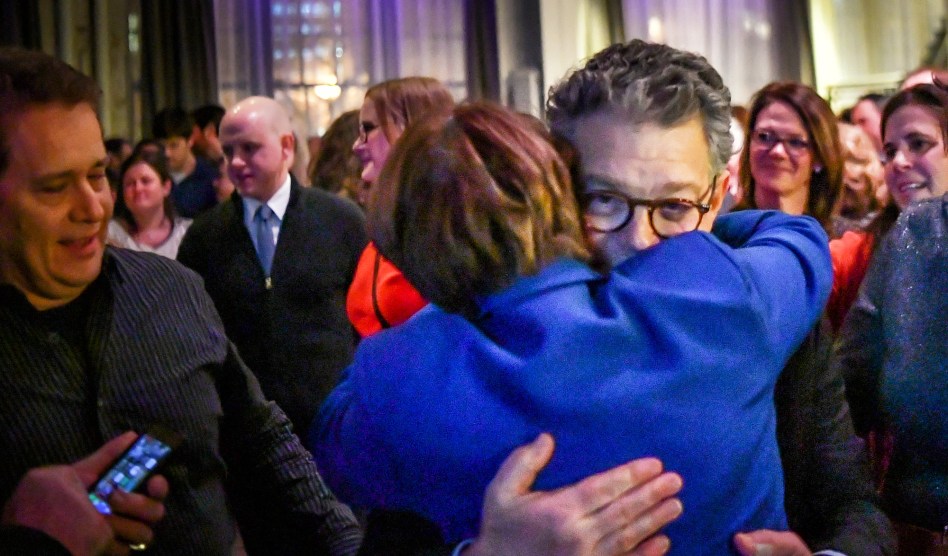 Al Franken hugs Sen. Amy Klobuchar at the end of a speech shortly before he stepped down from the Senate.Glen Stubbe/TNS via ZUMA

Today’s big story is a Jane Mayer piece in the New Yorker taking a retrospective look at the Al Franken affair. Not to put too fine a point on it, Mayer basically concludes that Franken got railroaded:

A remarkable number of Franken’s Senate colleagues have regrets about their own roles in his fall. Seven current and former U.S. senators who demanded Franken’s resignation in 2017 told me that they’d been wrong to do so….Patrick Leahy….Heidi Heitkamp….Tammy Duckworth….Angus King….Jeff Merkley….Bill Nelson….Tom Udall.

….His undoing began with a photograph, which was released by a conservative talk-radio station on November 16, 2017….The photograph captures him on a military plane, mugging for the camera as he performs a lecherous pantomime. He’s leering at the lens with his hands outstretched toward the breasts of his U.S.O. co-star, Tweeden, who is wearing a military helmet, fatigues, and a bulletproof vest. Franken’s hands appear to be practically touching her chest, and Tweeden looks to be asleep—and therefore not consenting to the joke.

There’s too much in Mayer’s piece to excerpt just a few bits, but it’s obvious that she believes Franken’s version of what happened on that infamous 2006 USO tour with Leeann Tweeden. She amasses both facts and recollections from other people on the tour, and by the time she’s done there’s little left of Tweeden’s account except for the bare fact of the photograph that launched the whole thing—and even that turns out to be less damning than Tweeden makes out.

I don’t suppose there’s any point in relitigating this now, but Franken continues to hold a grudge against the senators who called for him to resign before he had a chance to defend himself. “I’m angry at my colleagues who did this,” he tells Mayer. “I think they were just trying to get past one bad news cycle.”

Charges of sexual harassment typically roll out in a drearily scripted way, and one of the inevitable moments is the scene where a bunch of people acknowledge that “everyone knew” about it all along. But this scene was not just missing from the Franken affair, it was specifically repudiated by virtually everyone who knows him. Literally nobody thought that Franken was in any way a sexual predator or anything even close. This is why I’ve never been comfortable with the whole thing. The accusations never quite added up, and not a single one of Franken’s friends produced an “everyone knew” moment. I suspect that the only thing everyone knows at this point is that Franken was treated badly and then tossed aside. It was not a shining moment for either the Democratic caucus or the #MeToo movement.