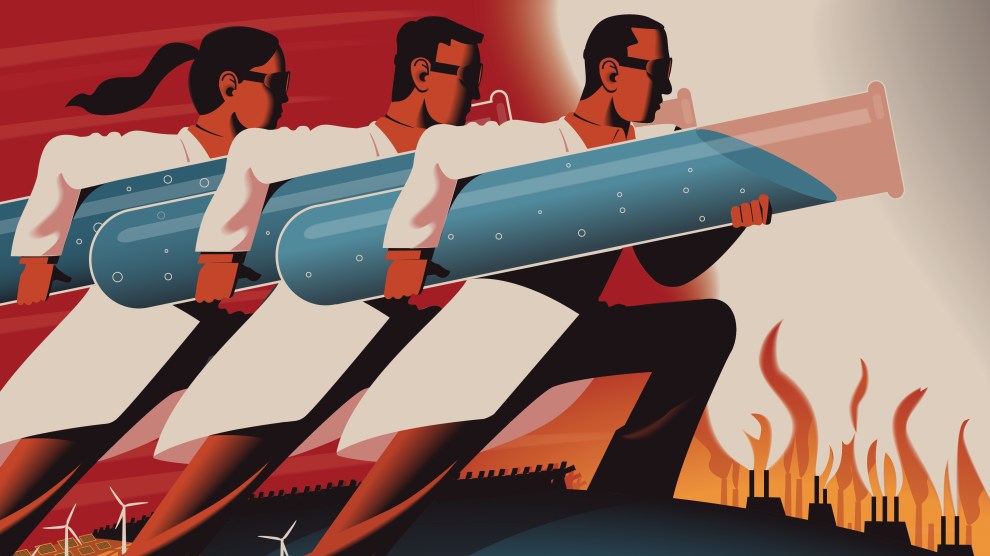 Yesterday we posted my magazine piece making the case that we should focus strongly on massive climate R&D, even if that means spending less money on building out green infrastructure with existing technology (primarily wind and solar). Surprisingly, I didn’t persuade everyone instantly that I’m right! So it’s probably worthwhile responding briefly to some of the most common criticisms.

Note that this list is not exhaustive, and I reserve the right to revise and extend any of my answers at a later time.

We don’t need new tech. We can reach our climate goals by massive deployment of tech we already have.

Putting aside the political likelihood of this happening, it just isn’t true. A huge national commitment to wind and solar would probably reduce US carbon emissions from fossil fuels by 80 percent or so over the next three decades. But (a) that still leaves 20 percent, (b) this accounts only for carbon emissions from transportation and electricity generation, and (c) it does nothing about carbon emissions from China and the rest of the world. Existing tech is just flatly not enough to get the world to zero emissions by 2050, let alone get us there and begin elimination of the carbon already in the atmosphere, which is our real goal.

Why are you blaming China for its climate emissions? The United States is the real culprit.

I’m not blaming anyone. It’s just a fact that the US accounts for only 16 percent of global carbon emissions. China accounts for much more and its carbon emissions are rising. The same is true for other non-Western countries as they try to catch up to Western lifestyles. As a simple matter of facing reality, this means that any serious climate plan has to focus not just on the US, but on how we can get non-developed countries to reverse their climate emissions. Setting a good example might be a nice idea, but it won’t do the job: we need to provide them with ways to continue improving their standards of living without emitting ever more carbon. That almost certainly means providing them with technology that they’ll adopt not because they’re good global citizens, but because it’s cheaper and better.

You can’t just blindly toss money at R&D. It takes careful planning and management, and then it has to be demonstrated and deployed.

Yes, of course. I was writing a piece for popular consumption, and that necessarily means that it will come out sounding something like “Let’s shovel a ton of money at the scientists!” But this is only because the details of how we produce large-scale innovation are uninteresting to a lay audience and would make a long article even longer. Needless to say, when I argue that we should spend a lot of money on R&D, I mean that we should spend money on primary research, demonstration projects, engineering, deployment, and proper management for the whole enterprise.

Focusing on R&D is just an excuse to do nothing in the present.

For some conservatives, this is true. But we can’t let bad faith arguments from a few people stop us from doing the right thing.

R&D is a chancy thing. We can’t afford to sit on our hands while we all hope that some shiny object will save us in the future.

Yes, there’s some risk here. But the very risk of R&D is the reason we need to focus on it right now. Even in the best case, R&D that we start today is unlikely to pay off in less than a decade or two, and then there’s another decade or two to roll it out on a massive scale. In other words, we’re already out of time. If we don’t begin a huge effort immediately there’s zero chance of reaching our climate goals by 2050. In the meantime, of course we should continue our present efforts and then some. We just shouldn’t focus federal spending on it at the expense of more spending on R&D.

Real-world deployment is the way we reduce the cost of tech so that it’s available to everyone. That should be Job 1.

This is true, and if I thought that merely deploying existing tech could get us to our goals, I’d be all in favor of it. But again, the evidence suggests this isn’t true. We need more.

We still need massive deployment of wind and solar!

I agree. But we can largely do this without a lot of federal government help if we have to. Tax subsidies are nice, but not absolutely necessary. In a pinch, simply mandating a phased conversion to renewable power and electrification would work fine. But there’s really no way to get massive spending on R&D except via simple federal government funding.