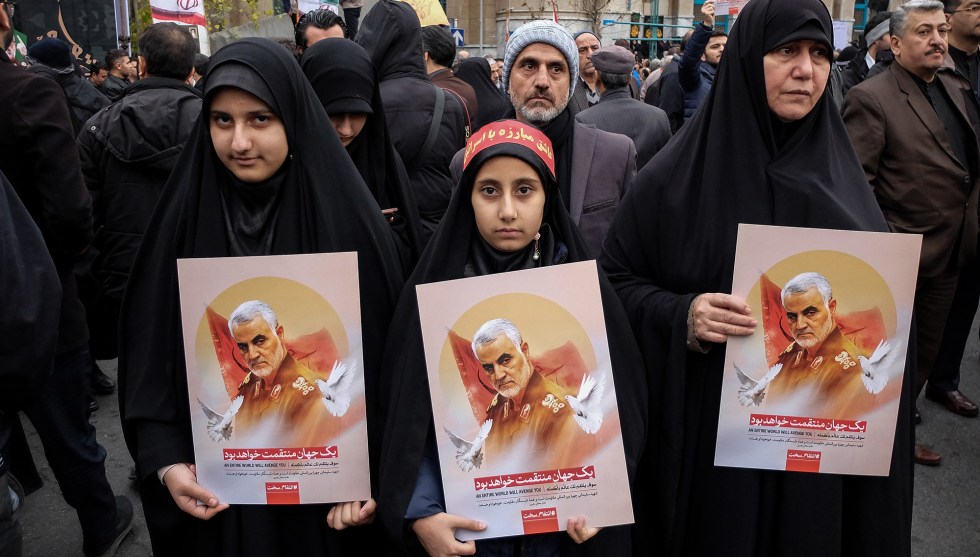 Iranians take part in an anti-US rally to protest the killing of Iranian military commander Qassim Soleimani following a US airstrike at Baghdad's international airport.Rouzbeh Fouladi/ZUMA

I had all night to while away my time, and I spent part of it by reading what everyone is saying about our drone attack on Qassim Soleimani, leader of Iran’s Quds Force. There was an awful lot of chatter about whether it was an act of war; whether to call it an “assassination”; and whether it was legal. I find all of this spectacularly uninteresting. For all intents and purposes, we’ve been at war with Iran for many years—at least since we invaded Iraq in 2003, in any case—so to the extent that “act of war” refers to something that might start a war, it doesn’t even apply.

On the “assassination” question, does killing a military officer during a war count as assassination? I suppose I’d say no, but call it what you will. As for legality, that’s just a mirage. What President Trump did is little different from what other presidents of both parties have done, and all of those things have been deemed technically legal by the appropriate administration lawyers. Beyond that, presidential actions in theaters of war are illegal only if, in the end, Congress enforces its will or the Supreme Court rules the action illegal. Until then, it’s legal in every practical sense.

But this is all semantics anyway. Why waste our time? The real question is whether it made sense to kill Soleimani and what will happen next. The Trumpies claim that Soleimani was just about to launch a huge attack on Americans, so killing him saved lots of innocent lives. This seems unlikely for two reasons. First, it’s not as if the Quds Force will suddenly collapse with Soleimani’s death. His deputy has already taken his place,¹ and if there really is a big plan in the works then he can pick up the phone and order it to go forward quite easily. Second, the Trumpies lie about everything, so your first guess should be that this is a lie too.

But is Trump lying? Here is Reuters:

Inside the plot by Iran’s Soleimani to attack U.S. forces in Iraq https://t.co/X3IVUCSLjv pic.twitter.com/DJDUb9jh6T

1. I’ve had a chance to check in with sources, including two US officials who had intelligence briefings after the strike on Suleimani. Here is what I’ve learned. According to them, the evidence suggesting there was to be an imminent attack on American targets is “razor thin”.

So which is it? Razor thin evidence or a clear order to step up attacks on Americans? Hard to say right now. In other news, perhaps you’re wondering whether our attack will lead to a genuine hot war with Iran. Have no fear:

Gen. Milley, Defense Secretary Mark Esper and Mr. Pompeo discussed the strike with Mr. Trump, who was winding up a two-week holiday at his Florida resort, Mar-a-Lago. Senior officials concluded that “there was a reasonable chance” the strike wouldn’t spark a war and would instead empower moderates in Iran, a White House official said.

A “reasonable chance” of no war! Here’s how the LA Times’ source described the same conversation:

One briefing slide shown to Trump listed several follow-up steps the U.S. could take, among them targeting Suleimani….Unexpectedly, Trump chose that option, the official said, adding that the president’s decision was spurred on in part by Iran hawks among his advisors….“There was consensus in the president’s national security cabinet that the risk of doing nothing was unacceptable given the intelligence and given the effectiveness that Suleimani presents,” the official said.

The “risk of doing nothing” was just too high. Is that better or worse than a “reasonable chance” of not sparking a war? This is left as an exercise for the reader.

All things considered, taking out Soleimani strikes me as probably a dumb thing to do. I have several reasons for thinking this:

I’m no international relations expert, so agree or disagree with all this as you wish. But if there’s one thing I’d like more people to understand, it’s this: we’re already at war with Iran. We’ve been at war with Iran for a long time, and ever since Trump started his “maximum pressure” campaign we’ve really been at war. Trump’s effort to ruin Iran’s economy and bring them to their knees might not get your attention very often because America does this kind of thing a lot, but I guarantee you that it looks like war to the Iranian leadership.

¹Brigadier General Esmail Ghaani. You might as well memorize that name since you’re likely to hear a lot more of it.