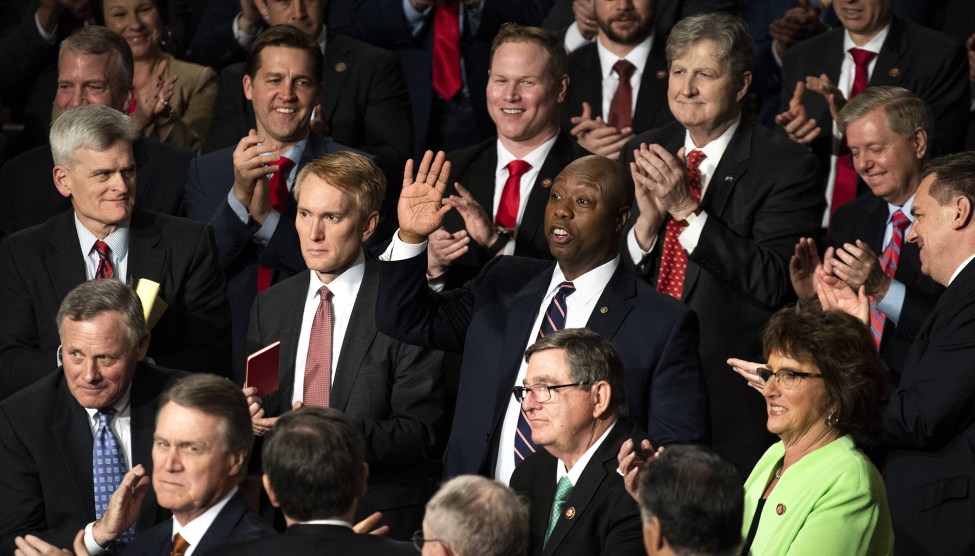 The Republican cheering section at last night's State of the Union address.Caroline Brehman/Congressional Quarterly via ZUMA

When it comes to racial diversity, you’d almost have thought last night’s big speech was being delivered by a Democrat:

As President Trump delivered his State of the Union address on Tuesday, he highlighted several people of color for promotions and giveaways and referred to policies popular with minority voters. It was an aggressive continuation of a strategy that he and his advisers believe should be a central part of his re-election effort: courting African-Americans, even if the odds look stacked against him and polls show that most black voters believe he is making the country’s racial issues worse.

….Mr. Trump’s overtures to black voters were not subtle. His gestures earned him accolades from his administration members and Republican supporters gathered in the House chamber, but others criticized Mr. Trump’s checklist-style approach as pandering.

So who was this aimed at? Obviously, it was aimed at least partly at African Americans themselves. As many people have already pointed out, Trump doesn’t need to become their favoritest president ever. He just needs to woo a few percentage points of the black community away from the Democratic candidate, and that might be enough to tip a close race in his favor.

Who else? A number of people think Trump’s speech was aimed at suburban centrists who are uneasy with his usual harsh rhetoric. The idea here is for Trump to look more moderate and inclusive toward blacks while continuing to bang the drum about immigrants who have murdered white folks. The message is that Trump is no racist, but he’ll keep you safe from all the brown people.

But that’s not all. Something that I think people miss is that this kind of inclusive racial rhetoric is also aimed directly at Trump’s base. Remember this?

Anybody with a liberal sensibility cringed at this, but the message to Trump’s base was clear: See, I’m trying to reach out to Hispanics. But no matter what I do they call it racist.
The inclusive SOTU rhetoric works the same way: Trump is telling his base that he’s no racist and, by inference, that they aren’t racist either. Liberals just call everyone racist who disagrees with them. It’s a very comforting message.