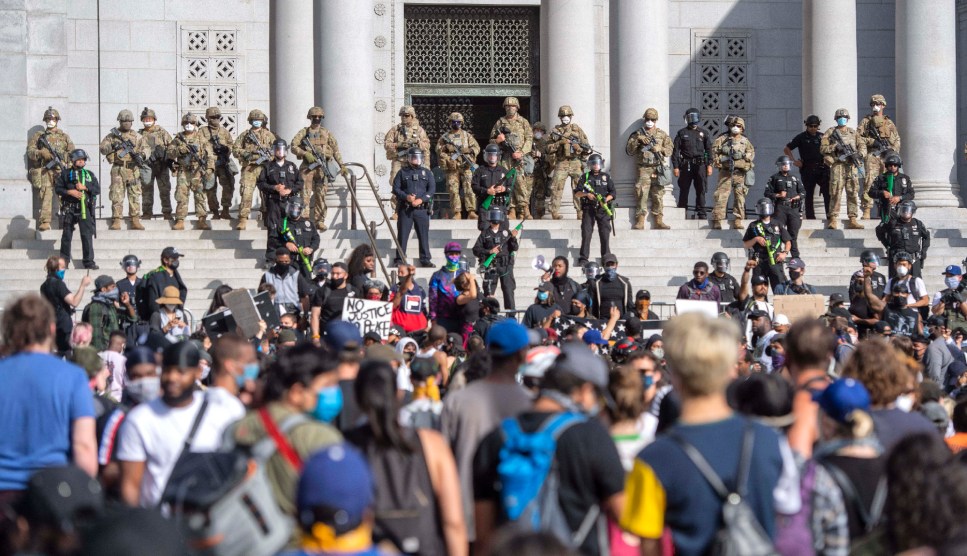 I don’t know what the George Floyd protests looked like in the rest of the country,¹ but in Los Angeles they were damn strange. The LA Times captures it:

Two groups emerged more distinctly later in the day: one ransacking shops, the other rallying on message. In Santa Monica, they were often blocks apart. Looters in the shopping district on 4th Street appeared organized, smashing windows with crowbars and skateboards and loading the stolen goods into waiting cars. Some ran or drove off as sirens approached, but mostly continued as they passed. Dozens stole shoes and gear from a Vans shop, while bike after bike was pulled out a hole in the front door of an REI store. Fires were lit, with at least two squad cars burned.

Several blocks away, police tried to break up demonstrators on Ocean Avenue with smoke grenades, and fired rubber bullets when eggs and water bottles were hurled at them. By early evening, a similar dynamic developed in downtown Long Beach, with police facing off with protesters as groups of people looted stores nearby.

This was obvious the entire day and into the evening. The people looting were completely unrelated to the protesters, who were generally peaceful. But there were hundreds of police officers facing off against hundreds of protesters, seemingly just waiting for a water bottle to be thrown so they could retaliate in force. Meanwhile, a few blocks away, TV helicopters showed people destroying storefronts in precision formation with not a cop in sight. Since local law enforcement also has helicopters, I assume they knew perfectly well what was going on. They just didn’t feel like doing anything about it.

The LAPD, of course, says they are understaffed, and that might be so. But it sure didn’t look like the main mass of protesters needed 100 percent of their attention. Even a modest police presence dictated by helicopters and social media surveillance might have reduced the looting while doing no harm to their ability to control the peaceful protesters.

That’s what it looked like, anyway. The reality on the ground may be different, so I’ll wait before coming to any final judgment.

¹That is to say, I know bits and pieces from newspaper and social media coverage. But I wasn’t watching events unfold all day, as I was in Los Angeles.