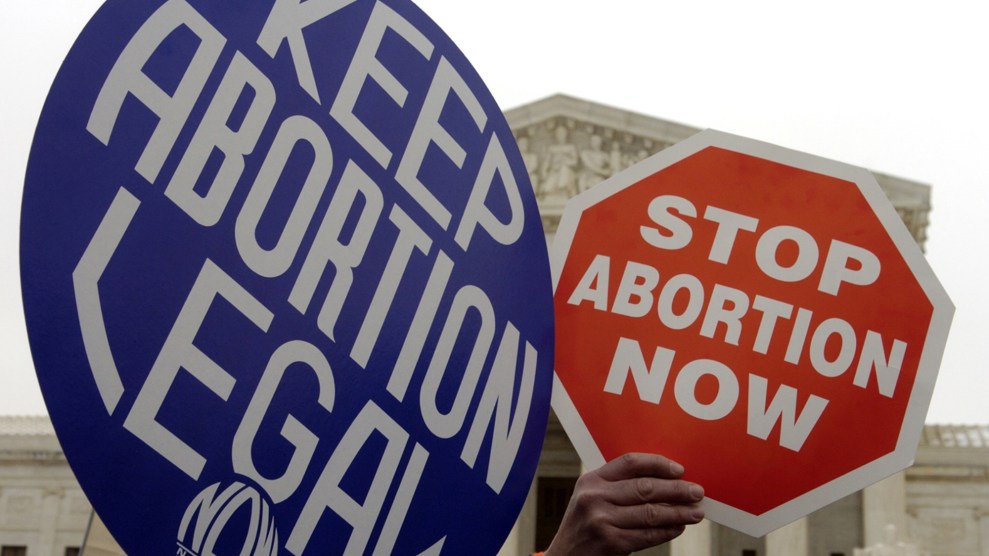 Anti-abortion marchers and abortion-rights supporters at the U.S. Supreme Court on the anniversary of Roe v. Wade in January 2005.Pete Souza/TNS via ZUMA Wire

Over at New York, Eric Levitz makes a familiar case: the Republican Party is crazy and the system is rigged in their favor:

Every elected branch of the U.S. government structurally overrepresents low-density areas. And since America’s two parties are now polarized along urban-rural lines, the GOP has ballots to burn.

….Biden has no plausible answer to the problem that the conservative movement poses. But it’s not clear that anyone else does either. Some segments of the left preach economic populism as a panacea for polarization: Provide working-class voters with a robust, social-democratic alternative to cultural conservatism, and the Democratic Party just might regain its New Deal–era dominance. I favor this strategy on its substantive merits. And it may well be the best hope our Republic’s got. But there is little empirical evidence to support a “just world” theory of American politics in which Democrats are reliably rewarded for taking on plutocratic power or reliably punished for appeasing it.

This is all true. But here’s what I don’t get: this has all been obviously true ever since the Moral Majority powered Ronald Reagan to victory in 1980. Over the following 40 years liberals griped incessantly about the electoral advantage that conservatives enjoy and wondered aloud what the problem is with Kansas. Why, oh why, do conservative voters keep supporting the GOP even though it’s the party of Social Security “reform” and tax cuts for millionaires?

The answer is equally obvious: these voters don’t really care much about economic policy and we can’t make them. They care about social issues. Translated into non-apocalyptic language, here’s what the world looks like from their point of view:

The thing is, all of this is more or less true. We liberals do want to separate church and state; we do support gay rights; we do support abortion rights; etc. And this strikes a lot of rural conservatives as basically depraved. Conservative politicians and conservative media turn all this stuff into a caricature, but it’s not as if it isn’t grounded in reality.

So this leaves liberals with two alternatives. First, we can figure out a way to retain our views on social issues but convince conservative voters that they aren’t a big deal and don’t represent the fall of Western civilization. Second, we can tone down our social views to make them more acceptable to moderate conservatives. Those are our two choices, but among the activist wing of the left we’re not really willing to pursue either one of them. We mostly ignore or mock the rural conservatives, and we certainly refuse to soften our views on social issues for them. They’re just bigots, right? Then we wonder why they vote for Republicans.

All of this used to be fairly obvious to anyone interested in politics, but it gets surprisingly little attention these days because we spend so much time acting goggle-eyed at the lunatics. But the lunatics have always been around: the John Birch Society, the Moral Majority, the Mena airport clowns, the tea party, and today QAnon and assorted other crackpots. So forget them for the moment. The real question is: How can liberals appeal to folks who are just normal conservatives?

One way or another, the answer is that we have to make our views on social issues acceptable to them. Everything else is just so much fluff. So how do we do it?