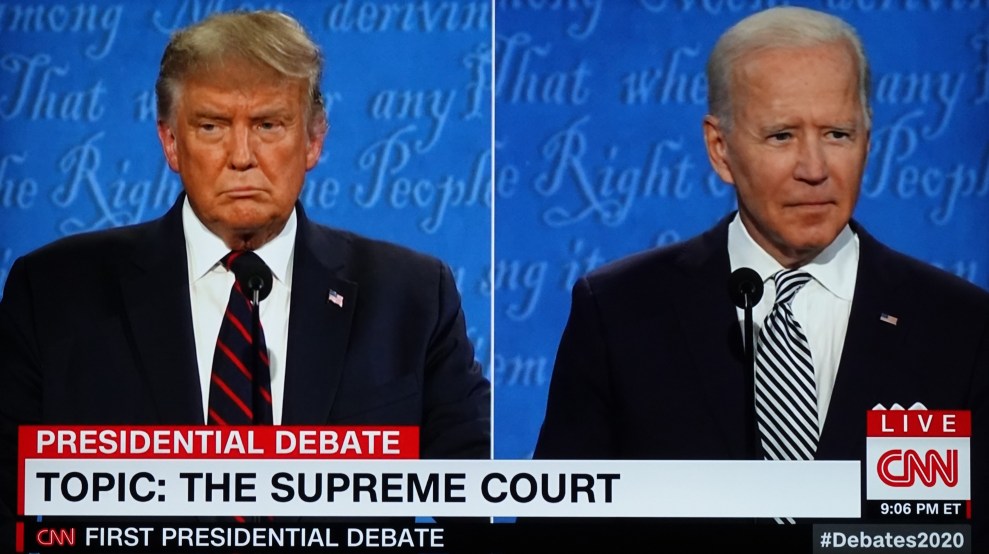 Well. That was quite a show, wasn’t it? I’ve never seen a debate moderator tell a sitting president to shut up even once, let alone over and over. But Chris Wallace did.

Thanks to Donald Trump’s inability to keep his mind on a single subject for more than a few seconds, there was no real arc to this debate. It sort of swerved and veered from one spot to another based on whatever lies and conspiracy theories popped into Trump’s mind at any given moment. But fact checking, as Biden said, is pointless. I suppose a few brave souls will do one, but it almost misses the point. Of course Trump was lying constantly. That’s just part of his persona and everyone knows it. The question is more about the literary quality of his lies, and tonight I’d judge the literary quality pretty low. Trump was obviously trying to deliver a toned-down version of his rally speeches, but that doesn’t work well in a more serious debate format. Being nothing more than an insult machine turns people off on a stage like this.

And what about Trump’s unwillingness to condemn white supremacist groups? And his unwillingness to urge his followers to stay calm after the election? If those get the 24/7 cable news treatment, it could—and should!—do Trump some serious harm.

Biden was OK. He did his best to deal with Trump’s blizzard of lies without being consumed by them, and that’s a tough thing to do. It’s hard to say if Biden managed to get his points across in the face of Trump’s constant interruptions and bizarre attacks, but I think he did. He also successfully managed to present himself as something more than just an insult machine, which should appeal to moderates. He came across as a decent person, which Trump certainly didn’t do.

Trump’s fans will probably be happy with his performance. He hit all the weird right-wing obsessions that they love so much. But Biden fans will also be happy. He did fine and didn’t stumble or backtrack too much. I think Biden might have won a few votes tonight, but overall, as usual, my guess is that this debate changed very few minds.

It’s time for the big debate. Let’s get to it.

10:36 – Trump is all but guaranteeing that if he loses he will take to the streets claiming the election was a fraud.

10:23 – Trump is going hard on the Green New Deal, claiming it will destroy the economy.

10:17 – Trump just can’t help himself. He simply has to get every single insult out.

9:45 – Trump is just a whirlwind of stream of consciousness attacks and insults.

9:31 – Trump is now insisting that Biden is stupid. Literally. “Don’t ever use the word smart with me.”

9:09 – First question is about Amy Coney Barrett. Biden doesn’t say a word about abortion. He focuses solely on Obamacare.

8:55 – Trump has spent the past week claiming that Joe Biden is a doddering old man who’s an embarrassment to the nation, and today the entire right-wing noise machine has kicked into high gear to back him up. This may seem dumb, but it probably isn’t. What they’re doing is priming us. They want everyone to be hyper-attentive to Biden’s performance, ready to criticize him every time he halts or corrects himself or stumbles over something. Even those of us who think we’re immune really aren’t. My advice: if you look at past debates, you’ll see that everyone stumbles a bit here and there. We just don’t notice it. So calm down and ignore the presentation on both sides unless something really grisly happens.