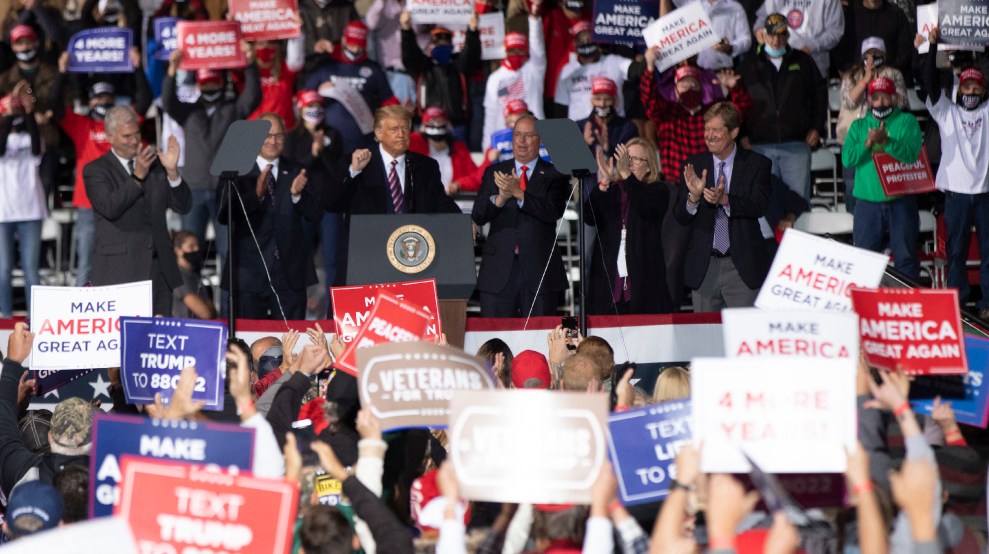 At a rally in Minnesota last weekend, Trump mocked Rep. Ilhan Omar and told the white crowd they had "good genes."Chris Juhn/ZUMA

Politico reports that although Donald Trump has gained ground slightly with Black and Latino voters this year, his support among white voters is cratering:

In Minnesota, where the contest between Trump and Joe Biden had seemed to tighten in recent weeks — and where both candidates stumped on Friday — a CBS News/YouGov survey last week had Trump running 2 percentage points behind Biden with white voters, after carrying them by 7 points in 2016….It’s the same story in Wisconsin, where Trump won noncollege-educated white women by 16 percentage points four years ago but is now losing them by 9 percentage points, according to an ABC News/Washington Post poll. In Pennsylvania, Biden has now pulled even with Trump among white voters, according to an NBC News/Marist Poll.

….The erosion of Trump’s white support — and its significance to the November outcome — was never more obvious than in Trump’s messaging in recent days….But Trump’s rhetoric does not appear to be resonating with white America to the degree it did in 2016. That year, whites cast nearly three-quarters of the vote nationally, and Trump won those voters by about 15 percentage points, according to Pew Research. Four years later, Biden has torn into that advantage, though to what degree is uncertain. The latest Morning Consult poll showed Trump now beating Biden among white likely voters nationally by just 5 percentage points. An NBC News/Wall Street Journal poll on Sunday put Trump up among white voters by 9 percentage points, while a PBS NewsHour/NPR/Marist poll on Friday showed Biden and Trump essentially tied with white voters.

This is Trump’s fundamental problem. In 2016 he squeezed a bit more support out of the white-non-college vote than Hillary Clinton got from the white-college vote, and along with a few other factors that was enough to eke out a victory. Trump accomplished this with a campaign that was more openly racist than any Republican had dared to run in recent memory, so now he’s trying the same strategy again.

But there’s only so much water you can squeeze from a rock. Over the past few weeks Trump’s appeals to the white vote have become more and more demagogic, but it’s not doing him any good. It might get him a few more votes from white bigots, but that demographic is already fully behind him. Like a campaign rally in Tulsa, the Trump Train has little hope of filling more seats for his Whites First cause. And in any case, for every vote he wins among that group, he probably loses two or three from white voters who aren’t bigots and are increasingly disgusted with him.

If Trump keeps this up, it’s doubtful that he has a road to victory. And he probably will keep it up, since he seems to know no other playbook. In a weird sort of way, that’s kind of a relief.