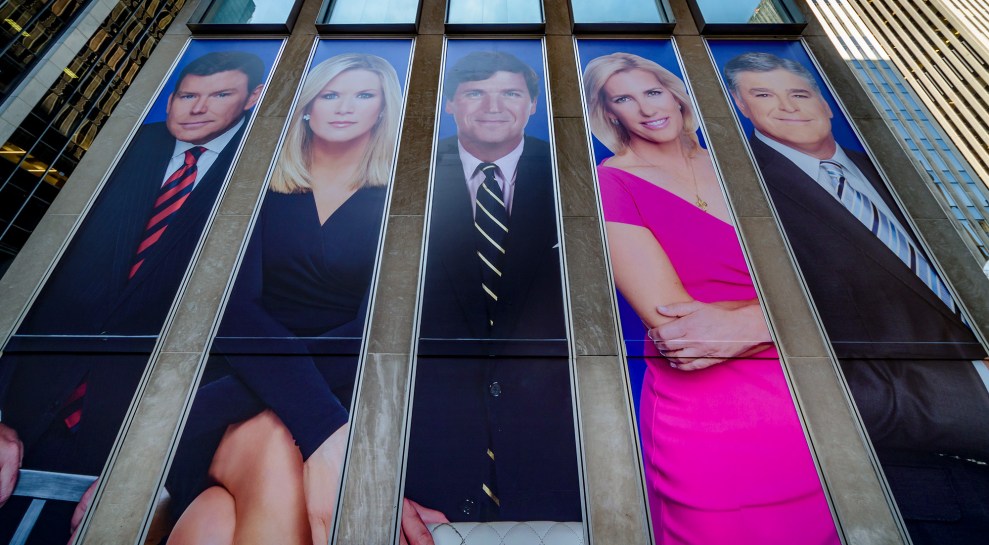 See? All just peas in a pod.Erik Mcgregor/Pacific Press via ZUMA

I get questions. For example, one reader emails to ask my why I have such a special animus towards Fox News. Isn’t social media the big problem right now? And aren’t all the right-wing radio shows just as bad?

Sure. But let’s take the radio contingent first. In many cases they’re worse than Fox. But here’s the difference: even the most devoted fans who listen to them understand that Rush and Hugh and Mark and all the other AM talkers are engaged in opinion-mongering. It’s extreme opinion-mongering, but still, at its core it’s bar room hot air.

Fox News is different. You and I and all the Beltway sophisticates understand that “prime time Fox” is also bar room hot air. But you’d be surprised at just how differently the average Fox viewer sees things. Start with the basics: The organization is called Fox News! It’s got news right in its name. And during the day it looks like news, too. It has studios and anchors and reporters who tell you what’s going on around the world. Other networks treat it like a news organization. And that Bret Baier fellow seems pretty fair-minded, doesn’t he?

Now, do you think this all changes when the clock ticks over to 8 pm and the daytime news folks give way to the primetime stars? Do Fox viewers suddenly realize that everything is different and this is no longer news? Nope. It’s just a different set of anchors and a different set of guests. But it’s all still news. Right?

Many of you will find this hard to believe. Perhaps you cling to the notion that the real problem is the tainted information Fox delivers even during its news programs. It’s not. The problem is (currently) Tucker and Sean and Laura and Lou and Jeanine and all the rest of the insanity posse. You know they’re different from everyday news anchors but the average person doesn’t. The average person simply has no idea how news works. It’s all just an interchangeable set of people in suits and ties, some of whom you like better than others.

If you don’t believe me, go ahead and ask a few friends some basic questions about the news biz.¹ Who writes the headlines in a newspaper? What’s an op-ed? Who decides which stories to play up every day? How does advertising affect news content? You will find that their ignorance is near total.

I continue to be haunted by an offhand question a friend asked me a few years ago. I don’t remember what the Fox outrage du jour was, but he asked me why I was skeptical. It was something so outrageous that I wasn’t prepared for it, so I just said lamely, “They’re lying.” He asked, in all sincerity I think, “But why would they lie?” I had no answer—not one that would do me any good, anyway. As far as he was concerned, Fox was a news outlet. Why would a news outlet baldly lie?

And he was right. A news outlet might get something wrong. It might have biases here and there. But their job is to tell you what happened in the world. They don’t just lie about it. So why should he believe that Fox News lies? All of us smart folks know the answer, but it’s not one that will persuade anybody who doesn’t already believe it.

But what about social media? Over at New York, Kara Swisher says it’s time for Facebook and Twitter to ban Donald Trump forever. Sure. Fine. But this is just a distraction. I have much more to say about this, which I will share with you someday,² but social media isn’t fundamentally our problem. The evidence we have suggests that social media appeals primarily to people who are already part of a conspiratorial bubble and it therefore doesn’t really change a lot of minds. Minds get changed only when one of its hobbyhorses gets picked up by mainstream news—which usually means Fox. And the evidence on that score is very clear: Fox does change minds and it does influence elections—and Republican politicians know it. Donald Trump is not fundamentally the problem with American politics right now. He is merely the unsurprising product of a quarter century of Fox News.

Fox is the cesspool from which our political polarization and 50-50 hatred arise. Newt Gingrich may have been the original instigator, but his influence was less personal than it was institutional: he provided Roger Ailes and Rupert Murdoch with the blueprint for a market-dominating cable outlet dedicated to Gingrich’s vision. Until that changes, the United States will never be whole again.

¹Ideally, these will be people who aren’t politics junkies and don’t have college degrees. But just do your best.

²Seriously, I will. There’s quite a bit of evidence to bring to bear on this, but it requires multiple thousands of words to explain. I’ve already written several thousand of those words, and when I’ve finished the rest of them you’ll be the first to know.