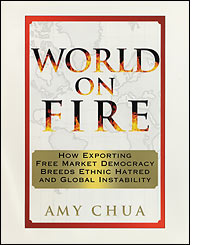 As Amy Chua makes clear at the outset of her grim and thoughtful assessment of all things globalizing, she has an unusually personal stake in the ethnic fallout from our new world order. In 1994, her aunt, an affluent Chinese woman living in the Philippines, was brutally murdered by her chauffeur. The man stole some jewelry and, still carrying a bloody knife in his hands, informed two maids that their employer was dead. He then wandered off, never to be apprehended. The case was hardly unique: Hundreds of Chinese landowners and business-people are killed in the Philippines each year. When Chua, now a professor at Yale Law School, pressed her aunt’s brother about his seeming resignation to the murder, he replied, “That’s the way things are here. This is the Philippines — not America.” For their part, local police wanly recorded the motive for the murder with a single word: “revenge.”

Each of these terse explanations — “not America” and “revenge” — is a key watchword in Chua’s sobering vision of a bitterly divided world and the often bloody intersections of free markets and fledgling democracy. Her research provides an indispensable rejoinder to the millennial reveries of Tom Friedman, George Gilder, and other globalization touts: In the rush to recast many of the world’s nations as investor-friendly democracies, Western business and political leaders are, to extend Chua’s title metaphor, playing with fire. “At no point in history,” Chua writes, “did any Western nation ever implement laissez-faire capitalism and overnight universal suffrage at the same time.” Yet, she adds, this is “the precise formula of free market democracy currently being pressed in developing countries around the world.” Again and again, Chua observes, this reckless experiment has sparked ethnic hatred and violence.

For all the rhetoric of prosperity we hear from the champions of globalization, the reality on the ground is generally far uglier. The poor and landless haven’t seen their lot improve dramatically; and egged on by opportunistic politicians, they have often visited their resentments on what Chua terms “market-dominant minorities” — elites who come to be seen as either foreign interlopers or ethnic menaces. In many Asian nations — the Philippines, Indonesia — they’re the Chinese. In Rwanda, they’re the Tutsis. In Russia, they’re the Jews who dominate that country’s oligarchy. In the ever-tangled Balkans, the Serbs believe the Croats are the market-dominant out-group; in Kosovo, Albanians fill the same role. And so on.

These ethnic hostilities make the inequalities endemic to globalization more than simply unjust; they are, for minority elites suddenly subjected to majority rule, potentially lethal. Democracies can grant a wide berth to roving demagogues, and in the absence of mass literacy and vital dissenting traditions they can grow deeply deformed. In extreme cases, they can become genocidal.

For Chua, such deadly conflicts are a clear signal that we need to slow down the pace of democratization. This, as Chua realizes, is not a position that sits well with either Friedman-style free traders, whose plans for the rest of the world proceed from the embrace of democratization, or the antiglobalization left, who demands that our brave new global institutions be rendered more accountable and participatory. Chua deserves great credit for even raising this issue, and there’s no gainsaying her claim that the catastrophes in Rwanda and the Balkans were abetted by the hasty introduction of democratic structures in populations who believed they had ugly ethnic scores to settle.

Yet she is none too clear on how these ethnic time bombs are to be defused. Chua denounces full-throated democratization schemes in nations like Zimbabwe as “breathtakingly naive” but waves away alternatives as “idealistic.” She winds up arguing that the best hope to free these social orders from the undertow of ethno-nationalism is to instill in ethnic elites a sense of noblesse oblige. Hailing the effectiveness of ethnic “clan associations” in furthering the interests of the Chinese in Southeast Asia, Chua suggests that such groups should take it upon themselves to promote greater economic fairness in those societies. And in her closing pages, she pleads for “voluntary generosity by market-dominated minorities.”

To which it’s hard to avoid replying, Who’s being naive now? Reformers ever since the Progressive Era have pinned hopes for social justice on the actions of an enlightened economic elite, yet this approach has produced little lasting reform. But if Chua had attended a bit more to the history of Western democracy in the Industrial Age, she might have stumbled upon another civic force that did manage to wed democracy and economic fairness: the labor union.

Through struggles for fair wages and greater worker self-management, unions have often come to multiethnic civic ideals ahead of the remainder of our political culture. Moreover, unions — both here and in places like Poland — have effectively fostered the civic participation on which democracy sustains itself. Indeed, it is easy to forget that many of the traits now commonly associated with developing market societies — irrational economic resentments, illiteracy, and ethnic scapegoating — were also held to be fatal weaknesses of our unskilled immigrant labor in the early 20th century. With little state support, these workers organized themselves into fully functioning, prospering, and — over time, to be sure — tolerant, democratic citizens. Reading Amy Chua’s clearheaded, incisive diagnosis of the many ethnic ills of the globalizing era, one is oddly more convinced than ever that organized labor has a world to win.

Chris Lehmann is the deputy editor of the Washington Post Book World and author of the forthcoming Revolt of the Masscult.