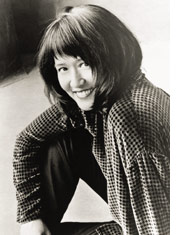 Ruth Ozeki’s acclaimed debut novel, My Year of Meats, has probably converted more than a few readers to vegetarianism. Channeling an engaging mix of Upton Sinclair and Haruki Murakami, Ozeki tells the story of Jane Takagi-Little, a Japanese American filmmaker who lands a gig producing a Japanese TV show called My American Wife! This romanticization of Middle America — sponsored by U.S. beef exporters — leads Jane on a search for wholesome housewives and the perfect prime rib. Along the way she finds a recipe for beef fudge (!) and begins to discover the queasy reality of bovine growth hormones and force-fed antibiotics — not to mention the horrors of American slaughterhouses. The result is a unique tale of love, cultural identity, and beef.

Ozeki herself was a filmmaker before she became a novelist; after a stint art-directing low-budget horror flicks like Robot Holocaust, she began making documentaries about American life for Japanese television, sponsored by the likes of Philip Morris. Her own award-winning documentaries, 1994’s Body of Correspondence and 1995’s Halving the Bones, have been shown at Sundance and on PBS.

The 46-year-old Ozeki’s ambitious new novel, All Over Creation, moves from meat to potatoes with the story of Yumi Fuller, a rebellious daughter who returns to her family’s Idaho potato farm — only to find herself at the center of a firestorm involving genetically engineered spuds, guerrilla environmentalism, and shady corporate PR.

Mother Jones spoke to Ozeki from her home in British Columbia about documentary film, genetic modification, and the tricks of mixing politics and fiction.

MOTHER JONES: How did the switch from filmmaking to novels come about?

Ruth Ozeki: It was a financial thing, largely. I had finished a documentary — Halving the Bones — about my mother and grandmother, who came from Japan, and I was about $30,000 in credit-card debt. I got a grant to do another screenplay but I didn’t have any money to produce it. So I ended up writing My Year of Meats instead. It was really a means-of-production problem. It costs so much to make films. With a novel, you can write the whole thing on a ream of paper from Staples for $4.

MJ: My Year of Meats exposes the way documentaries, like novels, are not always as real as they purport to be. Have you found the two forms to be similar in other ways?

RO: Even though I was making documentaries, my films had fictional elements to them. I think I like blurring those distinctions because so much of what we see on television purports to be the truth, but it’s often largely imaginary — or wishful thinking, or any number of less honorable things. [Laughs.]

MJ: When did you get interested in food production and genetic engineering?

RO: While I was writing My Year of Meats. When I started out, I was really writing about documentary filmmaking — about media and television. It was only by researching the novel that I started to become aware of the problems involved in our industrialized system of food production. That’s what opened my eyes to it. And of course, once your eyes are opened, you really can’t close them again.

MJ: One of your characters says something that I think cuts to the heart of what’s troubling about genetic engineering. He says, “We’re trying to force alien words into the plant’s poem, but we got a problem. Genetic grammar’s a mystery, and our engineers are just one click up the evolutionary ladder from a roomful of monkeys, typing random sonnets on a bank of typewriters.”

RO: I approached this from a literary perspective. Not to say that there aren’t political elements in it; of course there are. But the first time I became interested in this idea of what is natural versus what is artificial was reading Shakespeare — his metaphors of nature in opposition to man’s will. When I started writing All Over Creation, that really was the driving metaphor. How much do we feel the need to tamper with nature? The book starts out with Yumi’s abortion. She’s intervening in the natural processes at the age of 14. Later she’s given the choice to extend her father’s life — to put him on a feeding tube. So those are the two events that sandwich the novel, and in between is this question of genetic modification.

MJ: What kind of research did writing All Over Creation involve?

RO: I spent the last four years reading everything I could get my hands on. I visited farms, I visited labs, met people who were breeding potatoes, I collected potatoes in the wild. It was fascinating.

One of the things I realized is that by the time we consumers are aware of these issues, aware of processes like genetic engineering, they’re already being done. It’s sort of like the war in Iraq: By the time we know about it, it’s almost a fait accompli. And that’s certainly true with science. From an activist standpoint, it’s hard to say, “Stop genetic engineering.” It’s happening. It has gathered so much momentum at this point that it’s not ever going to stop.

MJ: Did your research change your perceptions of genetic engineering?

RO: After talking to the scientists I understand how you can set yourself a problem — like how to breed a potato that’s resistant to the Colorado potato beetle. It’s so easy to focus only on that problem and get excited by the idea of solving it, and to lose sight of the larger picture. It made me realize that if I had been a scientist instead of a novelist, I probably would be in a lab like that, on the cutting edge of genetic engineering. And it made me glad that I’m a novelist, because I get myopic too. We all do. It’s just that as a novelist, there’s a limit to how much damage I can do. [Laughs.]

MJ: All Over Creation is told from multiple points of view — much more so than My Year of Meats.

RO: I think I got a little overambitious, the way one does with a second novel. Part of it was raising the bar, and trying to give myself a challenge. But also, I think that if we don’t learn to inhabit other people’s perspectives, then we’re never going to understand why people do what they do.

It was fascinating, and also really heartbreaking, to talk to a farmer who was having to plow half of his crop into the ground because there was no market for the potatoes, or was going bankrupt because the scale of production was just outstripping his ability to keep up. Or to talk to a scientist who was really excited about the work that she was doing. What’s fascinating to me is the way that multiple stories go into creating any world — a fictional world, but certainly the world that we live in as well. Of course, I cannot control that world. [Laughs.] I can just control the fictional world.

MJ: As a politically interested writer, how do you write a novel about meatpacking or genetic modification that avoids being didactic?

RO: When I start writing these novels, I go into them with a spirit of inquiry, rather than to substantiate prejudices I had in the beginning. If you don’t do that, you can’t write good characters.

In this case — genetic engineering — there’s no way that I could completely wipe the slate clean and go in prejudice-free. But I wanted to see if I could understand, in a deeper way, how this happens, why it happens, who it’s affecting.

MJ: Has the fact that both of your novels are so political caused any problems for them from a marketing standpoint?

RO: I have a wonderful publisher, and I think the reason they support what I write is because it is political. It is kind of amazing, isn’t it? I also think that American readers are looking for this kind of content.

A lot of All Over Creation is about PR, and so is My Year of Meats. It’s about media hype and media misrepresentation. They’re both novels about what we’re fed — both through television or, literally, on our plate. We’re sick of the diet we’ve had for the last 30 years.

RO: : I’ve got another book, a book that I had been working on before All Over Creation. It’s about the film world. But it’s also about the Japanese internment. I had put it aside because I wanted to keep going on the food issues — I was on a roll. This book is more about war. When I put it aside, we weren’t in the situation that we’re in now. Suddenly, it’s become a lot more timely.

MJ: So no more food for a while, then?