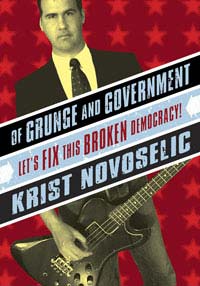 As bassist for Nirvana, Krist Novoselic was one-third of a musical and cultural revolution. With 1991’s Nevermind, the Seattle-bred grunge trio supplanted the self-indulgent bombast of the late ’80s with sensitive, politically conscious music, full of darkly raucous beauty.

In the decade since Kurt Cobain’s suicide, Novoselic has moved toward politics. In 1995, he founded a political action committee that was pivotal in overturning Seattle’s infamous Teen Dance Ordinance, which essentially prohibited all-ages shows. He has since become a leading proponent of instant runoff voting (IRV), which allows voters to rank their choices of candidates. If no candidate emerges with a majority, the lowest vote-getter is dropped, and the second choices of his or her voters are assigned to the appropriate candidates. This continues until there’s a majority winner. IRV not only eliminates the need for separate runoff elections, but it allows citizens to register support for a Nader without robbing a Gore of votes.

His new book, Of Grunge and Government: Let’s Fix This Broken Democracy!, is part music memoir and part political treatise. It’s much like its author: engaging, down to earth, practical, and positive. Mother Jones caught up with Novoselic by phone at his home in Washington state right after Election Day.

Mother Jones: Bush won. Do you have any advice for the despondent?

Krist Novoselic: There’s a lot of gloom and doom nationally, but people just gotta stay engaged and keep believing. Look at the left coast. When Washington came up blue, I was proud! If you’re a Democrat in Washington state, there’s a lot of good news. We’ve got the Senate, House, and it looks like we’re going to pull off the governorship. [At press time, this race was headed toward a recount.] So, dejected Democrats, I say: Think globally and—in bold letters—act locally! The democracy didn’t end on election night. Work to make your city, county, and state the best in the nation. That’s what I’m doing.

MJ: What sparked you to write this book?

KN: I was talking to Danny Goldberg—he used to manage Nirvana—about instant runoff voting. And he said, “You should write a book, Krist.” It turned out more like a pamphlet, because the way I write is just to boil things down. Pamphlets are a quick read—a good vehicle to get the ideas across.

MJ: Do you worry that election reform is too wonky to grab readers?

KN: Have you been following the election in San Francisco? They had an instant- runoff-voting election for the city Board of Supervisors. It’s blowing people’s minds. In the city’s districts, many of the candidates have similar issues and are competing for the same constituencies. With the old system, they would differentiate themselves by tearing each other down, putting the stink on their opponent. But with IRV, candidates are actually endorsing each other. Can you believe that? Candidates are looking at their opponents and saying, “Wow, she’s strong in these neighborhoods, but I’m strong over there. I want to be her voters’ second choice.” So you have candidates meeting and saying, “Why don’t we co-endorse each other?” Isn’t that amazing? We really need instant runoffs in Washington state. In the winner-take-all system, Greens and Democrats hate each other, when they should have a coalition.

MJ: It’s taken years to get this going in a place as liberal as San Francisco. Is it realistic to bring IRV to state-level voting?

KN: People ask me, “How do we do it? How do we get this going?” We gotta do it on the local level. If you’re electing your officers as part of a civic group or organization, use instant runoff voting. Talk to your city council about it. That’s how it’s going to start. And it can work nationally. I was listening to This American Life the other night. They were following MoveOn canvassers, and one old lady—she was in her 70s—they knocked on her door, and she said she wasn’t voting for Kerry or Bush. She was going to write in ZZ Top. Now, I love ZZ Top. So at first I thought, right on. [Laughs.] But then I thought, with instant runoff voting, this lady would have more choices and feel better about democracy. Voters would be less cynical.

MJ: What feeds that cynicism?

KN: Look at what a poor value we’re getting for our democracy. Look at the House of Representatives—20 or 30 races are competitive out of 435. That’s a good deal for the special interests, because they can pour millions of ad dollars into a handful of races. They’re getting a good value. And citizens? We’re getting a poor value.

MJ: What lessons do you take away from the presidential campaign?

KN: Democrats need some coherent policy proposals that are easy for people to digest. Bush ran for something. A lot of Democrats ran against Bush. That just doesn’t get you anywhere. That’s part of a bad trend on the left. Lefties are always bagging on Fox News and on talk radio. I think that progressives should be advocating policy: “Here’s our health care plan. Here’s our plan for peace. Here’s our plan for prosperity.” Why get hung up on all that Rush Limbaugh crap? It’s all garbage. People want something positive.

MJ: Which artist do you think is most successful at galvanizing people politically?

KN: I love the new Green Day record. It’s a masterpiece. It’s ambitious musically, it’s ambitious in what it wants to say, and I think it succeeds tremendously in both ways. In general, I’m excited that musicians are speaking out and not falling for that idea that “musicians shouldn’t say things.” Democracy is everybody’s business.

MJ: Do you have a favorite political song?

MJ: What about a campaign song?

KN: “Don’t Stop (Thinking About Tomorrow).” That was a good one. The music rallies people. When someone like Bruce Springsteen endorses a candidate, it’s something that even a former president can’t offer. It’s sublime, because people connect with music. But then again, you shouldn’t hold it against musicians because they endorsed Bush or endorsed Kerry. Like the people who call the Dixie Chicks sluts and whores—it seems like you can’t have a political discourse anymore. And if they voted for Bush, it doesn’t mean they’re idiots. Don’t hang up on people, or how are you going to get things done?

KN: No. I’m doing politics pretty much full time. Music is still my passion, but I realized last year that I had this habit where I had to be in a band—always. It was like, “Oh my god, I’m not in a band.” Then I realized, I don’t need to do that. I can just play and have fun.