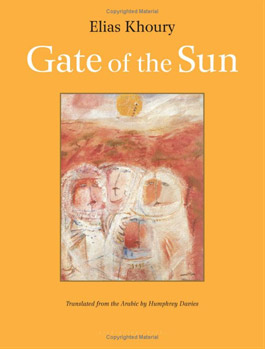 Gate of the Sun is Lebanese writer Elias Khoury’s poignant, epic tale of the Palestinian refugee experience. Published in Arabic on the 50th anniversary of the of the 1948 war—known to Israelis as the War of Independence and to Palestinians as Al Nakbah, “the catastrophe”—Khoury’s novel beautifully depicts the very human struggles, over five decades, of Palestinians living in Israel, the West Bank, and Lebanon.

As the novel opens, an aged Palestinian, Yunes Al-Asadi, lies dying in a run-down hospital in Beirut’s Shatila refugee camp in 1995. His doctor and old comrade, Khalil Ayyoub, sits at his bedside retelling the stories of their lives. Born in the 1930s, Yunes, like many Palestinian men of his generation, enlists as a young man in the struggle for a Palestinian homeland. Growing up under the British Mandate, he roams the hills with other young men from his Galilee village, learning to fight.

Separated from his young wide during the 1948 war, Yunes retreats with other displaced Palestinians to Lebanon, where he becomes a leader in what would later become the PLO. He smuggles weapons into Palestinian lands and eventually commands military training camps in southern Lebanon. Torn between duty to Palestine and love for his wife Nahilah, who now lives in a Palestinian village inside Israel, Yunes spends 30 years dodging Israeli patrols as he crosses and recrosses the mountainous border between Lebanon and Israel. Nahilah creates a clandestine home for him in the caves near their Galilee village. It’s in this cave, which Yunes calls Bab al Shams – “Door to the Sun” – that Yunes and Nahila’s love grows, and where the reader learns to see beyond Yunes the fighter.

Born to a Christian family in 1948, a veteran of Lebanon’s bloody civil war, Khoury is a lifelong advocate for human rights. In the 1970s, he worked for the PLO’s Palestine Research Center interviewing Palestinian refugees in Lebanon and Jordan, gaining insights that enrich this novel. He deftly interweaves the lives of his characters’ with the last 50 years of the region’s history. He teaches us about 1948, Lebanon’s civil war and the post-Oslo period, but also draws nuanced, convincing, human characters. And the novel breaks with much of the region’s literature, which tends to caricature Israelis as cutthroats and Palestinians as victims, by unpacking commonplace notions of heroism and revealing the conflict, personal pain, and daily struggle that actually make up the refugee experience.

Knoury reveals how traumatic stories of exile and loss live on within today’s Palestinians.” While stories of families preserving wrought-iron keys to homes now located in Israel are staples of Palestinian lore, the English translation of Gate of the Sun joins a small collection of books that explore the more complex reality beneath these politicized narratives. As so often with exiles, Khoury’s characters braid their own memories of Palestine with the stories they’ve heard from others, leaving the reader with paradoxes, unresolved questions, and stories with multiple endings.

Khoury has written a story of exile rich with the cadences of the oral history that Palestinians value, and whose pages are haunted by a lost Palestine. His book stands as proof that a novel can reach secrets non-fiction accounts cannot know. Gate of the Sun offers a necessary and complex exploration of what fuels the pain and passion of an exiled people.