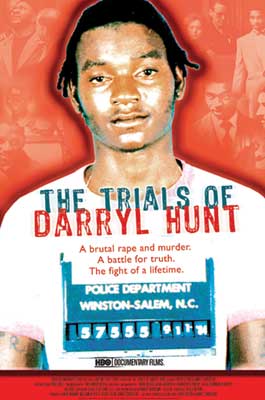 In the summer of 1984, 19-year-old African American Darryl Hunt was arrested for the rape and murder of a white woman, Deborah Sykes, a newspaper copy editor in Winston-Salem, North Carolina. Forensic evidence failed to match Hunt to the crime, but he was swiftly convicted by an all-white jury on the basis of an alleged witness’ dubious 911 call, and on the testimonies of a Klansman and a cocaine-addicted teenage prostitute. Ten years into a life sentence, Hunt was denied a third trial by the Supreme Court despite dna evidence that revealed Hunt wasn’t Sykes’ rapist. Against all odds, Hunt’s hope—and that of his indefatigable defense attorneys—emerges from those fragile genetic strands.Tenacious themselves, codirectors Ricki Stern and Annie Sundberg followed Hunt’s harrowing story for more than a decade. Their film’s quiet rage against the perpetrators of gross criminal injustice is enriched by the characterization of Hunt as a man who somehow maintained his composure and his faith over 20 years, even as those working overtime to free him began to doubt they’d ever succeed. As one supporter states, “Racism is more powerful than facts.” This searing documentary makes you understand and even feel that despairing sentiment, but Hunt’s strength surpasses all else. He was finally released in 2004, and in February 2007 the City of Winston-Salem gave Hunt a $1.65 million settlement and formally apologized “for all that he has endured and suffered.”