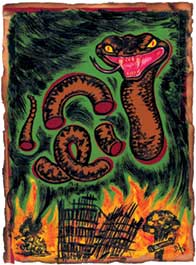 The Infernal Machine: A History
of Terrorism

I don’t often agree with Donald Rumsfeld. But the former secretary of defense got one thing right when he made a valiant effort two years ago to rebrand the Global War on Terror as the Global Struggle Against Violent Extremism. It didn’t work, of course: “gsave” didn’t have the right ring to it, and President Bush never appeared to buy into it anyway. Still, it was an indication that at least a few of the professional ostriches in the administration had begun to notice something important: that the war on terror isn’t a war and it isn’t directed against terrorism.

So what is it then? In the months immediately following 9/11, this was the kind of topic that got a lot of attention. Today, it’s been squeezed out by the day-to-day minutiae of the Iraq War and the prospect of war with Iran. These are, God knows, urgent matters. But they’ve sucked the oxygen away from arguably more important issues, and that has allowed several long—established conservative assumptions about the war on terror—or whatever it is—to calcify into conventional wisdom, even among many liberals.

Two new books give us a chance to revisit those assumptions. The first, Matthew Carr’s The Infernal Machine, is the American edition of Unknown Soldiers: How Terrorism Transformed the Modern World, published last year in Great Britain. Carr provides a guided tour of the past century of terrorism, starting with the assassination of Czar Alexander II by a pair of anarchist bomb-throwers in 1881 and culminating in the atrocities of 9/11. But this is no dispassionate work of history. Carr’s goal is to demystify terrorism, removing it from the realm of incomprehensible and unprecedented insanity that it occupies in the popular media. He places terrorism squarely in its proper context as a long-standing and commonplace tactic of war, used by both insurgent groups and governments alike.

During the Battle of Algiers, the French army famously employed terror tactics every bit as promiscuously as the nationalist guerrillas it was fighting. The Israelis are reported to have approved the use of car bombs in 1980s Lebanon. And the United States betrayed no qualms over the tactics its mujahideen proxy fighters employed against the Soviets in Afghanistan. As Carr observes, “Even the most powerful nations will observe the rules of conventional war only as long as they have some chance of winning through conventional means.” In none of these cases was terror itself the enemy. Terrorism was merely a tactic, used by both sides because it happened to be the most effective tool available. And though generals may be paid to devise ways to counter their enemies’ tactics, countries don’t go to war against tactics. They go to war against the people using them.

So why did the Bush administration decide to declare war on terrorism after 9/11? Partly because, as Carr documents, military overreaction is the historically most common response to terrorist threats: Doing something—anything—is usually the first order of business. It was also a convenient way to take any meaningful discussion of America’s policy in the Middle East off the table. This is evident in the popular conservative trope “They hate us for our freedoms,” a handy phrase that preempts any critical investigation of our actions abroad. After all, what’s the point of self-reflection if the real cause of Muslim rage is the Bill of Rights? That’s hardly a negotiable document. Recently, Dinesh D’Souza road-tested an even more malignant version of this idea—”They hate us for our immorality”—suggesting that the real enemy is social liberalism. For movement conservatives, it doesn’t get much better than that.

such muscular myopia may be a thoroughly flawed strategy, but it does succeed at deflecting attention from the question of whether our problems are partly a result of our own actions and policies in the Middle East. As Stephen Holmes puts it in The Matador’s Cape, “To recognize that America’s fundamental problem is Islamic radicalism, and terrorism only a symptom, is to invite a political solution.”

The Matador’s Cape—the title is an allusion to Osama bin Laden’s boast that the 9/11 attacks were designed to bait the United States into a berserk overreaction—is a collection of previously published essays repackaged into a semi-coherent, but often sharp, narrative of America’s “reckless response” to 9/11. Holmes identifies several reasons, some prosaic, for the administration’s decision to declare war on terrorism rather than on Islamic radicalism. A broader war was Dick Cheney’s preferred justification for a massive expansion of executive power, one of his goals since he worked in the Ford administration three decades ago. For Rumsfeld, it was a way to have the Pentagon lead the response to 9/11 while providing a boost for his pet project of military transformation. For George W. Bush, it’s harder to say. Perhaps he couldn’t resist the call to become a “wartime president.”

In any case, all three men also appear to have shared a debilitating Cold War belief that only states can truly cause serious damage. As Paul Wolfowitz, then the Pentagon’s No. 2 man, told terrorism czar Richard Clarke tersely in the spring of 2001, “You give bin Laden too much credit.” Even after bin Laden’s deadly power was later confirmed, the administration’s major players never gave up their obsession with state-sponsored terrorism. The result was a war against Iraq instead of a war against Al Qaeda.

This has been disastrous for several reasons. First, as Holmes argues, a fight against Al Qaeda is eminently winnable. Not easy or short, but winnable. The war in Iraq, on the other hand, is not only beyond winnable but from the get-go had the profoundly ruinous side effect of alienating our natural allies in the battle against violent radicals. “Instead of driving fundamentalist and nationalist movements apart,” Holmes points out, Bush “has driven them together. He has unwittingly channeled the powerful passions of frustrated nationalism into what would otherwise have remained a dangerous but uprooted and therefore manageable anti-American jihad.” How’s that for irony? George W. Bush, the master of domestic wedge politics, failed to grasp the possibility of exploiting wedges against our foreign enemies. Just as people with hammers view every problem as a nail—an image Holmes is fond of—the world’s only superpower became fatally predisposed to viewing its overseas problems as military ones.

A military response to 9/11 would have made sense had it been directed narrowly at Al Qaeda and like-minded hardcore jihadists, who are motivated by a complex stew of religious fanaticism and rage that leaves no room for negotiation. But in the long run, jihadists can cause serious, long-lasting damage only if they have substantial popular support. Without it they wither and eventually die. Unfortunately, our blinkered response to 9/11, including large-scale warfare and support for dictators throughout the Middle East, has instead increased the popularity of the violent radicals and put us implicitly at war with an entire region, rather than with a small and—until recently—unloved band of Sunni extremists. If there’s a lesson from the sorry mess Bush has made, this is it: The only way to beat Al Qaeda is to wage what you might call a global counterinsurgency campaign, separating the terrorists from the surrounding population and getting the broader Muslim world on our side.

This idea is hardly an original one. In fact, it’s Counterterrorism 101. But even after five years of the administration’s flailings, the mainstream media rarely engages with it. It probably doesn’t seem “serious” enough. But original or not, if we’re going to win this war it needs to be repeated until it finally sinks in. Holmes and Carr don’t provide much specific guidance on how to get the war on terror back on track, but their criticisms do illuminate a way forward. This includes reforming the U.S. military so that it can fight counterinsurgencies and perform peacekeeping; renouncing the Bush doctrine of preventive war; reaffirming our commitment to multilateral institutions; taking nuclear nonproliferation seriously; once again acting as an honest broker in the Middle East peace process; and making aggressive use of public diplomacy and economic engagement to bring the Muslim world into the global community.

In the end, we won the Cold War because Eastern European countries wanted to join the West. We really did have a more successful, more tolerant, more liberal society than the Soviets, and ultimately that was what made the difference. Likewise, right after 9/11, when most residents of the Middle East were shocked and disgusted by Al Qaeda’s attacks, it would have been possible to start securing their long-term support for a campaign against violent Islamic extremism. Instead, we chose a course that did just the opposite. But even after nearly six years of digging ourselves deeper into this hole, it’s not too late to begin digging ourselves out. Here’s hoping that our next president understands where to start.