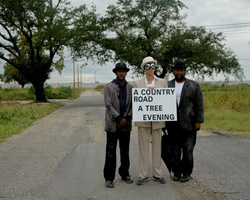 There is perhaps no more fitting backdrop for a production of Samuel Beckett’s Waiting for Godot—whose main characters, Didi and Gogo, spend two acts waiting for a man who never arrives—than New Orleans, where some residents died waiting for rescue after Katrina struck and others still have yet to see their neighborhoods rebuilt.

Earlier this month, the Classical Theatre of Harlem, together with Creative Time, a New York-based art collective, wrapped up a two-week run of Beckett’s most renowned work with a final production in the Gentilly neighborhood. The play’s organizers had to turn people away the weekend before, when Didi and Gogo did their waiting in the still-decimated Lower Ninth Ward.

Even though the play was mounted in two locations, Paul Chan, the artist behind the project, made sure that the whole city felt Godot’s presence (or rather, his absence). Creative Time is known for its “public art,” including the lights that shine up from the World Trade Center site every September 11. Chan wanted this project to have a public-art aspect, too. Across New Orleans, telephone poles bore simple signs with the first three lines of the play: “A country road. A tree. Evening.” Chan also snapped photos of actors and locals standing in front of destroyed buildings and damaged houses holding up his signs. “Any empty lot or street corner in New Orleans could serve as the setting for Godot,” Chan says. But for New Orleanians, the two nights the production spent in the Lower Ninth at the beginning of November were especially poignant.

Chan’s photos of that setting (reproduced above) are striking. Two trees bracket a lonely stretch of road that ends at a concrete levee. Tilted utility poles dot an otherwise-empty landscape. Meanwhile, elsewhere in the city the smell of sawdust and the whine of power saws are a constant distraction. The “other” New Orleans isn’t just rebuilding; much of it has been rebuilt. But in the Ninth Ward, behind Didi and Gogo, the only sign of recent construction is a high concrete wall that keeps the waters of the New Orleans Industrial Canal at bay.

South of the Claiborne Bridge, closer to the Mississippi and south of the breach in the canal that leveled dozens of houses and landed a barge in the middle of a city block, some of the houses are still standing. Barely. But most of them are burned out, tilted over, or abandoned. Spray-painted signs inform authorities of the houses’ various states of disrepair. Most have numbers surrounding two crossed lines, a secret language of search and rescue indecipherable to the layman. “Do not demolish,” is spray-painted on the side of a house that’s listing on its side on an abandoned street. “Rebuilding.” Another house has a red arrow pointing to the foot-high space between its floor and the sodden ground. The spray-painted words above the arrow read “dead dog.” It’s been more than two years since the flood.

But in the hardest-hit areas of the Ward, just north of the Claiborne Bridge, there are no houses. There’s nothing but block after block of empty, overgrown lots. What’s striking isn’t the presence of death or destruction—it’s the absence of normal urban life. The only reminder of the homes that were destroyed is the occasional front stoop poking up through the weeds. It’s remarkable how quickly nature has reclaimed this place. High grass now covers the lots where the small, narrow houses of the Lower Ninth once stood.

In his artist’s statement about the project, Paul Chan writes, “…There was a terrible symmetry between the reality of New Orleans post-Katrina and the essence of this play, which expresses in stark eloquence the cruel and funny things people do while they wait: for help, for food, for hope.” Those obvious parallels are what made the decision to mount Beckett’s play here so apt. The point was certainly not lost on the people who did so much waiting after Katrina: Outdoors, in this devastated corner of the city, hundreds of people turned out for each showing of Godot. But still, in the empty blocks of the Lower Ninth, it’s as if, one day, all the people just got up and left. They did live here, once. Now they just wait to return.