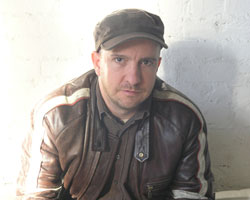 Before interviewing Magnetic Fields front man Stephin Merritt, I read on Wikipedia that he doesn’t use verbal placeholders like “um” and “like.” In this case it was right—verbal tics, misfires, hems, and haws seem to be simply beneath him. When he’s searching for a word, he simply stops talking (the long midconversation silences take some definite getting used to). And a ramblin’ man Merritt is not—he has no qualms about giving monosyllabic answers.

If he’s—shall we say—economic in speech, Merritt, 41, is downright loquacious in song. In addition to Magnetic Fields, he fronts three other bands: The 6ths, Future Bible Heroes, and the Gothic Archies. Each has its distinct style, but all share a few trademarks: literary lyrics; catchy melody; and, when Merritt’s singing, croonerish bass vocals and deadpan delivery. Most Magnetic Fields albums have ambitious themes (The Charm of the Highway Strip: traveling; i: songs that begin with the letter ‘i’; 69 Love Songs: obvious). Distortion, which comes out this month, has two: It is made up entirely of three-minute pop songs, and, as the album title suggests, there’s a whole lot of feedback—on every instrument, even the accordion. An album full of short, static-heavy songs might sound boring, but fear not: This is Merritt at his most playful. Witness a verse from the second track, “California Girls”:

They ain’t broke, so they put on airs,
The faux folks sans derrieres
They breathe coke and they have affairs
With each passing rock star
They come on like squares
Then get off like squirrels
I hate California girls

We asked Merritt about the new album, his critics, and his musical inspiration, and he answered us. Mostly.

Mother Jones: Your new album involves feedback on every instrument. What was the inspiration for all that feedback?

Stephin Merritt: Psychocandy, the Jesus and Mary Chain album, which I’ve been listening to since it came out 20 years ago, so I feel like I know it pretty well. I wanted to make a record quickly, and I thought by doing a short tribute, an homage to Psychocandy, I could make it quickly. It didn’t work out that way.

MJ: How long did the album take?

SM: A month to record, and a year and a half to make.

MJ: I read that you’re not going to take the feedback on the road, yet feedback seems to be the whole point of the record. What’s a fan to expect?

SM: Well, we’ve never tried to simulate the sound of our records onstage. So anyone who has seen us play within the last 10 years is not going to be surprised by our live sound. Except that I’m switching from ukulele to bouzouki.

SM: [Exasperated] What’s a bouzouki? It’s an eight-string mandolin-family instrument with a long neck. It’s used a lot in Greek and Irish music. It sounds kind of like a 12-string guitar without the lower strings.

MJ: What made you choose that particular instrument?

MJ: The new album is made up entirely of three-minute pop songs. What is it about that form that’s so appealing?

SM: I don’t really think it’s about it being appealing. I think it’s about what sounded good on a 45 rpm single. Longer than three minutes started degrading the sound quality, and the sound quality was already crummy enough that you didn’t want to do that. So rock music was defined by what sounded good on a 45. We’ve gone absolutely back to the days of the 45. We have the crummiest sound systems playing songs that don’t fit together into albums, and basically we’re back into very poor sound-quality format, only now we have much tighter radio formatting, so that everyone has to play within some very small number of genres to get on the radio at all.

MJ: Is it an attention-span thing at all?

SM: No. I think as CDs came in songs got longer—top 40 songs got longer. The 11-minute guitar and drum solo went out, fortunately, about the time that CDs came in. But for commercial singles, almost everything is longer than three minutes. I’m not sure why that is. I guess people no longer feel tied to 45s, so they have more time to repeat the seventh and eighth chorus. As a result records are much less catchy than they used to be.

MJ: Sasha Frere-Jones has implied that the fact that you don’t like hip-hop music is racist. That got a lot of media play. What was the worst part about that whole debacle for you?

SM: I actually don’t talk about that. I don’t feel like publicizing him or her.

MJ: In a former life you were a music critic. Why’d you give it up?

SM: I gave up music criticism because of the increasingly obvious conflict of interest. I couldn’t say anything bad about the records when I might be meeting that person’s manager backstage an hour later.

SM: No, but I do miss getting records in the mail for free. Unfortunately, I was doing a lot of Christmas reviews so 50 percent of the records I got in the mail were Christmas albums.

MJ: You’ve done some soundtracks: the audio versions of the Lemony Snicket books, the Volvo commercial, The Adventures of Pete & Pete. How do you choose the projects you do?

SM: They chose me. They were all from someone calling up and proposing that I do it.

MJ: Surely you must get more calls than projects you sign on to.

SM: No, not for soundtracks. I actually don’t remember ever turning anyone down, actually, unless they were not offering me any money whatsoever, as in, “I’m making a student film, and I’d really like it if you would spend the next five years making a soundtrack for it—with the London Symphony Orchestra—for free. How about it?”

MJ: Do you get a lot of those calls?

MJ: You grew up with a mom who has been described as counterculture, and you went to the famously counterculture high school, the Cambridge School of Weston. Mainstream culture is a part of most teenagers’ experiences, but it doesn’t sound like that was true for you. How did those experiences affect your perspective and music?

SM: There’s no way of my telling. I don’t know what it’s like to grow up in ways other than how I did, except for how that’s portrayed in movies and such. I didn’t really realize that not everyone is a hippie.

MJ: What were some of the first bands you got into?

SM: One of my earliest memories is going to the Jefferson Airplane and Odetta concert with my mother. My primary impression was fear. Grace Slick at one point said from the stage, “They’re killing children over there.” And she obviously meant in Vietnam, but I was too young to understand that, and I thought she meant, “They’re killing children over there,” meaning that side of the stage. So I thought Grace Slick was going to kill me.

MJ: When I was little I heard the dictator Noriega was on the loose, and I got scared because I thought he might try to come hide out in my house.

MJ: You said in a previous interview that you think the indie-rock ghetto has completely disappeared. Really?

SM: Hasn’t it? Who’s in it? I’m talking about the language. “Indie” as opposed to some near synonym, like “alternative.” I think alternative has probably taken over completely what people used to call indie. In Britain there’s still something called indie—it seems to have some kind of association with your clothing and your lifestyle and which drugs you take and what subjects you’re good at in school. A huge variety of artists are considered indie, which would make us scratch our heads. Oasis, for example, I think is considered indie, though we would consider them arena rock.

MJ: I’ve heard you’re really into Abba. What’s so great about them?

SM: What isn’t great about Abba? They’re fantastic singers, fantastic songwriters. Musically they can do just about any style they put their minds to.

MJ: Does that extend to the Abba-based musical Mamma Mia?

SM: Mamma Mia wasn’t really made by them. It’s a jukebox musical of their music.