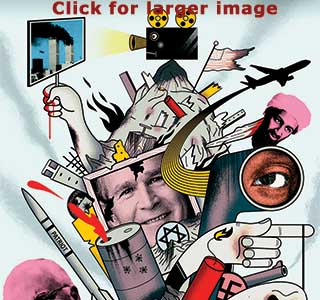 
for the past few years, I’ve received a steady, unsolicited stream of books and dvds that purport to reveal What Really Happened on September 11. None of them have come close to convincing me that George W. Bush and his neocon cronies were either evil or, more important, smart enough to have orchestrated the terrorist attacks on the United States. Perhaps that’s because I’m one of the media gatekeepers that the “9/11 truth movement” is fond of blaming for its lack of visibility and credibility. (According to Barrie Zwicker’s Towers of Deception: The Media Cover-Up of 9/11, Mother Jones is part of the “phony ‘left’ media” co-opted by the “diaboligarchy.”)

But I’ve held on to my growing library of 9/11 skepticism both as an artifact of an unpopular delusion and a guilty pleasure. In spite of my shadow-government puppet masters, I find the “Truthers'” mix of feverish delusions and all-American idealism oddly entertaining.

So when a couple of feature-length 9/11 conspiracy movies recently landed on my desk, I felt a twinge of anticipation. The Reflecting Pool and Able Danger are, as far as I can tell, the first thrillers inspired by Truther theories. Maybe, I thought, these films would have a dash of paranoid style. And just maybe they’d have what’s missing in the online hall of mirrors that spawned the 9/11 truth movement—coherence.

These films are another sign of the endurance of the biggest conspiracy theory since—pick your favorite—the cia/the Mafia/Castro killed JFK. September 11 truthiness will be one of the many bad hangovers of the Bush years. A 2006 Scripps Howard poll found that 36 percent of Americans think the government was somehow behind the attacks. Significant numbers also subscribe to the Truthers’ various hypotheses for how it all went down: 16 percent said that the World Trade Center was actually destroyed by hidden bombs; 12 percent said the Pentagon was not hit by an airplane, but a missile. (The survey did not tally the popularity of other nuggets of —Truther lore, such as the idea that 7 wtc was purposely demolished, that Flight 93 was shot down, that Mohammed Atta was a patsy, or that no planes hit the twin towers.) A handful of celebrities—Rosie O’Donnell, Charlie Sheen, Willie Nelson—have recited parts of the Truther catechism. There is 9/11 conspiracy folk music (Jesse Goplen’s “Controlled Demolition”) and hip-hop (Mos Def and Immortal Technique’s “Bin Laden,” which declares, “Bush knocked down the towers”). But the closest thing to a breakout work of pop culture is Steve Alten’s The Shell Game, a Clancyesque thriller in which neocons try to best their 9/11 scheme by detonating a suitcase nuke in Los Angeles and pinning the blame on Iran.

What better way, then, to popularize an only-in-the-movies version of reality than with a movie? It’s telling that the director of Loose Change, the best-known series of 9/11 conspiracy documentaries thus far, originally planned to write a screenplay for a fictional thriller. The Reflecting Pool and Able Danger aspire to be conventional movies; they adhere to the formula for conspiracy thrillers, from The Parallax View to The Da Vinci Code. Both follow a protagonist whose discovery of the awful truth is confirmed by the mobilization of powerful forces intent on silencing him. Yet while most conspiracy flicks rely on viewers to check their BS detectors at the door, the 9/11 movies don’t want you to suspend your disbelief. Just the opposite: They want you to walk away a believer.

Fittingly, The Reflecting Pool begins with a journalist receiving a 9/11 conspiracy video. Lead character Alex Prokop, a reporter for a liberal California newsmagazine, is initially wary of questioning the official story. But in the first of many journalistic sins, he teams up with Paul Cooper, a 9/11 “researcher”—one of the exalted Googlemaniacs who form the truth movement’s brain trust. Cooper’s daughter died when Flight 11 supposedly hit the north tower, and he’s pursuing a rico suit against half the government. Aside from that, he’s a totally reliable source.

Prokop and Cooper interview a parade of composite characters who rehash the conspiracy movement’s greatest hits. Prokop doesn’t swallow every wacky hypothesis; he flips out after a Deep Throat-style meeting in a parking garage with a guy who rants about “holographic technology.” Then he and Cooper go back to their hotel room and use wooden blocks and model airplanes to deduce that the Pentagon must have been hit by a missile.

While The Reflecting Pool is plodding and pedantic, Able Danger at least tries to make the preposterous fun. Shot in a neonoir style, its hero is Thomas Flynn, an affectless Brooklyn hipster who’s written his own alternate history of 9/11. A mysterious Central European woman finds him, claiming to be in possession of a hard drive containing evidence of official foreknowledge of the 9/11 plot. After getting his hands on her MacGuffin, Flynn gets tangled in a web of deception and cartoonish characters, such as Luther, a cravat-wearing, Muhammad-praising baddie who sounds like a B-movie Nazi: “Vat shall ve talk about?”

Able Danger tips its tinfoil trucker’s cap to The Maltese Falcon, but its other inspiration appears to be Enemy of the State, the 1998 thriller in which Will Smith is stalked by an all-seeing National Security Agency. The high-tech surveillance team that’s tracking Flynn identifies him as a “high-value target: anti-regime propagandist.” When the men in black drag Flynn into an suv, one reminds him, “Don’t think because you operate in a little café in nowheresville Brooklyn that you’re not being watched.” Just because you’re paranoid doesn’t mean the government isn’t reading your blog.

Needless to say, the Truthers have yet to find their Chris Carter or Oliver Stone. These movies repackage 9/11 skepticism in an accessible format, but they’re practically inscrutable without descending further into the rabbit hole. Able Danger can only be understood by reading The Big Wedding by Sander Hicks, an indie journalist whose version of 9/11 involves an alliance of Islamists, neo-Nazis, technofascists, and a Republican “pedophilia cult.” And God help you if you turn on the droning filmmakers’ commentary on The Reflecting Pool dvd.

But the most annoying thing about the movies—and the Truthers—is that the actual truth, in all its awful complexity, isn’t enough for them. No matter that 3,000 Americans died because of bungling and blowback, or that the Bush administration twisted their deaths into pretexts for unnecessary war and executive power run amok. The Truthers want more. They’ve missed the real lesson of the Bush administration, which is not that a secretive cabal runs the White House, but that its diabolic intent has been trumped by its staggering incompetence. Seven years on, the neocon notion that imperial power can reshape reality has been fully exposed as a fantasy. Yet the Truthers cling to the myth of official omnipotence, making them some of the last Americans who still believe that this administration could successfully pull off anything bigger than T-ball on the South Lawn.

To be sure, the Bush administration has made it all too easy to succumb to conspiratorial thinking. Due to official stalling and stonewalling, the full story of September 11 remains a work in progress. The 9/11 Commission’s official account glossed over uncomfortable questions but read like a page-turner. Fittingly, a nation hungry for answers gobbled it up; nearly 9 million copies of the report were sold or downloaded, and it enjoyed a second life in comic-book form. The 9/11 skeptics have tapped into this desire for answers—a common Truther refrain is that they’re “just asking questions.” But that’s like proponents of intelligent design saying they don’t know how the universe was created. The Truthers aren’t filling in the gaps in our reality; they’re already living in an alternate one.

As Don DeLillo, no stranger to the power of conspiracy theories, observed shortly after 9/11, the terrorist attacks were a profound break in our narrative about how the world works and America’s place in it. “The narrative ends in the rubble and it is left to us to create the counternarrative,” he wrote in Harper‘s. That was before the Bush administration stepped in and wrote a counternarrative in which the United States was locked in an endless existential battle with a fathomlessly evil foe.

The dubiousness of that hastily improvised scenario is now apparent. Yet the 9/11 truth movement’s narrative is just as maddeningly inadequate—and unimaginative—as the neocons’. —A parallel universe inhabited only by patriots and pawns is an intriguing place to spend a couple of hours if you’re watching 24 or a movie like Able Danger. But it’s not the world we must face after the final credits roll.