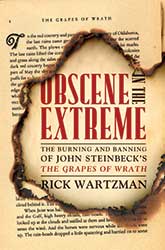 
When The Grapes of Wrath hit the shelves in 1939, it wasn’t exactly the feel-good book of the year. John Steinbeck’s tale of Depression-era misery was so bleak that critics responded with sanitized novels like Plums of Plenty and Of Human Kindness, in which Dust Bowl refugees get to live the American Dream. Grapes of Gladness, written by an aspiring real estate tycoon, tells of a family of Okies who find their fortune in California, the “Land of Sunshine, Fruit, Flowers, and Marvelous Industrial Development.” These cheery volumes are among the many details unearthed in Rick Wartzman’s engaging look at the long-forgotten campaign to quash a modern classic.

Grapes caused a scandal in California, where the wealthy farmers who’d gotten rich off migrant farmworkers like Steinbeck’s fictional Joads rushed to ban it as indecent and inflammatory. Characters such as an eccentric anti-Grapes crusader who dressed in green and a blind country lawyer who defended the novel on First Amendment grounds sweep in and out of Wartzman’s lively account. And in a stranger-than-fiction twist, the most vocal censors are revealed to be part of the kkk‘s short-lived Golden State branch.

Amid the controversy, Steinbeck emerges as a tireless researcher who based many of the details in Grapes on fact. The iconic scene in which one of the Joad girls breastfeeds a starving man was told to Steinbeck by a real-life hobo who responded to an ad offering $2 for interesting life stories. Critics were quick to dismiss graphic scenes like this—which used words like “tit” and “shitheel”—as dehumanizing to migrants. Not all readers agreed. “We kneed friends like you,” one Okie wrote Steinbeck, praising the gritty realism that came to ensure the book’s long shelf life.