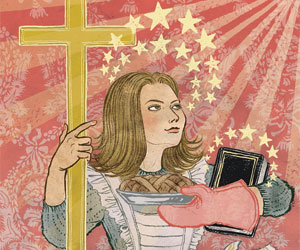 i first encounter “teacher and exhorter” Martha Peace at a Sunday-school hall on the campus of the First Baptist Church of Jonesboro, an 8,000-person megachurch in this verdant Atlanta suburb. Spacious enough to host its own congregation, the hall is flanked by embroidered banners bearing shields, birds, and crowns. The evening’s emcee, Leanne, a peppy blonde with frosty blue eye shadow, says they represent the virtues of the nearly 120 women who came to see Peace speak as part of the church’s “Women of Purpose” series. As daughters of the king of kings, Leanne explains, all Christian women wear crowns. But with that honor comes a mandate to apply their faith at home.

Peace is here to help. Over the past two decades, the 62-year-old Georgia native and former nurse has written five books on biblical womanhood, conservative Christianity’s answer to the women’s movement. Among them are The Excellent Wife, now a classic in this burgeoning niche, and Damsels in Distress, a set of biblical solutions to female problems ranging from pms to depression to “feminist tendencies.” It’s common for a young Christian wife to rebel against home life as her primary ministry, Peace writes in Becoming a Titus 2 Woman, which lays out the principles of her ministry model. It’s the role of older women to help her understand her priorities.

Those priorities may include rising early to feed the family, being available anytime to satisfy a husband’s desires (barring a few “ungodly” or “homosexual” acts), seeking his approval regarding work, appearance, and leisure, and accepting that he has the “burden” of final say in arguments. After a wife has respectfully appealed her spouse’s decision—a privilege she should not abuse—she must accept his final answer as “God’s will for her at that time,” Peace advises. The godly wife must also suppress selfish desires (for romance, a career, an equitable marriage), practice addressing her spouse in soothing tones, and maintain a private log of bitter thoughts to guide her repentance. “If you disobey your husband,” Peace admonishes in The Excellent Wife, “you are indirectly shaking your fist at God.”

The popularity of her audiotapes and books, translated into several languages and used as curriculum by Christian women’s groups, has made Peace a celebrity in fundamentalist circles, with appearances at conferences and Bible meetings throughout the world. But she’s just one among hundreds of professional Titus 2 mentors, older women who help younger ones—as outlined by Apostle Paul in Titus 2:5—”to be self-controlled and pure, to be busy at home, to be kind, and to be subject to their husbands, so that no one will malign the word of God.”

The mentoring tradition, carried out largely by thousands of lay churchwomen, fell into neglect starting in the 1960s—its leaders blame feminism—but has since enjoyed a strong resurgence in congregations ranging from the millions-strong Southern Baptist Convention to the constellation of independent Reformed evangelical churches. (Saddleback megachurch pastor Rick Warren, Obama’s controversial pick for the inaugural invocation, also preaches wifely submission. The church website cites Ephesians: “So you wives must willingly obey your husbands in everything, just as the Church obeys Christ.”)

Titus 2 ministering can take many forms: one-on-one sewing and housekeeping instruction, submission-centric books and magazines—one of the oldest, Above Rubies, boasts a print run of 150,000—and speaking engagements ranging from Peace’s intimate dinner talks to Promise Keepers-type stadium rallies. Together, these ministries form the backbone of what its adherents call biblical man/womanhood, complementarianism, or simply the patriarchy movement.

This article is adapted from Kathryn Joyce’s Quiverfull: Inside the Christian Patriarchy.

Martha Peace on how to be the wife God intended

In preparation for Peace’s supper session, Jonesboro’s churchwomen, dressed Southern-belle modern in garden-printed blazers, filmy blouses and pearls, and elegant updos, shuffle through a buffet line collecting plates of baked chicken, pasta salad, and a green salad adorned with flecks of chocolate. With everyone settled, Peace, whose short dark brown hair closely frames a stern, youthful face, takes the podium to regale the ladies with tales of her marital missteps three decades past.

She breaks the ice with a laundry list of “I’d just be happy if”demands she’d put on her husband before she was saved at age 33. She’d just be happy, she mockingly recalls, if they got married, had a child, moved back to Georgia from her husband’s military post in Germany, had a second child. The women laugh as Peace mimics his “okay” in the crushed monotone of a henpecked sitcom hubby. She continues, describing her slide from demanding wife to substance-abusing, adulterous, career-worshipping feminist who farmed her children off to babysitters, nearly left her marriage, and even contemplated suicide. Only then did she find God and begin her transformation to “excellent wife.”

The ladies are familiar with Peace’s narrative, a story of female salvation that comes from accepting God’s intentions—salvation, in particular, from the deceptions of the “egalitarian” feminist worldview. Peace calls her story “the taming of the shrew,” a coinage her protégés adopt in describing their own wifely conversions.

Sensitive to charges that her busy career might contradict her message, Peace reassures audiences that she ministers only to women, and only under her pastor’s supervision. Indeed, the Titus 2 movement finds its most prominent voices in the Kentucky-based Council on Biblical Manhood and Womanhood and a roster of conservative male theologians that includes John Piper, founder of Desiring God Ministries; John MacArthur, megachurch pastor of Grace Community Church; Albert Mohler, president of the Southern Baptist Theological Seminary; and Bruce Ware, president of the Evangelical Theological Society, who caused a public stir last June when he told a Texas audience that domestic violence often stems from women’s lack of submission. (Mohler irked fellow hardliners last fall when he and others reached for loopholes to justify Sarah Palin’s candidacy as biblically permissible. “Palin represents the feminist lie that a woman can do it all,” countered one critic at fundamentalist website VisionForum.com.)

These church leaders argue that a generation of women has abdicated its sacred responsibility by ignoring biblical directives that used to reign unchallenged. In addition to the “corrupting” influence of feminism on the wider culture, they fear feminization of the church by female-majority congregations, the concept of a soft and womanly Jesus, and the elevation of women to positions of church authority. Their concerns extend to questions—on Christian marriage counseling; on women speaking in church or exercising authority over men as, say, teachers or cops—that are nearly as divisive in conservative churches as gay marriage is in mainline denominations. “A lot comes into this,” Peace tells me. “Not just husbands and wives, but women as pastors, women in church. It’s not a matter of ‘Good Christians can differ on the issue.’ This is a slippery slope they’re on. It’s like wherever the world goes, 30 or 40 years later, the church goes, too.”

As an alternative, the movement offers a “separate but equal” division of duties and authority. Men, the embodiment of Christ, are the breadwinners and spiritual leaders in worship, decision making, finances, and sex. Women, representing the church, are encouragers, “completers,” and helpmeets, bound to transform the culture by example and to sacrifice in God’s honor.

Reaching this austere conviction via shared women’s study is a process that oddly parallels the protofeminist consciousness-raising groups of the ’60s and ’70s, in which women recognized their common complaints as part of a larger pattern of oppression. Gloria Steinem called those groups “the primary way women discover that we are not crazy, the system is.” But the Titus 2 message is precisely the opposite: The Lord’s system is righteous, ungrateful feelings are sins to be surmounted, and feminist rebellion is a cultural scourge to be eradicated. The radical leap taken by Titus 2 women is unconditional surrender—an army of Phyllis Schlaflys, fighting for their own subordination based on the promise that the meek shall inherit the Earth. “It is a revolution that will take place on our knees,” writes author and Peace’s contemporary Nancy Leigh DeMoss.

And a revolution it may be. In October, more than 6,000 women turned out for DeMoss’ “True Woman” conference in Chicago, affirming their holy duty to leave a legacy of “fruitful femininity” for the next generation.

“You don’t have to be a damsel in distress,” Peace reminds the women of Jonesboro. “God has already ordered your steps and has a perfect plan to accomplish his will in your life.” Around the Sunday-school hall, plastic dinner plates pushed to the side, dozens of women bend over their event programs, not praying just yet, but taking notes in the margins.