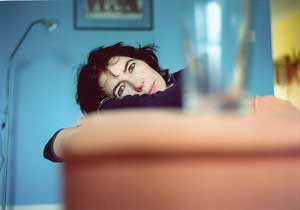 Kim Longinotto’s documentaries are uncharted territory for America. Yes, she won the Outstanding Documentary award at the San Francisco Gay and Lesbian Festival in 1995, but her fame is more deeply felt abroad, where her movies have garnered two Cannes awards, a BAFTA, and a Peabody. Her most recent film, Rough Aunties, follows a diverse group of women who fight to protect children’s rights in post-Apartheid South Africa; Sisters in Law tackles the cultural silence surrounding spousal abuse in Cameroon; and The Day I Will Never Forget investigates female circumcision in Kenya.

After over a dozen films challenging cultural paradigms from Tehran to Tokyo, this week the New York Museum of Modern Art opens a retrospective of Longinotto’s work.

She spoke with Mother Jones recently about marital rape in Afghanistan, film smuggling in Iran, and what the Internet does to documentary film.

Mother Jones: When did you know that you wanted to make films?

Kim Longinotto: I always thought I was going to be a writer. I went to university to study literature, and I think it was then that I realized that writing is a solitary thing, and that I wanted to tell stories, but maybe I could tell stories with film. I had been very solitary up until then. I’d love to be able to write, but I’m not any good at it.

MJ: What in your experience made you so determined to make films about the people who are perhaps the most difficult to seek out‚ those without voices?

MJ: How do you prepare to make a new film?

KL: I read a lot. But I don’t do that thing where you spend lots of time without the camera before you film. That always seemed very strange to me. I always have the equipment from the very first day with me. Because that’s what I’m there to do. I’m there to make a film; I’m not there to be friends in a way separate from making a film.

MJ: So do you become friends with your subjects?

KL: I sometimes think that making a film is a bit like falling in love. I do tend to kind of really love the people I’m filming. The sort of sad truth of it is that you will never be that close again; you’ll never have that intense relationship ever again with them. I always want to keep in touch, but sometimes their lives have moved on and are so different, and they don’t particularly want to keep in touch either.

MJ: How much of your incentive comes from wanting to make change in activist mode versus telling stories in documentarian mode?

KL: I think the primary thing is to tell a story. But I wouldn’t be doing it if I didn’t hope in a small part of myself that it would be of some use. I don’t know if films can actually change things; I think films can be part of a change and celebrate something that’s changing whether the film was there or not, but I think the film can then be used by the people to push the change a little farther forward.

The rough aunties in Durban are really keen to show the film and they say it’s a way of getting their ideas and what they’re going through out. Up until now, they’ve been going around to schools and colleges. Whereas this way, the film can go without them.

MJ: Some of your films seem to deal with redemption and succeeding over these big obstacles. Can you gauge the effect films have on the communities?

KL: I’m very clear that the films have a huge effect on the people in them—making them does. For example, Sisters in Law. People say that it’s very weird that the first two convictions of spousal abuse‚ after the two judges had been working for 18 years trying to get a woman to take her husband to court‚ happened in the three months that we’re there. So then you think, okay, you’re with somebody every day, saying what you’re doing is very brave, you’re at the divorce court with her, you’re following it through. So that’s going to give her the incentive to keep going on with it. It’s a very shifting thing.

I know when she went to the divorce courts, she really wanted us to be there and yet, when she went back to her community after she had won, the first thing the women there asked her was, “Were you the only woman there?” And she says yes. She’s forgotten that we were there. It’s a strange thing; you can’t really quantify it. It’s almost like you can’t really hold onto it—what the extent of your influence was.

MJ: Feminism often lacks male voices or male perspectives. What is your process for including male voices and characters in your films?

KL: I’m always really pleased if they’re there and that they can be part of the film. If they’re not there, they’re just not there. A weakening thing tends to happen where men have a lot of control and power and don’t have to fight for anything. I was always amazed in the divorce courts in Iran about how passionate and eloquent the women were and how the men were trailing behind them like kids and appealing to the judge for help. So that’s the other side of not having any power—you learn to fight for it. If you’ve got everything for you too easy, maybe you lose that attribute; you lose being able to [fight for] it.

MJ: The marital rape law in Afghanistan: Do you look at the news like that and see a documentary film?

KL: I did read about that, and I was really upset about it. When I think of a film, I’m thinking of characters and a story. That’s an important film to be made, but I wouldn’t know how to do that one, unless there was a woman or a group of women that you could film.

MJ: You’ve made films in some pretty hectic places. What are the biggest obstacles you have encountered?

KL: I always think, “Oh, this one will be easy,” but there’s always a chain of horrible things in each one. There are also really wonderful things in each one, like the deep pleasure that comes in the moment when you’re filming something, and you’re imagining people watching it as you’re filming it. You’re thinking, “This is a wonderful scene.” You become schizophrenic because you’re watching as it’s happening and you’re watching it as a film at the same time. So I love doing them, and I hate doing them. It’s a very contradictory thing.

MJ: How does working in other languages that you don’t speak affect how you film?

KL: Once you’re doing the film and you know who the characters are and you know what their stories are, it doesn’t matter. And sometimes it actually protects you a little bit. For example, when Amina in Sisters in Law was going through her divorce in the divorce court, and you have the four men on the desk, and you’re following people’s expressions. You’re following the action.

MJ: How do you mean that it protects you?

KL: In that scene, one of the judges said to her, “We’re going to send you back to your husband; he’ll split you open.” He said something really foul and I didn’t know that he’d said that. So in a way it makes it easier for me to film it. It makes it easier not to get upset.

MJ: Documentary film has exploded with the expansion of internet media. Is it a good or bad thing for the medium?

KL: I love the Internet. I read somewhere that some Google guy said when he was at college, the computer used to take up one whole floor, and now all our iPhones are 10 times more powerful than that one computer. So what we will be doing in 10 years time, we can’t even imagine now. I find that really exciting.

I don’t think my way of making films has changed much. I’m gradually getting better at using a camera and gradually getting better at filming a scene. I’m trying to make it as transparent as possible so the audience is not worrying about the camera, they’re not worrying about the filmmaking. They’re actually just in the scene. I think that’s what you tend to feel in fiction and that’s what I’m trying to get you to feel like in the documentary.

MJ: Is there a film someone else has made that in your mind really succeeded?

KL: Lives of Others made a huge impact on me. Through watching these people, [the main character] grows to respect and admire them, and it changes his life and changes him. I suppose I realized this in retrospect because in a smaller way, that’s what I was hoping to do with the films I make. I’m hoping people will love the people in the films, and by getting close to them it will enrich their lives or make their lives feel changed by these people.

MJ: It seems like the US has missed out on your films, while you have won international awards for decades. Why is that?

KL: I think the places where I have made the films have seen them. I think a lot of Iranian people have seen them. [The subject] was something people really cared about. People would smuggle [Divorce Iranian Style] into Iran because it wasn’t allowed. So maybe [it’s] because I haven’t made a film in America.

KL: In August I’m going to make a film in India.

MJ: Can you tell me anything about it?

KL: Yeah. It’s about some amazing women who are challenging the whole caste system. Before I make films, I always think, “Can I really do it?” Even when I’m telling you about it, it doesn’t seem real or possible. But when I get there, I suppose it will seem easier.