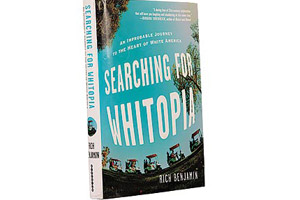 By the middle of this century, white Americans will no longer be in the majority. Yet even as the country grows more diverse, nearly all-white enclaves are on the rise. Richard Benjamin, a senior fellow at Demos, a think tank, spotted this trend several years ago and began venturing into these suburban and rural “Whitopias” to find out what makes them tick. His resulting book, Searching for Whitopia: An Improbably Journey to the Heart of America, is a lively and perceptive foray into communities that are trying to bail out of the melting pot.

Benjamin, who is African American, profiles several Whitopias—defined as rapidly growing areas at least 90 percent white—from southern Utah to Manhattan’s tony Carnegie Hill neighborhood. He embeds in gated communities where garish homes are protected from nonexistent crime by elaborate security systems. He plays a lot of golf and poker and becomes a regular at a Baptist megachurch in Georgia. He also becomes the first black journalist to attend a three-day retreat for white separatists in northern Idaho (where he’s welcomed with brisket and strawberry lemonade). “I was surprised by what a pleasant time I had,” he says. But he’s disturbed by how these bastions of whiteness are often animated by racist attitudes, particularly toward Latinos, and a divisive belief that we can’t all get along. “America has delightful people who are perfectly comfortable with widening segregation and yawning socioeconomic inequality that often breaks along racial lines,” he writes. “Let’s call that a problem.”

Mother Jones: What inspired you to go live in these white communities?

Richard Benjamin: I had been hearing on-the-ground buzz that white folks were moving to places like Bend, Oregon, and Coeur d’Alene, Idaho, and St. George, Utah. That led me to discover through census data that these towns were already extremely white and they were becoming, in most cases, even whiter. Statistics could only tell me so much; in order to get to the spirit and essence of it, I had to immerse myself.

MJ: What surprised you the most?

MJ: At one point a white Idaho grandmother asks you, “Don’t you want to stick to your own kind?” What did you say to her?

MJ: How are Whitopias of the Deep South, where there’s such a history of racial tension, different from the Whitopias in communities where residents feel like they’re starting fresh, racially and culturally?

RB: In the pioneer West Whitopias, immigration tended to be the dominant social and racial issue. In Forsyth County, Georgia, immigration is still an issue, but because you have that complicated history of the Trail of Tears and slavery and Jim Crow, the Whitopia has a different flavor. The interesting thing about Georgia is, Atlanta is teeming with middle-class black people and black people with money—and yet there is still segregation. So you have a type of segregation that has nothing to do with class. And, of course, there isn’t really a black population in Idaho or Utah.

MJ: Who’s mowing the lawns, working retail, and nannying the kids in these Whitopias where they complain that immigrants take away jobs?

RB: It depends. In St. George or Coeur d’Alene, I would say that the intimate manual labor—i.e. house cleaning, child care, elderly care, and medical care—is done by working-class white folks. The construction and agricultural labor and lawn service labor is done generally by Latino immigrants who do not live in the county. So the county is extremely white, but you will see some Latinos doing the labor I just described.

MJ: So when people tell you, “I want to live among my own kind,” they really are talking exclusively about race?

RB: Not always. Sometimes they do mean class. The wealthier whites may not realize that the working-class whites live there. I do believe that “my own kind” really has a strong class dimension and not just a racial dimension in some cases.

MJ: You talk about the transition of acceptable racism from blacks to brown-skinned people. Could you have written this book if you were Latino?

MJ: Do you still think people were totally honest with you? Would they talk about immigration but not about black-white relations?

RB: I don’t believe so, because there were such shocking things said about black people. It didn’t feel like anyone was holding anything back. For example, one person said, “I just don’t know what to call you people this year, so when I’m in all-white company I just use the N-word.” Another person frankly shared with me his opinions on Jesse Jackson and Al Sharpton. Another person told me how they didn’t want public transportation because that just brings in “low-income blacks and crime” to Forsyth County, which is an hour north of Atlanta. So I got some pretty frank discussions of black-white race relations, although my focus and their focus tended to be on immigration and on brown-white.

MJ: Do you think the Whitopians would ask you to play golf and become part of their community if you were really moving there?

RB: There were several things to my hospitable treatment. One thing was genuine—there was a genuine warmth. Another thing was class. In other words, I’m perceived to be a certain class. I would forget that I had my golf cleats on and I would go on a home search or I’d go to a dinner party, and that would be an opening to a conversation. But another thing that really speaks to the spirit of your question is the question of volume. One black man is fine and will be treated very well, but what if I brought 50 of my black friends from New York City? We have the answer to this question: When well-qualified, upper middle-class blacks or Latinos or Asians move to predominantly white neighborhoods, there’s what’s called the tipping point. That tipping point is generally 15 percent; at 15 percent you begin to see white flight.

MJ: You say the majority of Whitopians are quite nice, but there is still harm in how they choose to live.

RB: Absolutely. There is tremendous long-term harm when Americans accept ethnic and class balkanization as a de facto fixture of American life. I think that impoverishes our understanding of each other. I concede that segregation can allay social tensions immediately, but it further debilitates us in the long run. By 2042, whites will no longer be the American majority. Therefore, with growing and intermixed minority populations, our democracy can not work optimally unless all people are integrated as full and equal members, and I think our collective freedom requires that.

Another problem with segregation isn’t that people can’t live in peaceful harmony singing “Kumbaya”—although that wouldn’t be bad. The problem is that many of these Whitopian communities are taking state, local, and federal resources with them.

MJ: Are we on our way to seeing more Whitopias?

RB: It remains to be seen what will happen with the economic recovery and the housing market. We’ll have to see how this plays out in the next three years. I do see pockets of Whitopia that are not affected by the downturn. For example, Louisville, Colorado, which was just voted by CNN and Money magazine as the best place to live, is a veritable Whitopia that is unaffected by the housing crisis and even the severe recession. You look at the best places to live, according to Money‘s 2009 list, and 9 of the 10 are Whitopias.

MJ: Is there a future scenario where there will actually be Blacktopias and Browntopias, too?

RB: Oh goodness, I hope not. I hope we have American-topias.