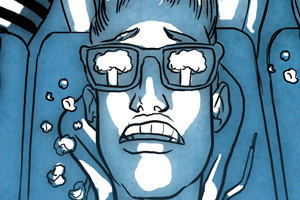 THE UNITED STATES is about to launch a rocket in Norway to study the northern lights. It dutifully informs Moscow. But somehow, the Russian strategic command doesn’t get the memo. When Russian radar spots the four stages of the rocket, the military concludes that four nuclear warheads may be heading toward Moscow—the opening shot of a nuclear war. The military tells the Russian president that he must fire nuclear missiles at the US before it’s too late. But the president simply cannot believe an attack is under way. He violates one of the core principles of nuclear warfare—launch on warning—and orders his generals to keep their nukes in the silos. A nuclear holocaust is averted.

This is not the opening sequence to a big-budget popcorn movie. It actually happened, in 1995—sort of. The Russian military told then-president Boris Yeltsin an unknown missile had been launched. The nuclear-command briefcase (a.k.a. the “football”) was brought out in case Yeltsin had to order a counterstrike. Eventually, the rocket fell into the sea.

The still-too-close call is one of the many hair-raising anecdotes in a new documentary, Countdown to Zero, from Hollywood megaproducer Lawrence Bender, who also made An Inconvenient Truth. Four years after that blockbuster, Bender is trying to insert nuclear disarmament into popular consciousness the way he did with climate change—and this time, it’s an even heavier lift.

Countdown to Zero is a splashy and distressing look at nuclear security and nonproliferation, packed with frightening accounts of uranium smuggling and assorted near-misses. In a jailhouse interview in Russia, a former uranium worker explains why he swiped nuclear material to sell: He needed money for a new fridge and stove. (He was caught only because he was hanging out with members of a car-battery-theft ring that got busted.) A former National Security Council staffer recalls attending a meeting with a colonel who told him not to worry so much about nuclear war, since it would only kill 500 million people. A onetime nuclear launch officer relates how he and another officer could have gamed the system to fire nuclear missiles on their own. Nonproliferation expert Joseph Cirincione notes how easy it is to smuggle highly enriched uranium; hiding it in kitty litter works well. It’s the ultimate horror movie.

There hasn’t been a major Hollywood attempt to generate buzz about nuclear weapons policy since The Day After, a seminal 1983 made-for-television movie starring Jason Robards that followed the plight of a group of Midwesterners struggling to survive in the aftermath of a war with the Soviets. Nearly 100 million Americans watched the film, including President Ronald Reagan—who wrote in his diary that the movie was “very effective and left me greatly depressed.”

Countdown to Zero was born in 2007, when Bender (whose producer credits include Pulp Fiction, Kill Bill, Good Will Hunting, and Inglourious Basterds) got a call from Jeffrey Skoll, the founding president of eBay and chairman of Participant Media. Skoll and his partners had created Participant in 2004 to produce quality movies that could inspire filmgoers to become activists. Besides Bender’s An Inconvenient Truth, they’d made Syriana; Good Night, and Good Luck; The Kite Runner; and Charlie Wilson’s War. The founders had hoped to address three big-ticket issues: the environment, nuclear weapons, and Middle East peace. After An Inconvenient Truth, Skoll thought it was time to go nuclear; Bender told him about a group of arms-control experts who were working on Global Zero, a campaign calling for the abolition of nuclear weapons. Their aim was to recast disarmament as a tough-minded policy motivated by national security concerns—namely, the growing risks of proliferation and nuclear terrorism.

Global Zero has amassed a fair amount of firepower; its message has been endorsed by a string of national-security heavyweights, former president Jimmy Carter, ex-Soviet president Mikhail Gorbachev, and celebs such as Richard Branson and Meg Ryan. Skoll liked the idea so much, he decided to partner with the campaign. Global Zero’s parent organization, the World Security Institute, helped finance the film and the campaign is involved in the promotion effort as well.

But can a movie on nuclear horror really get backsides into multiplex seats? This isn’t an escapist thriller—it’s a chilling argument that unless we take dramatic action, nuclear terrorism is a certainty. According to one person who worked on the film, viewers at early screenings complained that the film’s graphic descriptions of a nuclear blast were, well, too graphic. (If you’re within a few miles of a nuclear detonation and your mouth is open, your head will literally explode.) “Getting people to come to a film about nuclear war is not a slam dunk,” Skoll concedes.

Still, Skoll and Bender are optimistic. For months, they’ve been talking to activists and faith groups, as well as contacts at Yahoo, Google, Facebook, and MySpace, about promoting the movie via Participant’s trademark blend of grassroots buzz-building and high-end networking. “We think this movie has a very wide appeal: people who like to go to dramas, smart movies,” Bender says. “We think there’s also a big youth audience for this.” He’s looking for musicians to pump the film (Pearl Jam has contributed a track). The producers expect to book TV interviews for former CIA officer Valerie Plame Wilson, who in the film offers a step-by-step description of how terrorists could obtain bomb material, and Jordan’s Queen Noor, a backer of the Global Zero initiative.

It was just this kind of creative promotion, Bender notes, that got “a billion eyeballs on An Inconvenient Truth before it even came out.” And his new movie has the benefit of good timing, appearing as it does when nuclear weapons are in the news thanks to the Obama administration’s recent initiatives on nuclear policy. It’s an auspicious environment for what Skoll calls the “biggest public awareness campaign about nuclear weapons since the 1980s.” And, Bender says, the film’s shock value will do the rest: “Before I saw Al Gore do his presentation, I was a guy who read the newspapers, watched TV, but I had no idea of the climate change problem. Now, people have no idea about this. They think the Cold War is over. But the nuclear threat isn’t. Our job is to make people aware that we’re sitting on a time bomb.”