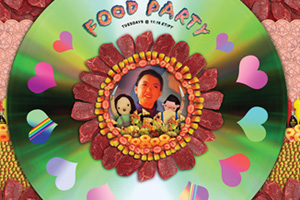 Does doughnut lasagna sound yummy? Then Thu Tran is your Julia Child. Tran is the host of Food Party, the Independent Film Channel’s gleefully anarchic “non-reality cooking show,” which debuted last year to confusion and acclaim. In her DayGlo kitchen, Tran cooks with the help of pals like Peanut Butter Jerry—a guy with peanut butter for hair—and lots of puppets. It’s a cooking show full of recipes you’d never eat and crucial questions like, “Which is harder to get out of your beard, peanut butter or glitter?” (Answer: glitter.) We caught up with the cast enjoying a healthy mid-afternoon snack of Mountain Dew, Thin Mints, and American Spirit Lights outside the show’s Brooklyn studio, where Tran and the crew were filming the show’s second season, now airing on IFC.

Mother Jones: What did you eat for lunch today?

Thu Tran: I ate two barbecue chicken wings, a little bit of mashed potatoes, some potato, leek, and bacon soup, and then I had a half a slice of chocolate cake and an orange soda. We had all these potatoes left over from our shoot yesterday, where we had a stone path made of potatoes. So we’ve been eating lots of potatoes in various forms.

MJ: Do you tend to try to eat stuff that you use on the show?

TT: We try not to waste food in general, but it happens just because it’s a video shoot and lots of things sit under hot lights. The most tragic time was an episode we filmed that was centered around eight turkeys. We really tried hard to have it be salvageable at the end, but we stuck a meat thermometer in it and it was like 70 degrees on the inside. So we had to toss that.

MJ: But not wasting food is sort of a theme on the show.

TT: Yeah, using every part. In my own life it’s like that, ’cause as a meat eater it’s just responsible to eat as much of the animal as you can. It’s also instilled in my family culture, where it’s not even an ethical thing, it’s just that all those parts are delicious, too. You eat the ears, you eat the intestines, you eat the livers, the hearts.

MJ: What would you say is your guilty pleasure?

MJ: Do you cook it or just eat it frozen?

TT: Both. I used to like eating frozen corn straight out of the bag. But I also love microwaving frozen corn and adding butter and sugar and garlic powder and chili powder to it. And sometimes I just like to microwave it and add a little bit of hot sauce to it. My friends always laugh at me when they catch me eating it.

TT: It seems like it happens pretty often—there’s always something that happens that’s bad. About 40 percent of the food I make doesn’t come out so good, only because I’m experimenting and it just doesn’t work out right. It’s always a learning experience.

MJ: You sort of throw things together when you’re cooking. Do you do the same thing with baking?

TT: Baking! I don’t have a very good relationship with baking. I do bake sometimes, but my natural instinct is to just do what feels right a lot, and that’s what you’re not supposed to do in baking. I’m not a good baker. I like the idea of baking. I’d like to be good at it. But I feel like I’m young and one day I can be.

MJ: How old are you?

MJ: Did you have an Easy-Bake oven when you were little? Did you cook?

TT: I didn’t have an Easy-Bake oven, but I cooked a lot when I was young. But more helping. In my family it’s very much a hierarchy with cooking where, when you’re young, you do kind of like the bitch work, you know. Like you have to wash dishes, or you have to peel all the wonton skins or the eggroll papers or you wash all the greens. But you watch what everyone else is doing. Even now when I come home, I’m in the same spot, because I’m still cooking with my same relatives, with my mother and my aunts and my grandma or my dad. I’m still in the same spot. My younger cousins are still really, really young. I’m in the generation right now where we’re supposed to be having children who we can boss around to do those things, but none of us are having kids yet.

MJ: There’s a touch of Pee-wee Herman in the show. Did you find him inspiring or scary or both?

TT: Both! I loved Pee-wee’s Playhouse as a child of course, and when I was making the set, I did look to it for inspiration sometimes, because it was very fun. In a very “Who cares?” kind of way. There’d be—I remember, he had a mural of cowboys and Indians on one wall and just a really fun pattern on another wall. Everything spoke. But he himself—he was like a walking cartoon character, and that was so amazing to me. It’s definitely an inspirational show.

MJ: You say you strive to create visual MSG. What does that mean?

TT: MSG is a flavor enhancer—it’s natural, but it’s also very artificial. It’s something that’s added to something that’s already kind of good, almost like a surface decoration. When you put it in your mouth, it leaves your mouth watering so you want more. So you keep eating whatever it is, even though it might or might not be good for you. Well, I don’t want to tell people what to think. I just want to show people what I think. A lot of the material we use to make the show, it’s junk. It’s cardboard and it’s pom-poms and it’s glitter and it’s paint.

MJ: How long does it take to make a set?

TT: I work with a team of about six artists or so, and to make the basic kitchen set would take about a week. But things always get picked apart along the way, especially this season. The kitchen gets changed up almost every episode. I don’t know, it depends on how elaborate the set is. A really simple one could take an hour or two, and a really complicated one, like an outdoor garden that’s really lush, could take up to two weeks.

MJ: Who is your target audience? What is your audience made up of now?

TT: Initially when we were making the show, I just sent it out to art galleries; I thought it was for art people. I was making these videos I construed of as art videos, and making a TV show the format for these videos. And so initially, I guess it was the people who would go to art galleries. But I did want to open it up to as a wide an audience as possible, and my friends were like, “Throw it up on YouTube, who cares?” So I said OK, and I did. It opened it up to a much wider audience that way, so you didn’t have to go to some little gallery in some city and have this one-month window where you could see it; it’s up all the time whenever you feel like it.

MJ: Do you watch cooking shows? Why do you think people watch Food Network?

TT: It’s very meditative to watch those shows. I mean, you might be taking notes, but you’re probably not. It’s meditative to watch someone cook, just like it is to watch your mother cook, or anyone cook. I watched a lot of cooking shows when I was younger on PBS and TLC and those channels. It’s a very cool genre of television. Instructional programming is really great. To me, it’s very enjoyable to watch a process.

MJ: Is that something you’re incorporating into this season?

TT: Yeah, yeah.We’re trying to return back to a cooking-show format a bit more. At the same time, I always feel in a funny place when I’m really asked to inform people, so I just try to take the more absurdist route—like, “this is how you could do it, but it’s actually turning into a cat now. This might happen at home I guess, but it probably won’t.”

MJ: Who do you look up to in the kitchen?

TT: I look up to my father, because he’s very, very experimental in his cuisine, and he puts a lot of love into things. He’s the best. To me.

MJ: What do your parents think of the show?

TT: I think they watch it. They tell me they DVR it. I send them DVDs. They’re happy that I’m doing something that I enjoy and that I’m able to do it, and that I’m busy. But they’re always kind of like—they want to see me in a normal job. They want to see me be a bank teller. They want me to be a lawyer or something like that. Something steady. That’s always their main concern as parents: “Oh, you need a salary, you need life insurance, why aren’t you having kids?” But in the end, they’re happy about it.