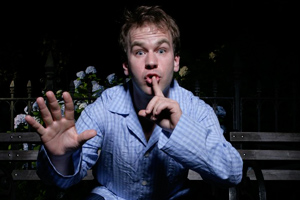 Update: Since this interview first appeared, Birbiglia co-wrote and directed the film Sleepwalk With Me, which won an Audience Award at Sundance and premieres August 24 in New York City.

Eight years ago, comedian Mike Birbiglia began dreaming of a “hovering, insect-like jackal” hanging out in his bedroom. To defend his girlfriend from the mirage, he would jump up on his bed, strike a karate pose, and yell: “Abbie, there’s a jackal in the room!” Birbiglia had drastic reactions to other dreams, too—in one, he stood on an imagined podium to accept a medal…and then awoke falling on top of his TiVo console, breaking it. As he writes in his new book, Sleepwalk With Me: And Other Painfully True Stories: “I thought, This seems dangerous. Maybe I should see a doctor. And then I thought, Maybe I’ll eat dinner. And I went with dinner.”

So the sleepwalking continued. One night, after a performance at a college in Walla Walla, Washington, Birbiglia ran full-force through a glass window on the second story of his hotel to escape an imagined missile intent on demolishing him. “I jumped through a window…like the Hulk!” Birbiglia told the emergency room attendants.

Birbiglia’s condition, called REM behavior disorder, provided him with plenty of quirky material for his comedic performances, appearances on This American Life and The Moth, and his entry into the writing world. Sleepwalk With Me explores his somnambulant battles, attempts to fit in during adolescence, obsession with Mitch Hedburg, and tendency to ignore his father’s advice. Direct and self-deprecating, Birbiglia never shies from giving us all the painful details of his mishaps. Mother Jones talks to the comedian about this unwavering honesty and his upcoming projects.

Mother Jones: How do I know you’re not sleeping right now during this interview?

Mike Birbiglia: That’s a good question. I think that if I were dreaming, I wouldn’t be speaking so coherently. Usually, if I had an incident, I’d be shouting or mumbling. I don’t really usually speak in complete sentences.

MJ: Do you have any favorite movies about sleepwalking or dreaming? Like Inception, for instance.

MB: I didn’t see that, actually. I want to. I like Donnie Darko; it’s a cool take on dreams and sleep. In some weird way, Eternal Sunshine of the Spotless Mind has some of that. Techies come over and sleep overnight at this person’s house—yeah, I like that movie a lot.

MJ: You’ve written how, when something embarrassing or confusing happened during your childhood, your dad would say, “Don’t tell anyone.” Despite that, your stories are fearlessly candid. Is there something in your personality or your life that has led you to be so honest?

MB: I think it was just that my mother’s the opposite—she’s a real talker. And I think spending a lot of time with my mom, who’s a talker and a storyteller, and my dad, who has kind of a soft-spoken, understated sense of humor, I think that’s how I became what I am, which is sort of an understated storyteller.

Awkwardness and feeling alienated are always going to be a part of comedy.

MJ: Are there topics you’ll never reveal to your audiences?

MB: I’ll pretty much tell them anything from my own life. I think the thing I had to be careful about while writing a book was not to say anything that was revealing about other people that they would be uncomfortable with. I didn’t want to make people angry—that’s a real risk.

MJ: Have you gotten in trouble in the past with people?

MJ: You’re talking about personal stories about sleepwalking, struggles with girls, and your relationship with your dad, and the rest of the country is talking about “Aqua Buddha,” Mama Grizzlies, and  Juan Williams. Why do you feel compelled to keep storytelling on a personal level during these super-politicized times?

MB: I don’t even know what that is, Aqua Buddha? I think, generally, political discourse makes me depressed. I try not to watch it because it just gets me down. The people who are the worst at news, who kind of engage in what I call the World Wrestling of news, have kind of set the bar for where news is. You know, since they rate well, everyone’s kind of like, “Well, we gotta get more like the World Wrestling of news.” And, I think it’s really unfortunate that that’s kind of the status quo. I’d say it’s almost these faked arguments that are drummed up for dramatic purposes, but there’s not necessarily a whole lot there.

I feel like people have more in common than the news reports. People getting along doesn’t sell very well in the news. I find that to be deeply depressing. I don’t even talk about it on stage, because it would take too long to explain. I’d have to spend an hour on it to get people to understand what I’m saying because it’s so instantly polarizing. Because cable news has kind of set up a construct where you’re for or against something immediately. So if I said something about it, people would be for or against me immediately. And I don’t want that. So, what’s the point?

MJ: You make yourself out to be a pretty big dork. Self-deprecation is pretty hip these days; Michael Cera’s characters, for instance, often do well. Was there a point when you realized that you could use your awkwardness to your advantage?

MB: I’m pretty sure I started doing it before Michael Cera was born. I think I’m in the clear on that one. Yeah, what I do, which is storytelling and awkward painful stories, it does sort of seem to be in vogue right now. When I started doing it, it wasn’t. I guess that’s sort of fortuitous.

MJ: Was there any point you realized you could use that to woo women?

MB: No, as a matter of fact, I think if anything, the fact that it’s popular right now makes me go: “Well, I guess I’m going to start doing something else then in the next few years.” I dunno, it almost feels hackneyed at this point. To start a premise by saying, “I did this awkward thing.” But then again, awkwardness and feeling alienated are always going to be a part of comedy. Alienation, I suppose, can’t be hackneyed because it will always exist. So I guess it’s just how you do it.

MJ: Kind of related to that, the whole sleepwalking thing has kind of taken over your book, your tour, your website. What are you thinking about exploring next?

MB: My new one-man show—which right now I’m touring with material from—is called My Girlfriend’s Boyfriend. It’s all about love and heartbreak and themes like marriage, and whether or not marriage is a good idea.

MJ: You moved from using stand-up comedy to tell stories about sleepwalking to actually writing these stories down. Why did you choose to write a book?

MB: I did all these pieces for This American Life and The Moth, and I did a one-man show, and it just kind if seemed to logically dovetail into writing a book. And actually it was a really great writing exercise. I’m writing a screen adaptation of Sleepwalk With Me now. All of the various genres of writing make you better as a writer in general. Writing a book—I had some trepidation at first, but now that I’ve done it, I’m very glad.

MJ: In the film Sleepwalk With Me, would you play yourself?

MB: Yeah, that would be the idea. I’m an actor, and the part is a variation on me, so if I don’t get cast, I’m going to be furious.*

*In the film Sleepwalk With Me, Birbiglia does, indeed, star as the character Matt Pandamiglio, based on himself.