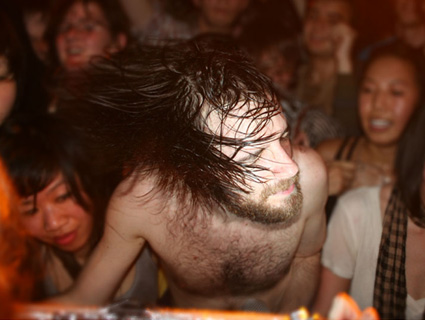 When I arrive at the scene of a Girl Talk show in Oakland, California, one recent rainy night, front-man Gregg Gillis is just 15 minutes into his set. At center stage, Gillis is in a glowing neon light box, hunched over his laptop, T-shirt and hair soaked. He’s bouncing left to right so intensely that the sweat on his hair sprays over his table. His laptop is bandaged in plastic for protection. A thick crowd of 70 people is moshing around him on stage. The air is already moist from the sweaty bodies smashing into each other.

Gillis, who has gone by the stage name Girl Talk for the last decade, fills an unconventional gap bordering rogue punk rocker, underground DJ, and international pop-star. In hip social circles, he’s a household name. Many of his live shows sell out within a day. He has 22,693 Twitter followers. (He follows just one: Soulja Boy.) A few weeks after he released his latest album, All Day, the city council of Pittsburgh (his hometown) designated December 7 as Gregg Gillis Day. But by standard measure, he remains under the radar. It’s not clear how many of his five albums he’s sold thus far—some are sold in stores but others are downloadable with a donation. He peaked at number 14 on Billboard‘s ranking of “uncharted” artists, which is measured by the frequency of streamed plays, page views, and followings on sites like MySpace and YouTube.

Gillis, formerly a biomedical engineer, is best known for his ability to throw a fantastic party. He strikes the emotional chord of his crowd so perfectly that he appears to posess a prodigious intuition about it. “It’s second nature to him,” says Jaime Herrero, Gillis’ long-time friend who handles the stage props.

Before each show, Girl Talk crew members talk about planning for what they call “choreographed chaos” or the “big moments.” (See video below.) This is when Gillis builds things up to a climax, with a result both real and dreamlike—akin to being at a rave in outer space where the Beastie Boys and Cindy Lauper are singing an anthem in your honor and Biggie Smalls has reincarnated from the afterlife to join in. His table pulsates with neon lights that tint your face pink, purple, and green. Confetti and balloons shower down on you from above. Thousands of limbs armed with glow-sticks flap back and forth to booming hip-hop rhythms leavened by punk guitar riffs and pop melodies tired out on the radio. Near the front row, a guy jumps up to catch the waving hands for a surf. You’re dancing and shouting along to the song, except it’s to 30 different songs instead of one. Then you wake up and can’t seem to recall how you got there in the first place.

Photo by Graeme Flegenheimer.These high-impact moments are refined byproducts of Gillis’ meticulous experiments: countless hours of cutting and pasting together samples and testing them on live audiences for more than a decade. His live experiments have come at a physical cost. Though Gillis does not have any tattoos, he wears scars from all the times he jumped off stage, and engaged in other antics that have come to define his performances ever since the early days, when his shows were raw and confrontational.

In 2000, when Gillis started performing under the name Girl Talk, he was simply a man with a laptop. He played in small venues to audiences of no more than 50. “I was serious about music and having a good time, but also poking fun at myself that this is a show with a laptop,” he told me. He would go through multiple costume changes during a 10-minute show (a fraction of his current 75-minute sets) or choreograph a dance for people to engage his audience. He would pour beer on their heads. Even then, Gillis—who at the time was making more abstract-noise-influenced tracks versus the pop-infused mashups he’s now known for—wanted to create an intimate and overwhelming experience. “I get so fired up playing,” he says. He would sometimes get the crowd so riled that fights would break out during his shows.

In 2006, Gillis’ career kicked into high gear with the release of his third album, Night Ripper, which focused “less on beat-fuckery and more on bringing heat to the party.” The album generated praise from Pitchfork, and later in Rolling Stone and Entertainment Weekly. He began headlining shows, and they were selling out. The venues got bigger. “I didn’t have the resources to bring in a choreographed dance team or an indoor pyrotechnician,” he says, so he started to invite people on stage. That became the “focus of the visual element” of Girl Talk performances.

That was also when “shit hit the fan,” says Herrero.

Photo by Shaun Hollingsworth.At one show, Gillis was standing on his table slapping hands with fans in the front row, when someone accidentally pulled too hard. Gillis flipped off the stage and landed on several heads. He cracked his back. Five minutes into another show in Vancouver, a fan threw a can at Gillis’ head, hitting him between the eyebrows. As a blood-and-sweat cocktail trickled on to his computer, the crowd froze for a moment, then went wild. Sometimes Gillis’ table shook so much it would cave in on itself. On several occasions, the audience got so out of control that the venue pulled the plug on him.

“I want to be the sweatiest and taking things the furthest,” Gillis says. Bruising and bleeding are just part of the routine. When going into “tour mode,” he says, he ends up with Achilles pain and sometimes can barely walk due to swollen calves. Gillis doesn’t have a particular physical regimen besides stretching for hours before and after his shows and overloading on vitamin C and water. “This is going to sound totally nerdy…It’s like training for an athletic event, a 10k race, every day,” he says.

Before the Girl Talk days, in high school, Gillis was part of a band that combined noise and performance art. During live shows, he and his bandmates would smash TVs and light fireworks indoors. Once, weirded out by their act, Gillis’ mom ran out of the room in tears. “What they’re seeing now is cake,” he says when I ask how his parents deal with the risk of injury tied to his career. “My mom’s never left a Girl Talk show crying.” Still, there was that time recently, when his family came to his show in Pittsburgh; Gillis impulsively jumped off the stage, flew over his dad’s head, and cracked his front tooth on the landing.

The madness began tapering off in 2008 when Gillis hired David Scheid as his tour manager. The two met at a party Hugh Hefner was throwing for his son’s 18th birthday, where Gillis was performing. Scheid joined the crew shortly afterward and worked his first Girl Talk show that fall in Philadelphia. After Gillis started playing, he invited people up to join him, and suddenly some 150 people were rushing a stage the size of a living room. “I was freaking out,” Scheid recalls. He ran outside and called Gillis’ agent, Sam Hunt. “I don’t know if he’s all right up there,” Scheid told him. Hunt responded nonchalantly: “Dude, it’s fine.”

“It was fun and crazy,” Scheid recalls, “but it gets to the point where the shows where it’s like, ‘It’s getting too big.'”

If Gillis wanted to keep growing, there had to be a few rules. These days, crew members handpick fans to go on stage, and the most avid ones know where to line up if they want to get lucky. Scheid gives them a pep talk: No cell phones or cameras; no bathroom or water breaks. “I tell them to be in the moment and killing it, and not worrying about telling your entire Facebook page that you’re at a Girl Talk concert,” he says. If they breach the code of conduct, they’re out. Girl Talk shows are no longer as aggressive as they once were, says Herrero, but they’re no longer letting the crowd run too wild. “You give them an inch and they’ll take a mile,” he says.

Photo by Graeme Flegenheimer.“As he gets bigger, they really try to maintain the intimacy of a small show,” says Tony Leong, a production manager who’s worked on multiple Girl Talk concerts, including the one in Oakland last month. Creating a sense of intimacy in large venues required bigger props. So for his 2009 New Year’s Eve show at the Chicago Congress Theater, Gillis hired lighting designer Ben Silverstein and producer John Frattalone to build a two-story house on stage. “The idea developed on the tour bus. It took a crew of 20 and six months to plan, but I went there,” Gillis says. “It was a massive project,” says Silverstein. “It was 24-hour days of freaking out.” As a liability matter, only friends and crew were allowed inside the house.

At the Oakland show, Gillis’ crew showed up with a semi full of equipment, lighting panels, and homemade props: 30 pounds of confetti, 50 rolls of Scott 1000 toilet paper (it comes off the roller the easiest), plus 1,000 balloons that Leong had to supply because they’d run out. Unloading and setting up took eight men and six hours, says Leong. After the show, he adds, “Our janitorial crew was there until about 7 a.m. cleaning.”