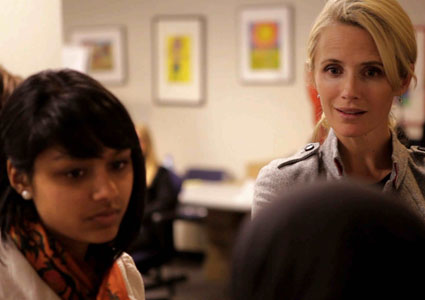 Lately, it seems the entertainment industry is doing alright by women: Tina Fey won the Kennedy Center’s top humor award in 2010, and Bridesmaids, written by and about two ladies, earned loads of accolades this year (and was actually deemed funny by male critics). But the dirty truth prevails that whenever women show up on TV shows and movies, they’re usually seconds away from being objectified, degraded, or flat-out ignored. For every “Hermione,” there are a dozen “Snookis” duking it out over the guy du jour. It’s a reality Jennifer Siebel Newsom intends to make loud and clear in her new documentary Miss Representation, which airs on the Oprah Winfrey Network tonight at 9 EST.

A Stanford MBA graduate and former Hollywood actress, Siebel Newsom began making the film when she got pregnant with her daughter (daddy is California’s lieutenant governor, Gavin). “I wanted my daughter or son to live in a world where women are valued,” she says.

The documentary harnesses a wealth of clips, interviews, and statistics to show that women are being depicted on TV and online as poorly as ever, with dangerous potential side effects for girls sitting on the other side of the screen. Among the film’s shocking stats is the claim that 65 percent of women suffer from disordered eating behavior, and many times as a result of comparing their own looks to those of airbrushed models. The problem lies behind the camera, as well: While the average teenage girl consumes upwards of 10 hours of media a day, women hold just 5 percent of clout positions in the industry.*

And yet, the energy surrounding Miss Representation suggests that plenty of TV and movie lovers want to see change. A stereotypically female quality—being social—may be the perfect secret weapon; Siebel Newsom cites the film’s social media fans (“at one point people were tweeting about us every second”) as a crowd force with potential to spark critical conversations about women in media around the world. “We’re striking a nerve,” she tells me breathlessly. “I’m optimistic.”

Mother Jones: In terms of the attractive class of women that we are all often trying to measure ourselves up to, you sort of fit that mold. You’re tall and classically good-looking. How has that helped or hindered you as you try to deliver a message of acceptance about all body types and appearances?

Jennifer Siebel Newsom: Something I’ve learned myself in making this film is sometimes people have a hard time listening to what we have to say because they’re so concerned about how we look. I think that’s a challenge that women in particular have in our culture. There have been moments, just to be totally frank, where I will put my hair back in a ponytail so I’m taken more seriously. Or, when I was acting, I was a brunette, and people thought I was more intelligent. So that sucks, but that’s part of our visual culture and people want to judge based on what they see when you first walk in the door. But I have hope because women are smart, we have a lot to say, our voices are being heard. If we can just be aware of the image we are projecting so that people are forced to listen to us, verses objectify us, I think we’ll continue to help the culture to make more progress so that ultimately you’re going to start to see women represented in the highest spheres of leadership across the board.

MJ: That’s interesting, because at one point in the film Katie Couric says that by exposing her legs in the early years of broadcast, she was worried she contributed to the problem and helped start the trend for scrutinizing female anchors for what they were wearing. It seems like there’s a fine line between allowing people freedom to express what they want and then making people hyperaware of how they come off.

JSM: It’s a privilege to be in on TV, right? It’s important that anyone’s who’s on TV or in the media in any form is aware of the images that they are portraying. Katie was really talking about balance. There is a fine line. I can’t tell you how many times I’ve made mistakes.

We don’t have to be men or dress like men, though we can if we want to, nor do we have to do the other extreme. Frankly I think there’s somewhere in the middle, and I think it’s this way with politics too, getting to where people are comfortable and people can listen to what you’re saying, and where you’ll be taken seriously.

MJ: Was there a moment where you knew you really had to make this film?

JSM: There were many moments. I had a lot of conversations with women behind the scenes in Hollywood. The big one was that I knew I was going to have children, and I wanted my daughter or son to live in a world where women are valued, and where women don’t have to go through some of the things I went through growing up. And, ironically I ended up becoming pregnant with a girl, Montana, when I started making the film, and I’ve just given birth to a boy, Hunter. But it’s really interesting now, being a mother raising both of a son and a daughter, in a culture that objectifies women and sees women’s value in their youth or beauty or sexuality, and not in their ability to lead. And in a culture that values a hypermasculinized version of what it is to be a man. At MissRepresentation.org, we’re about creating a dialogue about how we empower women and men, or girls and boys, to find their own path and to find value in a plethora of attributes and possibilities for who they can be.

MJ: And you actually worked in Hollywood as an actress for a while.

JSM: I started acting at the age of 28, and my agent told me to lie about my age and take my MBA off my résumé. I didn’t do either, but that was like, whoa! I thought there was value in being smart. I thought there was value and wisdom in getting older. We’re challenging the culture in Hollywood that is all about youth, youth, youth, beauty. Because not even that’s healthy. I don’t care how much plastic surgery people have: At some point, they’re going to die. We’re all going to age somewhere on our body, and we may as well accept that and embrace it. I mean, aging is a beautiful thing; wisdom is a beautiful thing. Frankly, as a woman who’s getting older in our culture, I want to see stories about women who are before me, so I can be inspired—because someday I’ll be there.

“Frankly, as a woman who’s getting older in our culture, I want to see stories about women who are before me, so I can be inspired—because someday I’ll be there.”

MJ: You have made a film about the subject, but it’s much more a documentary—it’s not a Hollywood movie. How much faith do you have in the idea that this type of representation of women can be changed from within the media?

But what’s really cool is just in the past four days, we’ve had thousands of people view the trailer online, we’ve had tens of thousands take the pledge and join us on Facebook. At one point people were tweeting about us every second. We’re striking a nerve and a chord. I’ve had girls from South Africa and Jerusalem emailing us—it’s not just here in the United States. So I’m optimistic. With what’s going on in social media, with what went on in Egypt, what’s going in Wall Street, there’s an energy right now that’s bubbling, and men and women are part of that. We’re talking about not just a women’s movement, we’re talking about a human rights movement.

MJ: Do you think social media is an area that can perhaps counteract the damage that the mainstream media is doing?

JSM: Yes, I do think it can counteract. We’re launching a few campaigns at MissRepresentation.org. One is “Sexy or Sexism?” which we’re launching with the Women’s Media Center. Another campaign we’re launching is where young people are putting up podcasts of themselves and saying how they want to be represented in the media. And we’re going to take that to advertising and media execs. I think there’s power in numbers, and I think we’re building in numbers and building support, and social media is going to be a big part of that.

MJ: TV seems to be obsessed with retro shows. Mad Men, for example, exposes how people’s treatment of women has improved over time, but it also lends an air of glamour to the good ol’ days. What role does this affinity for nostalgia play in this discussion?

JSM: I’ve been wondering that myself. I actually was on Mad Men, and I quite appreciate the history. I think we just need to be aware, especially the writers and creators of those shows. The big thing is that a show like that can expose what we can learn from the past, and where we need to go. In some ways, as Gloria Steinem was saying the other night, “We’re just getting started.” She feels this film is really going to help us reach a tipping point in terms of transforming the culture. But in some ways we’re just getting started given the backlash that’s been directed at women in particular, starting in the ’80s. Maybe we can view those shows as tools to learn where we went wrong, or where we made mistakes in our culture in respect to women. If we can see it in that light instead of just glamorizing it, I think we’ll be able to achieve progress.

An earlier version of this article quoted the following statistic from MissRepresentation.org:”Women hold only 3% of clout positions in mainstream media.” This figure refers to positions in the publishing industry and does not include other forms of media. Based on a study from the Annenberg Public Policy Center of the University of Pennsylvania, women hold 5 percent of clout positions across the mainstream media. The sentence has been corrected.